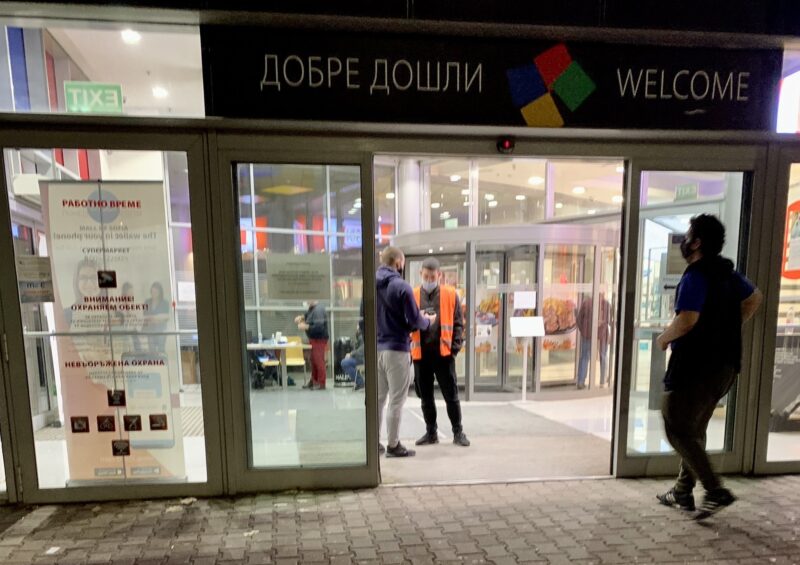 Security staff checks COVID-19 passes of visitors to the Mall of Sofia, November 6, 2021. Photo by Ruslan Trad, used with permission.

One would think that the political crisis, lack of a government, and the holding of the third consecutive parliamentary elections [2] in a year are hard enough situations for Bulgaria, but on November 1, the country with a population of nearly 7 million, hit a tragic new COVID-19 record—over 6,000 new cases and over 300 deaths. Honestly, I, and I'm pretty sure others in the country, don't even know how to describe the failure, tragedy, and stubbornness that led us here.

Bulgaria has the EU’s lowest vaccination rate [3], while widespread vaccine hesitancy fueled by misinformation and a lackluster awareness campaign comes amid political turmoil. As the COVID crisis unfolds and affects more and more sectors of the economy and society, the Bulgarian state is making a transition from more than a decade of rule by Prime Minister Boyko Borisov [4] and his Citizens for European Development of Bulgaria (Gerb) party. Borisov stepped back after nearly a year of anti-corruption protests [5], marked by police violence and wiretapping [6] of political opponents, and even protesters.

This toxic situation was preceded [7] by impunity scandals linked to the Prosecutor General, Ivan Geshev, for refusing to investigate a number of Bulgarian politicians and businessmen who were sanctioned [8] by the U.S. government in June under the Magnitsky Act [9] for links to corruption and human rights abuses. The scandal has become one of the main topics dividing the political elite, and while the caretaker government published a list [10] of 33 companies and 21 individuals connected to blacklisted moguls, the judiciary has not yet taken action against them. Incidentally, Bulgaria is the only European Union member state whose citizens are included in this list. 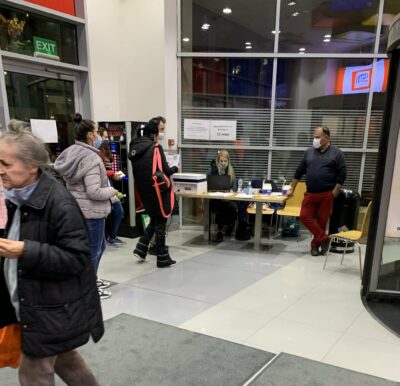 Fast testing of COVID-19 offered to visitors of Mall of Sofia, Nov 6, 2021. Photo by Ruslan Trad, used with permission.

While Bulgaria initially reacted quickly [12] by taking strong measures against COVID-19 in March 2020, Borisov's subsequent handling of the pandemic has drawn sharp criticism because the country was severely affected during the autumn months after a loosening of restrictions over the summer. The interim ministers appointed by President Rumen Radev, with whom Borisov has had a long feud [13], fared no better—the statistics are grim: 3,117 people in Bulgaria who had tested positive for COVID-19 died in October 2021; 100,330 is the number of new cases for one month, the Sofia Globe reported [14]. November can be even harder with all the anti-measures protests [15] going on.

At the time of writing, the whole territory of Bulgaria is already in so-called “dark red zones,” as the cases of COVID-19 infections have passed over 800 per 100,000. A partial lockdown is expected if the number of new cases increases to 1,000/100,000 level, which is already a reality in some of the provinces in the western part of the country, including the capital. 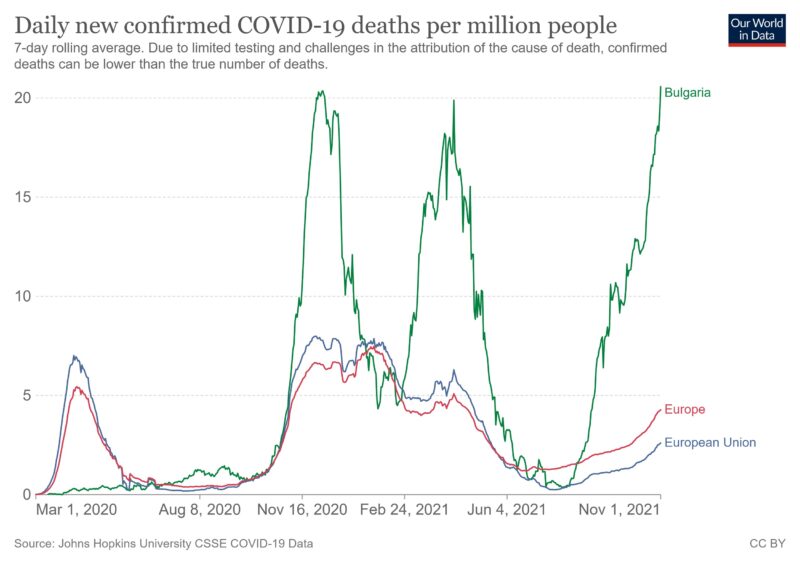 In the background of increasing disinformation and spreading of fake news, as of the beginning of November, there are over 7,000 people hospitalised. In most municipalities, there are no intensive care unit (ICU) beds available. A doctor who works in one of the busiest COVID-19 wards in Sofia told me on October 28:

“Ruslan, I don't know when I will return home – probably not this week.”

While restaurant owners protest [19] against COVID-19 certificates, in Bulgaria's countryside the situation is grim, and there are no available beds in many hospitals.

In the northwestern part of the country, in the provinces of Vidin, Montana, Vratsa, and Lom, there is a lack of hospital staff. Ambulances rushing to regional hospitals can often be seen on the roads. The situation is similar in other parts of Bulgaria. However, the majority of the people are still resisting vaccinations.

My cousin is a doctor near Tarnovo, she's already in her 70's and still working. Yes, Bulgaria needs to get more people vaccinated, the doctors are suffering.

As I mentioned before, the political situation is contributing to the crisis, as the country has been continuously in-between elections for over a year.  There is an intensification of fake news and disinformation, including dozens of sham sites and social media accounts using the stolen personal information of medics [21]. Several investigations are underway, with no clear results so far. Political parties do not take decisive positions on vaccination at this crucial moment, and according to the doctors I spoke with, we can already talk about “a COVID-19 disaster.”

Instead of creating a unified campaign to explain the situation and why it is important for people to be vaccinated, politicians of all colors of the political spectrum are competing in their silence and dubious statements. With the November 14th parliamentary and presidential elections [22] approaching, no one doubts that these positions will remain the same, because of fear of losing voters. Low voter turnout is expected, fueled by apathy and frustration in general, and the COVID-19 crisis is further contributing to this situation.

“Each day Bulgaria loses the equivalent of one plane crash.” Bulgaria has the highest death rate in the world, yet its leaders don’t seem to want to do anything about it as the November elections draw closer.

Furthermore, one of the police unions in Bulgaria announced last month that it opposed the introduction of COVID-19 certificates. The police insist on an awareness campaign and a “grace period” while only 30 per cent of law enforcement officers have been vaccinated so far.

The use of the COVID-19 crisis for political dividends has led to more severe manifestations. In late October, interim Education Minister Nikolai Denkov was attacked [26] by supporters of the ultra-nationalist political party Vazrazhdane (Revival) [27], one of the main forces behind the protests against COVID-19 measures [15]. Fortunately, the minister was not seriously injured, but the case is indicative of tensions and how an unresolved crisis could lead to serious consequences.

Supporters of Vazrazhdane, whose leader is also a presidential candidate and is accused of having strong links to the Kremlin [28], sometimes use social discontent to gain visibility. For example, the attack on Minister Denkov took place during a protest by medics.

Another nationalist group [29] is also involved in provoking social tensions in the background of the COVID-19 crisis. At least one vaccination center was attacked in the past few months, while medics were threatened for doing their job.

Meanwhile, the black market price for a fake vaccination certificate or negative PCR test just hit 350 euros. In September, the going rate was between 200 to 300 euros, as reported [35] by Balkan Insight.

The whole situation is indicative of the social problems in Bulgaria which have been developing for years without receiving the necessary attention, not only from within but also from abroad. 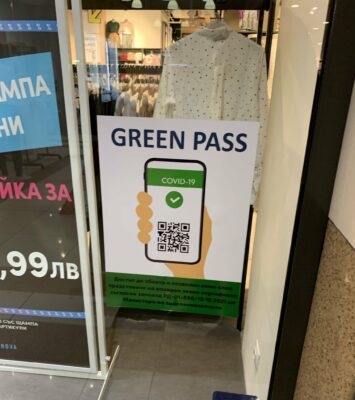 The lack of a quality political life also affects the general apathy and reluctance of people to comply with recommendations when they come from institutions and the government. The decline in confidence in leaders, politicians, and authorities, is currently reflected in the attitude to the COVID-19 crisis. As some analysts commented [41], some of the social links among people are falling apart because of the polar division on a number of topics, and this is one of the worst consequences of the crisis.

However, there are some good examples. Local mayors in municipalities are doing everything possible to encourage residents to get vaccinated and some are succeeding [42]. Organizations are trying to deliver food and essentials to the medics in the ICU wards; some do so completely voluntarily.

If there is any positive development, it will be not because of the situation in the country, but despite it, and thanks to efforts by dedicated individual citizens.