Observers suggested Japanese voters only care about a strong economy 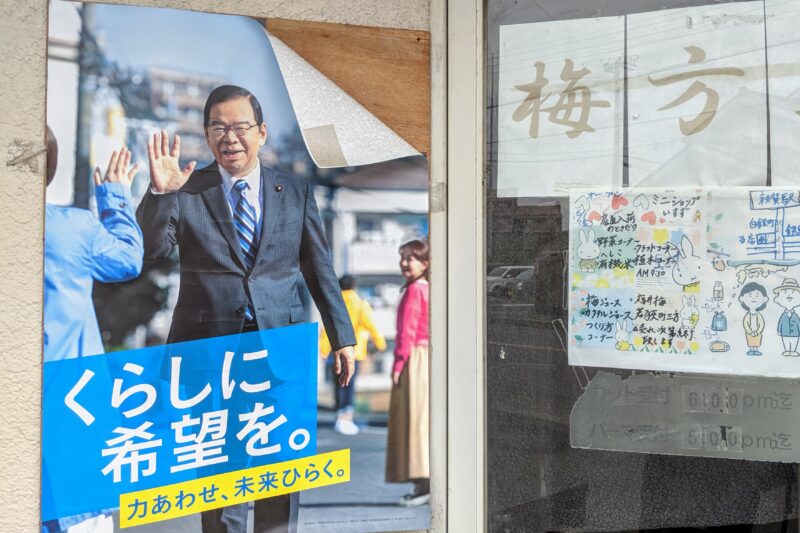 “Higher expectations for quality of life. Working together to unlock the future.” Japan Communist Party election poster from 2019. Photo by Nevin Thompson. Image license: CC BY 3.0

Despite a struggling government, stagnant wages, and a surge in COVID-19 cases over the summer, Japan's incumbent governing coalition, in power since September 2012, enjoyed a solid victory in the country's October 31 general election. Opposition parties, even after an all-out effort to coordinate campaign activities, once again failed to gain traction with voters.

The election saw all 465 seats in the House of Representatives, the lower house of Japan's bicameral parliament, called the National Diet, up for grabs. The ruling Liberal Democratic Party (LDP) surpassed the 233 seats needed to govern, securing 261 in total. The Komeito party, its longtime political partner, secured an additional 32 seats, providing the governing coalition with a comfortable majority.

The Constitutional Democratic Party (CDP), formed only since the last general election in 2017—yet still the largest opposition party in terms of number of seats held prior to the October 31 vote—did not do as well. Although it collaborated with other opposition parties so as not to compete for the same seats, the CDP only managed to win 96. Its main collaborator in the election, the Japan Communist Party (JCP), actually lost seats, leaving some election observers to suggest that the decision to avoid running competing candidates in some constituencies may have backfired.

Tokyo resident Derek Wesseman, who has worked as a parliamentary aide in Japan's Diet, observed that the CDP, unlike its election partner or even its political opponents, lacks local, on-the-ground connections with voters—but in the attempt to not split votes, the JCP, with its strong ground game, did not contest some seats it may have actually had a chance at winning.

Only 45 women, two fewer women than in the previous election, were elected in 2021, occupying less than 10 percent of the 465 seats in Japan's lower house.

In the lead-up to the election, some political observers predicted the result would be closer than normal. With unpopular prime minister Suga Yoshihide being replaced by Fumio Kishida in early October, the governing coalition appeared to be the underdog going into the election, frantically attempting to shore up votes in the face of a revitalized opposition.

However, some observers suggested that Japanese voters really only care about a strong economy, which the incumbent governing coalition based its campaign on. There is evidence that economic management rather than social issues such as marriage equality resonated with younger voters, who tended to vote for the incumbent Liberal Democratic Party.

Nojo Momoko, an activist who focuses on promoting voting among Japan's youth, referred to an election day exit poll that illustrated what issues mattered to voters of different age groups:

Here's the sad truth – it's easy to blame Japan's poor gender equality ranking on the LDP being out of touch, but truth is that there's very little interest in the issue across all age groups and genders, but particularly among elderly voters. In the end problem is societal https://t.co/6zWsTFw63o

As if to underline the perceived threat united opposition parties seemed to pose to the government, some politicians attempted a “red scare” tactic, warning of ruin if the Japan Communist Party were to get into government.

The most prominent, center-left opposition parties, meanwhile, cooperated during campaigning. For example, Yamamoto Taro, head of the small opposition party Reiwa Shinsengumi, campaigned on behalf of Ikeuchi Saori, a JCP candidate and LGTBQ+ activist who was seeking reelection in a Tokyo constituency:

Vote for this candidate and send a message of diversity! Take pride in sending a candidate like this to the Diet who will fight hard on your behalf! Let's help her get elected!

Despite Yamamoto's help on the campaign trail and perceived opposition party momentum, Ikeuchi was not re-elected. In fact, her party lost two seats, and its campaign partner, the CDP, also performed poorly—perhaps no surprise, given the low voter turnout of 55.79 percent.

There was some criticism that, with the number of polling locations being reduced over the past twenty years, it has become increasingly more difficult to vote in Japan. Since 2000, there are 7,000 fewer voting locations across the country, a decline of 13 percent. Others maintain, however, that the voting experience is easier overall.

Just as confusingly for voters, both the Constitutional Democratic Party and its rival Democratic Party use the same abbreviation in Japanese—but the reason that opposition parties in Japan just cannot seem to win an election may have much more to do with the churn and fragmentation they have been experiencing for the last four years.