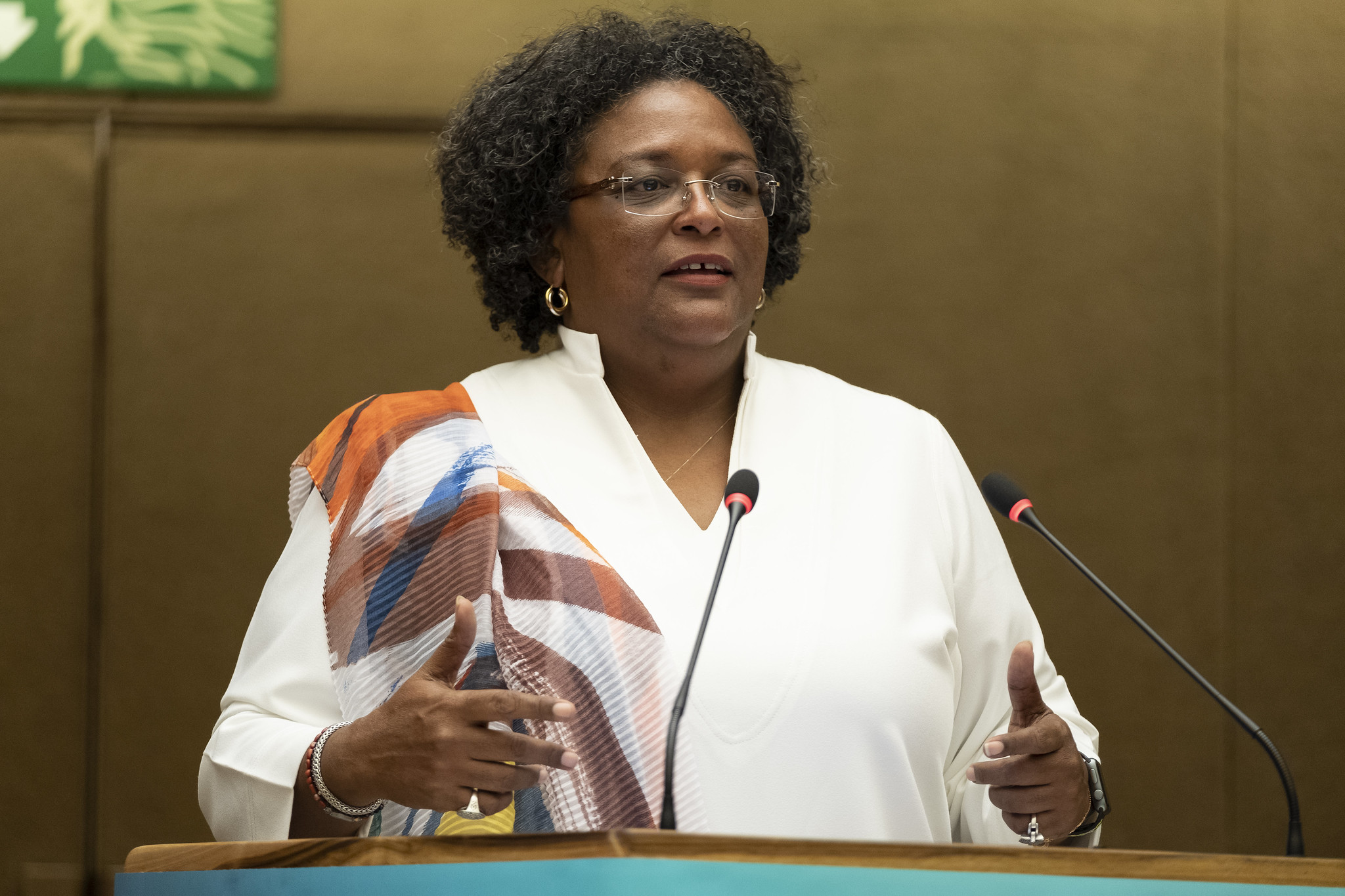 Prime Minister of Barbados Mia Mottley's representation of and advocacy for the Caribbean region at the 2020 United Nations Climate Change Conference (COP26) in Glasgow, Scotland, has captured the attention of world leaders and regional netizens alike.

Mottley's environmental star has been on the rise ever since her address at the United Nations’ Climate Event Summit on September 23, 2019, when she warned of mass migration if the climate crisis was not solved. Similarly, her speech at the opening of the #COP26 World Leaders Summit on November 1 made no attempt to sugar-coat the grim reality that Small Island Developing States (SIDS) like the Caribbean—which are on the frontline of the adverse effects of climate change despite contributing the least to global greenhouse gas emissions—are facing.

She called the failure to provide critical climate finance, which dropped by as much as 25 per cent in 2019, “immoral” and “unjust”:

The pandemic has taught us that national solutions to global problems do not work. We come to Glasgow with global ambition to save our people and to save our planet. But we now find three gaps. On mitigation, climate pledges or NDCs—without more, we will leave the world on a pathway to 2.7 degrees, and with more, we are still likely to get to 2 degrees.

Calling out China and Russia, two major contributors to greenhouse gases that were noticeably absent from the conference, Mottley continued:

Do some leaders in this world believe that they can survive and thrive on their own? Have they not learned from the pandemic? Can there be peace and prosperity if one third of the world literally prospers and the other two thirds of the world live under siege and face calamitous threats to our wellbeing? […]

The central banks of the wealthiest countries engaged in $25 trillion of quantitative easing in the last 13 years. […] Of that, $9 trillion was in the last 18 months to fight the pandemic. Had we used that $25 trillion to purchase bonds to finance the energy transition or the transition of how we eat or how we move ourselves in transport, we would now today be reaching that 1.5 degrees limit that is so vital to us. […] An annual increase in the SDRs of $500 billion a year for 20 years, put in a trust to finance the transition, is the real gap […] that we need to close, not the $50 billion being proposed for adaptation. And if $500 billion sounds big to you, guess what? It is just 2 percent of the $25 trillion.

The Barbadian prime minister later told CNN's Christiane Amanpour that countries like hers, which contribute less than a percentage point to global emissions, have been facing the impacts of the climate crisis for some time now: water supply problems, coral reef degradation, saltwater intrusion, and the influx of sargassum, not to mention flooding and hurricanes.

Those who need to make the decisions, she said, “are kicking can down the road—and they believe that they can because they're not seeing us—they see themselves”:

They're waiting for it to hit them and we really are hoping that […] they'll recognise that no one is safe until everyone is safe—and if the episode with vaccines hasn't shown us that, then we will never learn.

Her stance went over exceptionally well, with many regional netizens applauding her gumption and determination. Her example inspired some to wonder what it would be like if women ruled the world:

Global netizens, meanwhile, expressed a longing to have leaders of the same ilk:

Can we have Mia Mottley as our PM? Where are Australia’s inspiring leaders? What a speech. https://t.co/57sGTqX5B2

They weren't the only ones. Across the Caribbean archipelago, Mottley was leaving social media users star-struck:

Barbados, you have a prize

The truths she dares to speak with such courage

The power of her voice, and the keenness with which her counterparts listen

She is just Amazing ? so articulate and humble, you can only stop and listen to her. She commands the attention of the world press and leaders! Just goes to show what we lack in Trinidad […] we have leaders and opposition who hate our environment […] judging from their politics and policies.

While we care about our skyline, Barbados walks the talk. Ranking 5th in the world per capita in solar power use. Almost half the households use solar energy.

Barbados you must be proud, well said. 1.5 to stay alive #CaribbeanVoice

how does Barbados feel about PM Mia Mottley? Because the rest of the Caribbean feels as though y’all won the lottery in the PM dept. An authentic Caribbean woman who leads with courage and LOGIC.

From Jamaica, another added:

Mia Mottley, in just a few years, has solidified herself as a voice of authority on the world stage. In contrast, Jamaica has cowardly omitted to comment/vote on certain issues and has relegated itself to being but a shadow in the realm of diplomacy and international issues. https://t.co/aLf2WeNlmy

With all the fanfare, several opposition politicians, from Jamaica to the north of the island chain, to Trinidad and Tobago to the south, tried to use the goodwill Mottley was generating against their respective incumbent governments.

The Opposition People’s National Party says the inconsistencies between the words of Prime Minister Andrew Holness on the world stage and his actions at home are quite stark and should concern us all.https://t.co/QOgYaMcoYc

Still, the government made a point of defending itself, with one high-profile government councillor responding:

Meanwhile, Trinbagonians poked fun at the disparity between Mia Mottley's large audience and the sprinkling of attendees at the speech of their own prime minister, Keith Rowley, prompting Emir Crowne to quip:

Well if all yuh like Barbados so much, jus leave nah!

Despite the fact that the region is not a monolith, with every territory having its own specific culture and customs, the fact remains that Caribbean citizens are always quick to support one another and celebrate each other's successes, and to a region on the frontline of the climate crisis, Mia Mottley's message at COP26 definitely feels like something to rally around.