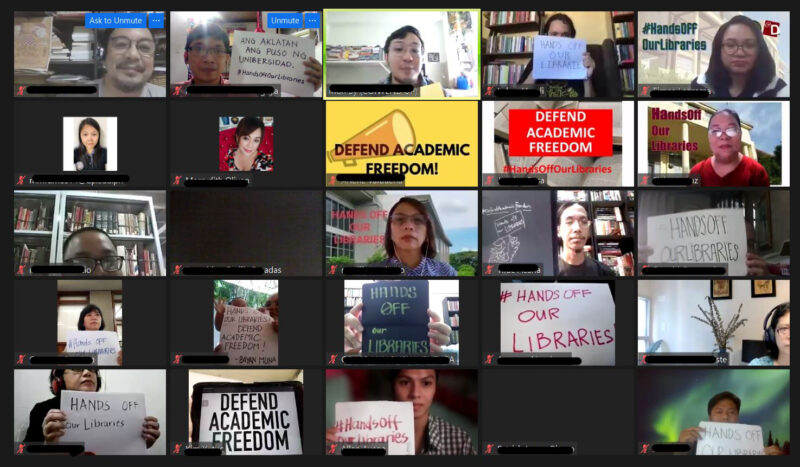 Filipino scholars, librarians, and students take a stand against the removal of ‘subversive’ books in university libraries. Source: Twitter

Libraries in the Philippines are under threat as the Duterte government's anti-communist task force, the NTF-ELCAC, have been removing books deemed “subversive” from library shelves. But such assaults on academic freedom, which drew comparisons to Nazi book burnings, have also sparked opposition from the academic community.

Last 1 September 2021, policemen and soldiers forced a librarian to remove “radical” books from the Kalinga State University library in Tabuk City, 458 kilometers north of the capital Manila. A week later, Isabela State University, in the northern Luzon province of Isabela, “voluntarily” turned over “communist” books in its library to the National Intelligence Coordinating Agency.

The Aklan State University on the central Philippine island of Panay followed by “surrendering” so-called “mentally unhealthy” books in its library after the Aklan Police Provincial Office reached out. Similarly, the University of Antique told the anti-communist task force in Panay Island that it has “no subversive books” in its libraries.

These intrusions into universities occur as the Duterte government intensifies its counterinsurgency war against the longest-running communist rebellion in the world. Students, faculty, and academic institutions have been targeted by vicious red-tagging or accusations of being “communist rebels” — a label that is often the prelude to arrests on trumped-up charges or, worse, extrajudicial killings.

Faculty, librarians, researchers, and other members of the academic community have banded together in several initiatives to push back against the Duterte administration’s extension of its “anti-communist” crusade into academic spaces.

The Academics Unite for Democracy and Human Rights (ADHR), an alliance of Filipino teachers, researchers, school administrators, and other education professionals, launched an online petition that had gathered 422 signatures as of this piece's publication.

Peace advocates under the Citizens’ Alliance for Just Peace (CAJP) say the Duterte government's book censorship will have a negative impact on potential future peace negotiations as a means to end the armed conflict:

In the guise of “protecting youth and students from being deceived and recruited by communists”, the NTF-ELCAC is actually stifling critical thought and open-minded study into the socio-economic roots of armed conflict. Just when this divided nation needs to grow the next generation of peace builders instead of warmongers, school administrations are lured into agreeing to outright censorship and thought control.

Ideas that change the world often gain ground through books and the spaces that house them. Books arguing that the sun is the center of our solar system, as in tomes by Copernicus and Galileo, or even for the very idea of a Filipino nation, as in the novels of Rizal, were once reviled as heretical and subversive. What prevailing order then, is now being “subverted” by the idea of respecting human rights, or the idea that another order is possible, nay, even necessary? 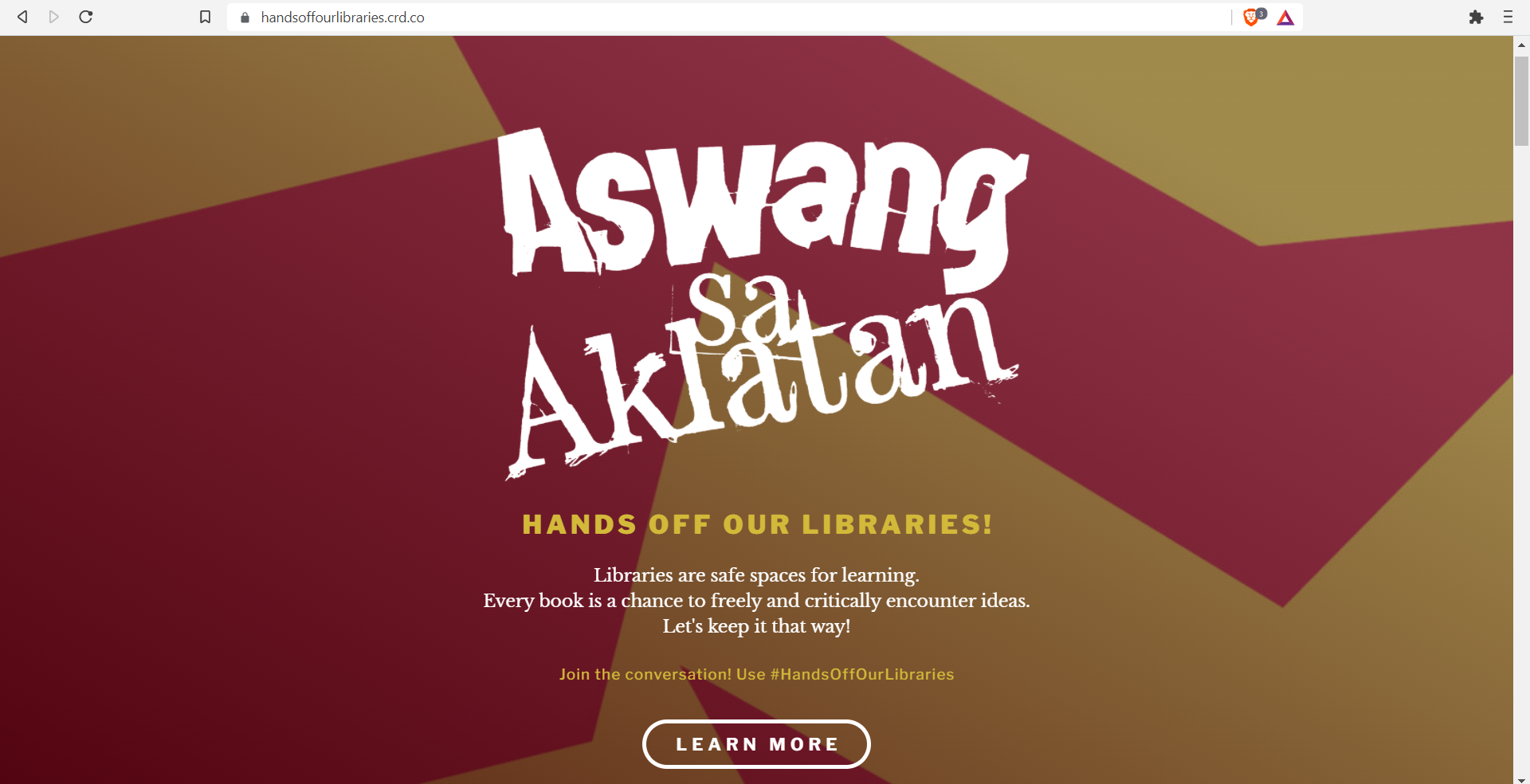 The ADHR also launched the “Aswang sa Aklatan” (Aswang in the Library) website on November 1, 2021. The aswang are feared Filipino mythical creatures that disguise themselves as ordinary townsfolk by day but feed on human flesh at night.

Speaking during the website's launch, Dean Mary Grace Golfo-Barcelona of the University of the Philippines Diliman School of Library and Information Studies (SLIS) points out the real aswang as those who attack libraries and the exchange of ideas:

The aswang that we should be afraid of are not the writings that advance free thinking and knowledge but those who repress the free information and intellectual freedom of everyone who enters the library.

The new website features updates on the #HandsOffOurLibraries campaign, including links to news articles covering the military's book censorship spree and a compilation of statements by different sectors on the issue. 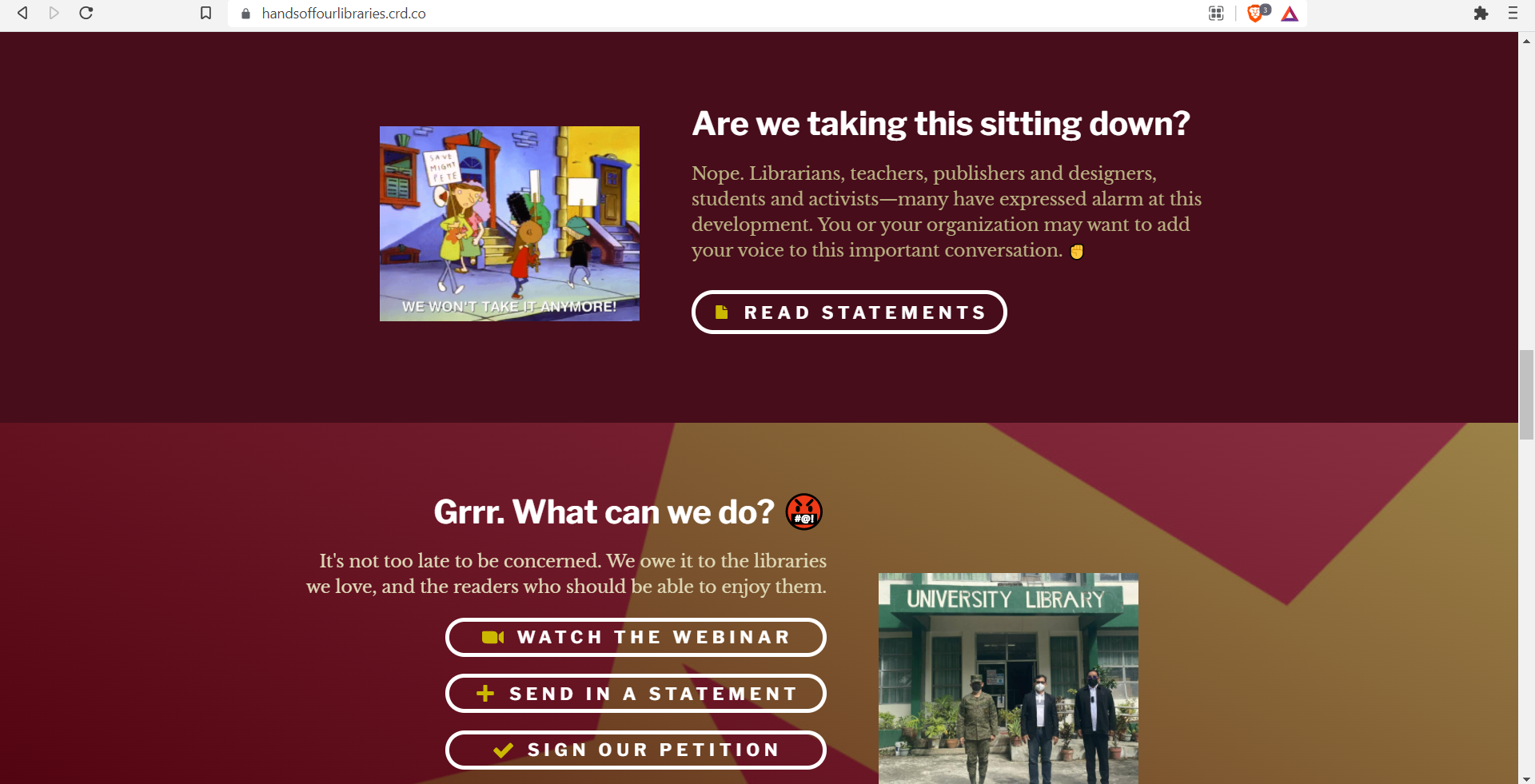 The website also hosts the online archive that provides “free and easily accessible resource of endangered books and materials,” including peace talk primers and radical books on the military's blacklist as well as references about Marcos’ dictatorship era.

Among the books that had been seized by the military are booklets of the peace agreements between the Philippine government and the National Democratic of the Philippines, including, among others, “The Comprehensive Agreement on Respect for Human Rights and International Humanitarian Law” (CARHIHL). Also confiscated were books by Jose Maria Sison, the founder of the Communist Party of the Philippines.

The online repository is dubbed “Multong Aklat” which in English means the “Spectre of Books” alluding to the opening line of Karl Marx and Friedrich Engels's Communist Manifesto.

Link to the “Multong Aklat: Digital Archive of Endangered Books” in the “Aswang sa Aklatan” website

The #HandsOffOurLibraries campaign continues to resonate as assaults on freedoms intensify, the latest episode being the Commission on Higher Education's (CHED) defense of the removal of “communist-terrorist” books from libraries as an “exercise of academic freedom.”

CHED’s office at the Cordillera Administrative Region issued a memo earlier calling on all universities and colleges to surrender so-called “subversive” books and materials to authorities.

Yet as the Duterte government seeks to tighten its control over the free exchange of ideas and critical thinking, more and more are joining the call to defend libraries and academic freedom.

LOOK: Librarians, professors, researchers, and students from the University of the Philippines and other SUCs take a stand against book censorship and attacks on academic freedom! #HandsOffOurLibraries!

Disclosure: The author is a member of the Academics Unite for Democracy and Human Rights.