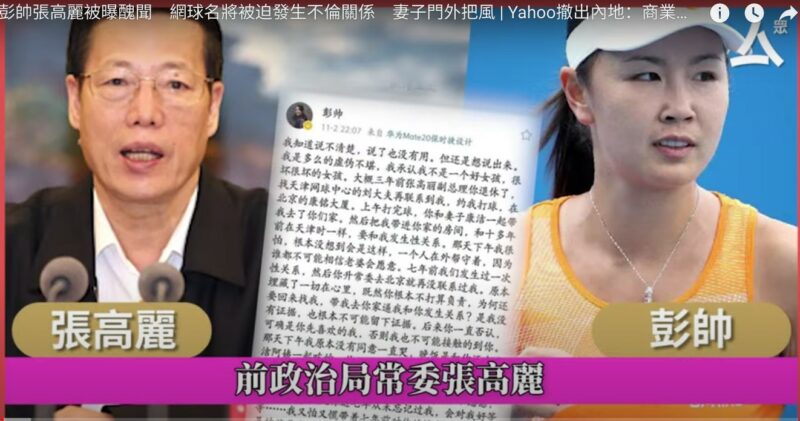 A screenshot from Hong Kong CitizenNews‘ video report on Youtube.

Chinese tennis star Peng Shuai made allegations that Zhang Gaoli, the former vice-premier of China, sexually assaulted her two times in the last ten years. The revelation triggered social media discussions, which were then removed from Chinese social media in under one hour as censors hastily blocked any content related to the sexual assaults.

Discussions quickly moved outside China's Great Firewall to Twitter, where Chinese netizens came up with two theories on Peng's exposé. Some see it as part of an internal power struggle within the Chinese Communist Party (CCP) while others believe that Peng's courage comes from the Chinese #MeToo movement.

The unverified allegations of sexual assault

The unverified testimony of 35-year-old professional tennis player Peng Shuai was reportedly published on her Weibo account on November 2 around 10 pm. It was removed in about 20 minutes, but her followers had already screenshotted the post and circulated it. Emily Feng from NPR posted Peng's testimony on Twitter:

Unverified post from Chinese tennis star Peng Shuai, taken down from Weibo within minutes, in which she claims (again unverified) that she was assaulted by former Vice premier Zhang Gaoli, before willingly becoming his mistress. Highest public #MeToo allegation in China pic.twitter.com/lPU8fQ9vbx

The testimony said that the first sexual assault had taken place more than ten years ago when Peng was in her twenties, and the most recent assault was about three years ago. She described being “terrified” and lured to the politician's home under false pretenses of playing tennis. Peng's wife was present when the assaults took place. After the first assault, she felt pressured to become his mistress.

Peng Shuai has remained silent since the post was uploaded to Weibo.

Zhang Gaoli, 75, was the vice-premier of China from 2013–2018, a member of the standing committee of the CCP from 2012–2017, and the party secretary of Tianjin from 2007–2012. While there have been many sex-related scandals involving government and party officials, Zhang is the highest-ranking official to be implicated.

Although the details of the allegation can’t be verified, many Chinese netizens view it as authentic, as pointed out by Chinese human rights activist Yaqiu Wang:

Peng's account of events can't be verified. Even whether it is from her is not verified. But reading the essay, one can feel the authenticity, because we are all familiar with this dynamic involving unaccountable power, secrecy, abuse, and exploitation. https://t.co/hdZpRlsiPr

As expected, the incident has triggered some of the most rigorous censorship seen in recent years. All online discussions on major social media platforms about Peng Shuai’s allegations were deleted in China, including posts that used homonyms or coded words to replace the involved parties’ names. William Yang, a journalist, and Alexander Boyd, a former NGO volunteer, shared their observations on the rigorous censorship on Weibo:

Just tried to leave a “hi” under Chinese tennis star Peng Shuai’s Weibo account and this is what pops up: “Because the content contains messages violating Weibo’s community rules, it can not be processed.” #China’s censorship in play. pic.twitter.com/nTLOeIvZN1

Some netizens are debating whether this event is being used as a tool in the CPP's internal power struggle. Cai Xia, a retired professor of the CCP Central Party School who resides in the US, believes that the Chinese censor intentionally kept Peng’s post online for more than 20 minutes, just enough time for the scandal to spread:

The CCP has an extremely strict censorship practice. The names of former standing committee members are often flagged as sensitive terms. Exposés that involve real names, could trigger an automatic blockage and could not be published in most circumstances. But Peng Shuai’s Weibo post survived for 20 minutes. This 20-minute time is quite magical. This signals an intention to let the bullet fly… fly for just a moment.

20 minutes was just enough time for the scandal to spread, then the censors stepped in… This is a quite typical censorship practice when cracking down on opponents, they have to contain the damage to prevent undermining the CCP dictatorship.

Sumerian, another mainland Chinese dissident based in the US, developed a more elaborate theory:

Obviously this is a sex scandal under the instruction of Xi. Or else the Weibo post could not survive for that long. Now even Wikipedia has updated the related entries. The Sixth Plenary Session of the 18th CPC Central Committee will start in just a few days. Xi will present his plan for the 20th Party Congress in 2022 so that he will be re-elected again and fulfil his dream of being the Great Chinese Emperor. That’s why he has to release some negative news targeting those who are not loyal to him as an act to “Kill the chicken to scare the monkeys.” His opponents are now in chaos and they will have to surrender to their fate.

As a result of the scandal, the stock prices of Xinyin Solar Holdings and its related subsidiaries, which are controlled by Zhang Gaoli’s daughter-in-law, dropped nearly nine percent on November 3.

“This is a Me Too moment”

However, many have rejected the conspiracy theory. Exiled Chinese dissident Wen Yunchao is one of those who voiced the need to stand by Peng and take her account as it is:

Many have interpreted the incident as a power struggle. But in any power struggle, the power between the two parties are more or less equal. When one side is powerless, we should not take it as a power struggle or we have downplayed the harm that the powerful had inflicted upon the weak, causing more pain to the victim. While the truth is still unclear, we have to stand with the eggs (the powerless).

In fact, many Chinese feminists believe that Peng’s exposé is a result of the #MeToo movement. Lu Ping, a prominent mainland Chinese feminist, wrote a series of tweets about the significance of Peng’s exposé. A blogger, Sara Liao, compiled Ping’s comments and translated them into English here.

I will comment on the Peng Shuai incident in a series of tweets. 1. The Peng Shuai’s exposé is crucial. It reveals the real life of top Chinese leaders and lets people have a glimpse of their hypocrisy, corrupt lifestyles, excessive power abuse, and fear underneath their moralistic masks. We used to imagine the truthful side of powerful people, now it is publicly unveiled by a real person.

People know that the exposé is authentic. They [the top leaders] have always been rotten and corrupt. They have always exploited women but have managed to do that in the dark. That’s why it is so important to “voice it out.” This is a #MeToo moment, but much more than that. But I give the credit to the #MeToo movement, it is so powerful. It took us three years to reach here…