What can we expect from Russia at COP26?

Globally, Russia has long been seen as a climate pariah 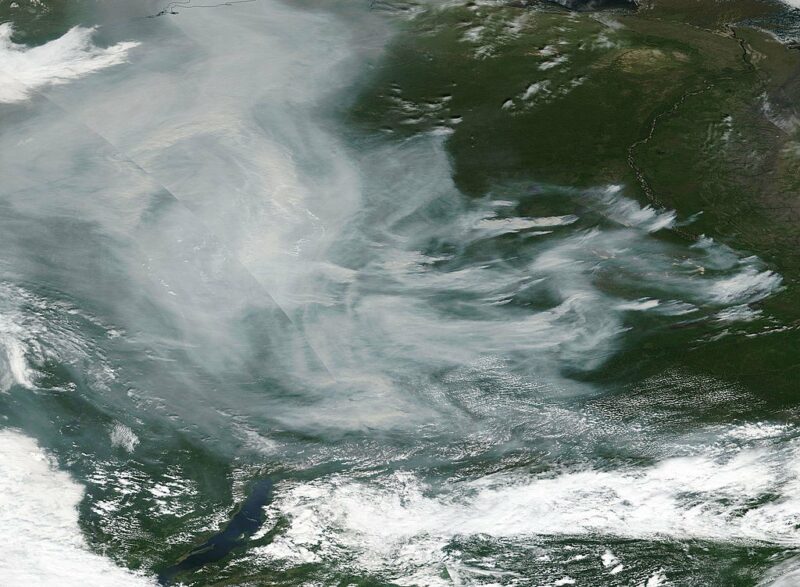 This article by Natalie Sauer originally appeared on Open Democracy on October 28, 2021. It is republished as part of a content-sharing partnership and has been edited to fit the GV style.

Russia has been seen as a climate pariah by the international community for some years. It was one of the last countries to ratify the 2015 Paris Agreement – not until September 2019, at the UN’s Climate Action Summit.

At the time, few would have expected to see the ambitious declarations made by Russia this year.

In April, ​​Vladimir Putin asked his cabinet to produce a plan to cut carbon emissions below the level of the EU by 2050. In July, the Russian president signed legislation that requires the country’s largest companies to report their greenhouse gas emissions — a move hailed as the first step towards carbon regulation.

In September, a two-year decarbonisation strategy budget was launched. Finally, two weeks ago, Putin stunned observers by committing Russia to a target of net zero by 2060 — the same as China and, most recently, Saudi Arabia.

“This target means we can now head to Glasgow without shame,” Alexey Kokorin, climate lead at WWF Russia, told the Russian business daily Kommersant. Indeed, some Russian commentators have expressed surprise at Putin’s change in rhetoric. The Russian president once used to laugh off climate change as an opportunity to boost crop yields, but now acknowledges the “grave challenges” it poses to the country.

“Climate change denial is over,” opined prominent foreign policy commentator Dmitry Trenin, who described the 2060 target as a sign of a “sea change” in the Kremlin’s thinking.

Russia is hardly on the cusp of an ecological revolution, but could the world’s fourth-largest greenhouse gas emitter be finally falling in line with global decarbonisation trends? And might this herald a change in attitude at COP26?

Russia could aim to slash its greenhouse gas emissions by 79 percent from current levels by 2050, according to Russian business media Kommersant, which has seen the draft of the new net-zero strategy.

Under the strategy’s “intense scenario” of Russian climate change policy, the country’s emissions are set to peak by 2030, rising only by 0.6 percent. By comparison, Russia’s previous plan would have seen emissions increase through 2050 and not drop to net zero for another 80 years, until 2100.

But expert opinion is cautious about how far Russia’s green turn really goes.

Bobo Lo, an associate research fellow at the French Institute of International Relations (IFRI), says that “Fossil fuels are Russia’s great comparative advantage, and it is unthinkable to me that it would voluntarily give this up.” “Saying is one thing, doing is quite another!” he adds.

Lo pointed out that Russia’s 2035 Energy Strategy currently forecasts a 50 percent increase in gas production to 2035, and the 2035 Coal Production Strategy also envisages a surge in coal production.

“How is any of this compatible with a net-zero commitment? It isn’t, but then again 2060 is a long way away,” Lo says. “By that time, these commitments will have been overtaken by events.”

Russian energy minister Nikolay Shulginov told the Russian Energy Week forum two weeks ago that the 2060 net-zero target meant that the country would have to diversify its energy mix and revise the 2035 Energy Strategy.

But rather than a genuine ecological transition, Lo reads Russia’s new commitment as an attempt to “be seen as an upstanding member of the international community”, noting that it’s important for the Russian leadership not to be “an outlier at a time when there is broad consensus on the threat global warming poses”.

“It’s easy to pluck figures out of the air and pretend they will be realised,” he says.

What is involved in Russia’s 2060 net-zero target?

Under draft plans, Russia’s electricity power generation would shift from coal-based power plants to gas turbines, nuclear, hydroelectric and renewable power facilities. Oil and gas exports are due to fall by 2% a year in real terms from 2030. More contentiously, the Russian government has also set out to raise the carbon absorption of ecosystems by 220% via forest conservation methods  – a task that some experts doubt is feasible in light of the country’s increasing wildfire problem.

Maria Pastukhova, a senior policy adviser at European think tank E3G, told openDemocracy that a genuine shift is happening in Russia’s climate policy. “No, it is not a mere facade and will definitely affect the existing energy strategy,” she says.

Pastukhova predicts that Russia will shift towards nuclear and large-scale hydroelectric energy, with a greater emphasis on energy efficiency and an accelerated transition from coal to gas in the power sectors.

However, she advises caution on one point: Russia’s 2060 pledge does not account for exported emissions – and the country’s fossil fuel industry is currently eyeing the Asian market. At the very event where Putin unveiled the net-zero target, the Russian energy ministry also agreed to boost exports of coking coal to India by up to 40 million tonnes per year.

Vasily Yablokov, head of energy at Greenpeace Russia, agreed that much work lies ahead to adapt Russia’s strategies to climate goals. “The risk remains that Russia’s fossil fuel industry lobby will not give up state support overnight or even in the medium term,” he says.

“They will argue, among other things, that [cutting state support] will lead to increased social problems and even a failure to meet the UN’s sustainable development goals, where, for example, goal eight aims to promote economic growth,” Yablokov notes.

At best, Russia has tended to keep a low profile at climate negotiations. At worst, it has teamed up with other petrostates to obstruct climate action.

At UN climate talks only three years ago, Russia allied with Saudi Arabia, Kuwait and the US to tone down references to the IPCC’s landmark 1.5°C report, which suggested that limiting temperature rises to 1.5°C could help avoid some of the worst effects of climate change.

The country has also systematically dragged its feet to endorse climate treaties, from the 1997 Kyoto Protocol (ratified in 2004) to the 2015 Paris Agreement (ratified in 2019).

Rarer instances when Russia has taken a progressive stance have required incentives – such as the prospect of burnishing its ‘great power’ status or embarrassing a foe. For example, it made ratification of the Kyoto Protocol conditional on Russia’s membership of the World Trade Organization. Likewise, at an Arctic Council meeting in 2019, Russia joined other states in recognising climate change as a threat to the region – while the Trump White House refused to do so.

COP26 is billed as the most important COP since Paris in 2015, with the rules of the Paris Agreement – the ‘Paris rulebook’, for short – and climate finance for developing countries among the most pressing negotiations.

For some, Putin’s recent announcement that he would not attend the summit already suggests that Russia’s green metamorphosis is lacking.

“You can read [Putin’s absence] in two ways,” IFRI’s Lo says. “One: the Russian delegation announces some radical initiative which Putin, being absent, feels no obligation to stick to. Two: they go with the 2060 goal, which will either be unenforceable and/or irrelevant. Either way, the Russian government is completely committed to maximising its comparative advantages in fossil fuels.”

Pashtukhova, from E3G, begs to differ. She believes Putin’s absence is partly because President Xi Jinping, the Chinese leader, is not attending: “I’m certain, had [Xi] attended, Putin would have been there as well.”

However, the analyst also sees the president’s non-attendance as part of a Kremlin strategy to pressure the West into lifting sanctions that are damaging the green transition and the Russian economy. Russia’s majority state-owned gas company Gazprom, for example, is still under sanctions over Russia’s annexation of Crimea and support for the war in Ukraine.

Indeed, Russian climate envoy Ruslan Edelgeriyev has signalled that the issue of sanctions is paramount. Pastukhova points out that the Russian state bank VEB is responsible for drafting the country’s green taxonomy (a classification system for sustainable development) and is currently under sanctions.

“No discussion about [Russia’s] green finance can avoid the need to lift sanctions – at least on the ‘green’ part of finance,” she says.

It’s the same for the Global Methane Pledge set to be launched at Glasgow by the EU and U.S. Although Russia is one of the world’s largest methane emitters – not least because of its creaking pipeline infrastructure – it has already indicated that it will not join the pledge until its gas and oil industry can access technology and finance that it is currently barred from.

As for the Paris rulebook, the subject of deadlines for climate pledge updates is crucial. Vulnerable countries are pushing for goals to be revised every five years from 2031, arguing that shorter time spans encourage greater ambition. However, at the last COP, in Madrid in 2019, Russia argued for a ten-year timeframe because it better suited its national planning.

Delegates will also discuss the UN’s carbon offset scheme, the so-called Sustainable Development Mechanism. This allows countries to fund greenhouse gas emissions-reducing projects in other countries and then claim the saved emissions as part of their own efforts to honour climate pledges.

Here, Russia is expected to attempt to monetise its vast forests. In a submission in October, the country appears to be pushing to extend the crediting periods for forestry activities, in a bid to attract private investment in forest management. It is also pushing for lax carbon accounting rules.

Finally, according to Yablokov and Pastukhova, it is unlikely that Russia will deliver on climate finance for developing countries. COP26 president Alok Sharma has described climate finance as “an absolute priority”. He hopes to make developed countries abide by their 2009 pledge to give vulnerable countries 100 billion US dollars a year to help them adapt to the impacts of a warming planet.

But referring to the West’s failed promises – such as climate finance – Russian climate envoy Ruslan Edelgeriyev recently stressed that “Russia will not take unequal steps.”