Hate crimes are not defined within Bulgaria's Criminal Code 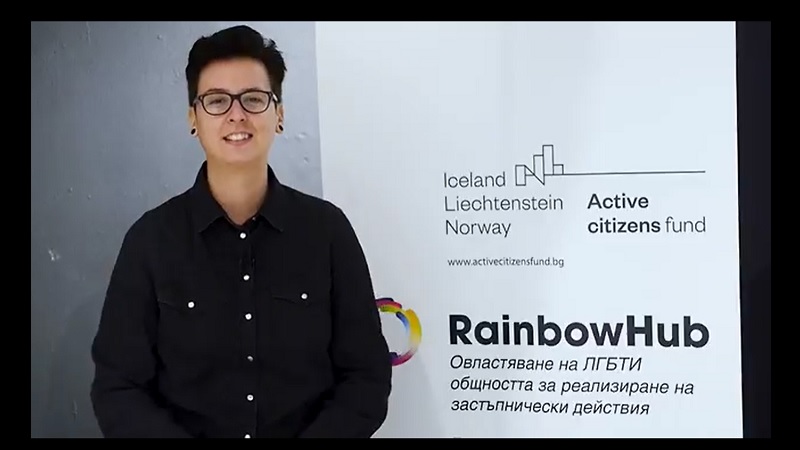 Gloria Filipova from the Rainbow Hub was in the face on Saturday, October 30, 2021. Photo: screenshot from a Facebook video by the Rainbow Hub, used with permission.

Our office and LGBTI community center in #Sofia – Rainbow Hub, was attacked tonight during a #trans community gathering. The leader of the attack Boyan Rasate is well known for his LGBTI-phobic actions and statements, and is currently running for President in #Bulgaria (read ⬇️) pic.twitter.com/StwibomFGL

According to Nova.bg TV news, the police has started an investigation on “hooliganism,” based on the testimony of activist Gloria Filipova, who underwent medical examination right after:

I am physically fine. The wounds are minimal. Psychically I am very stressed. We had an event and around  17:30 hrs someone knocked on the door. A girl went to open. I also went to see who it is. A group headed by Boyan Rasate entered. I started shouting, telling them they aren't allowed to come inside, and the he hit me. They began to ransack everything around the place. It all lasted for several minutes. I called the police over the phone.

Other eyewitnesses confirmed that suspected leader of the attack Boyan Rasate hit Filipova with a fist in the face. According to the Sofia Globe, Filipova added:

In the end, Boyan Rasate and another man remained. I had said that they had done their job and could leave, but he replied that he had not finished yet and took out a knife and cut the tires of a scooter that was here. The knife was not used against us, but there was a weapon.

Rasate stated for Nova.bg on Sunday morning that the police has not sought him by that time.

Four political parties as well as number of individual politicians condemned the attack, according to Radio Free Europe in Bulgarian.

Center-right European Parliament Member Radan Kanev stated in a Facebook post that the event, while “outrageous and disturbing,” was not unexpected, because “violence based on hatred of different sexualities, specifically gay people, is not a new problem in Bulgaria. On the contrary, it is a deepening problem that has already taken innocent victims.”

He also reiterated the its high time that crimes motivated by hatred of different sexualities be qualified as felonies within the Criminal Code.

#Neonazi attack on #RainbowHub #Sofia is as outrageous & alarming as it is expected. As expected, b/c violence based on hatred of different sexualities, specifically gay people, is not a new problem in #Bulgaria. On the contrary, it is a deepening problem, @Europarl_EN @hrw #LGBT pic.twitter.com/aweENn9Dlb

Monitor.bg reported that center-left political party We Continue the Change issued a communique via Facebook claiming that the attackers from “an organization of a paramilitary type” were armed, and demanded the revoking of the parliamentary immunity of their chief and swift action by the public prosecutor.

Bilitis Foundation, the founder of the Rainbow Hub, stated on Twitter that the attack comes just 10 days after a petition with All Out of more than 8,000 signatures was filed at the Ministry of Justice demanding the introduction of anti-LGBTI hate crimes into the Criminal Code. Hate crimes based on the victim's sexual orientation and gender identity are not currently recognized as a special category in Bulgaria.

On October 26, the Bulgarian Constitutional Court ruled that the ratification of the Istanbul Convention, an international human rights treaty against violence against women and domestic violence would be anti-constitutional. Balkan Insight reported that activists in Bulgaria have criticized the ruling, which said the word “gender” can only indicate biological sex.

In Bulgaria, the English term gender, in its direct transliteration (джендър), is being used as a slur, to belittle sexual minorities and gender nonconforming people. Often, the term is also used to denigrate feminists and human rights defenders.

A number of the people on Twitter calling for solidarity with Rainbow Hub also noted that one can express it through donations that will be used to rebuild and reequip the premises.

Yesterday evening an LGBTI Community Centre in Sofia was attacked by the Bulgarian National Union, with one person injured. If you’d like to support the Centre in rebuilding and continuing its important work, here’s how to donate pic.twitter.com/uaaM74YFUd