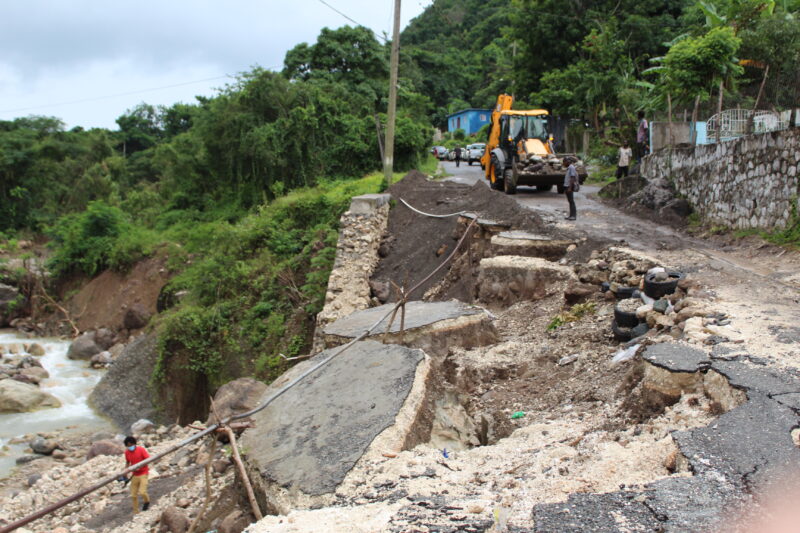 Weise Road in the Bull Bay area of Jamaica, in October 2020 after heavy rains caused the nearby Chalky River to overflow, causing the road to break away. Photo credit: The Ministry of Housing, Urban Renewal, Environment and Climate Change, used with permission.

The term “Loss and Damage” speaks for itself, but in the context of the climate crisis, it embraces a wide range [1] of issues that are particularly concerning for Small Island Developing States (SIDS), which often find themselves on the frontline of climate change impacts.

The Warsaw International Mechanism [2] addressing Loss and Damage was set up in 2013, and is included in the historic 2015 Paris Agreement [3]. However, many developing countries—including the Alliance of Small Island States [4] (AOSIS), to which the Caribbean belongs—feel the issue should have a much higher profile at the UNFCC Climate Change Conference (COP26 [5]) in Glasgow, Scotland, which runs from October 31 to November 12.

Before she left for Glasgow, I had a Zoom call with Le-Anne Roper, the senior technical officer for adaptation in the climate change division of Jamaica’s Ministry of Housing, Urban Renewal, Environment and Climate Change [6]—who will also serve as AOSIS’ lead negotiator on Loss and Damage at the conference—to figure out how smaller developing nations can push for a stronger focus on the Loss and Damage they have been experiencing almost weekly. 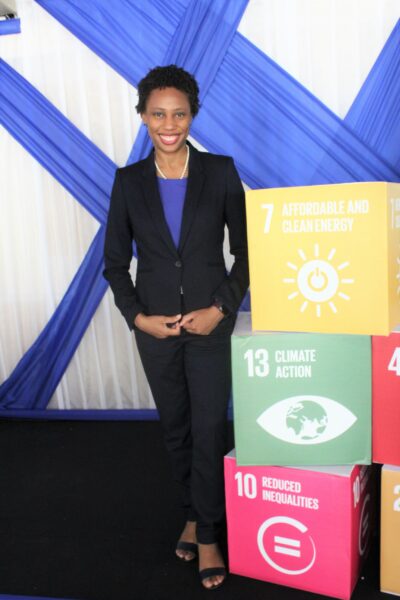 Emma Lewis (EL): What does Loss and Damage mean in climate change negotiations, and why is it so important for Jamaica and other Caribbean nations?

Le-Anne Roper (LAR): In the formal United Nations process there is not a standard definition [but] what has been agreed is that there are certainly some limits to where adaptation is possible. Adaptation [7] involves reducing or reversing the harmful impacts of climate change—beyond those limits, Loss and Damage becomes a reality.

The latest report [8] by the Intergovernmental Panel on Climate Change (IPCC) Working Group of scientists (August 2021) unequivocally stated that the 1.1 degree increase in global warming since the industrial revolution is due to human activities. We are adjusting to a climate that is changing at a faster pace [9]than we are. This is where Loss and Damage becomes more extreme, and more of a reality.

We can see that those limits are being reached and passed. We are already experiencing Loss and Damage in the Caribbean, forcing people to leave their homes due to floods, landslides and so on.

There are two types of events that we would call Loss and Damage. Both are contributing to the problem. There are the extreme events [10], which are easy to identify: in the Caribbean, hurricanes [11] and floods, for example. Then, there are the slow onset events caused by climate change, which happen gradually—for example, sea level rise.

What we are seeing now is the multiplier effect of these types of happenings. The slow-onset events are making extreme events worse. For example, the impact of a storm on our coastlines is worsened by the fact that sea levels are rising.

The economic losses [12] are easy enough to calculate. What we are trying to do now is to calculate non-economic losses [like] loss of life, ill health, injuries caused by disasters, vector-borne diseases, even the loss of indigenous knowledge, cultural heritage, loss of benefits from an ecosystem that is destroyed.

One example is in St. Margaret’s Bay [13], where people have abandoned their homes, because [14] the sea has reclaimed them.

LAR: The nature of climate change is such that vulnerable developing countries like ours are always disproportionately affected. […] Nevertheless, developed countries are also suffering, [as with] the wildfires [15] in the United States and Canada, and floods in Europe—but those countries have the ability to respond. For us on the frontline, it is beyond our capacity to respond sufficiently to protect our people.

This is an issue that is not of our doing.

EL: What will Jamaica's position on Loss and Damage be in the upcoming COP26 and what outcomes are you hoping for?

LAR: There is a need for a focused push for Loss and Damage to be treated with the kind of importance that it demands. In terms of finance, the mantra ‘it takes cash to care’ really does apply.

We are pushing for increased, amplified financing in addition to previous commitments made on finance. The $100 billion goal [16] previously agreed on did not take Loss and Damage into account.

Discussions are beginning around a new finance goal [and] we must ensure that Loss and Damage is […] the third element in the conversation, in addition to Mitigation and Adaptation [17]. In the past, it was merged into Adaptation, but we are pushing for it to stand on its own, separately, in the negotiations at COP26.

We need the Santiago Network [18] [established in 2019] on Loss and Damage to be fully operating. This will bring together technical assistance from international and regional organisations, bodies, networks and individual experts, benefiting civil society [19] and communities on the ground. 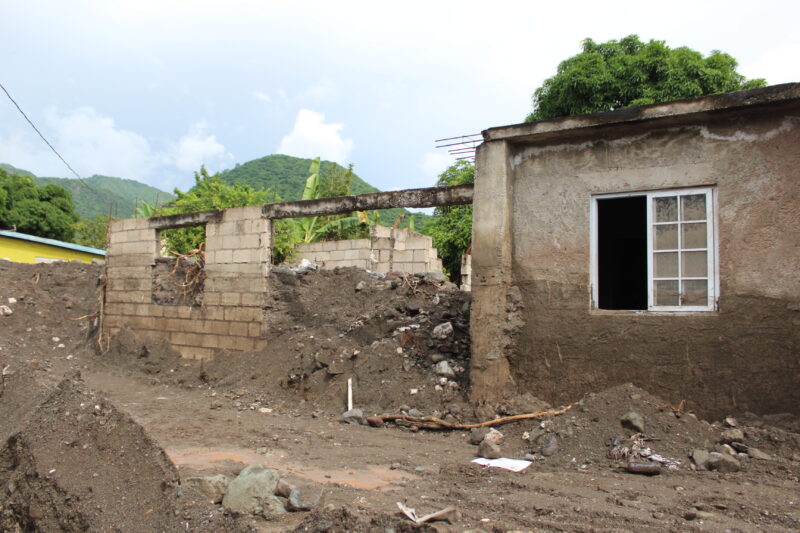 EL: How has the COVID-19 [20] pandemic affected climate change negotiations?

LAR: The meetings were all virtual, and not all decisions can be made virtually. We had to delay formal negotiations. There will be less participation [21] from developing countries at COP26, but AOSIS will do its best to ensure that even those unable to attend physically will have their views taken on board. […] Ideally, we would want to have everyone physically at the table, but we will make the best of a bad situation.

EL: Many Jamaican communities are increasingly vulnerable to the impacts of climate change. What can they do to protect their environment and livelihoods?

LAR: First, and most important, is to seek information. Communities need to become more knowledgeable. Once citizens understand the potential impact and risks of climate change, it puts them in a better position to assess their own risk and work out ways to reduce it. Without knowledge, you can be doing things that put you in an even worse position.

Partnering with organisations and governments on ways to adapt to climate change is important, contributing traditional [and experiential] knowledge. Unfortunately, since most of us live along [rapidly eroding] coastlines, communities also need to grasp the breadth of the impact of climate change. They will need to find alternative livelihoods, or supplementary ways of earning a living.

EL: Does this mean that people also have to change their mindset, perhaps move away from traditional ways of doing things?

LAR: For sure. The old ways we are used to need to be revisited. Indigenous knowledge is very important, but we need to recognise that some practices are no longer going to be viable.

EL: Finally, is Loss and Damage at COP26 all about getting more funding? Is money the issue and if so, where does the insurance industry fit in?

LAR: Insurance usually applies after an event has occurred—there’s a trigger for payout if certain criteria are met. The Caribbean Catastrophe Risk Insurance Facility (CCRIF) [22] is one such insurance [through which] regional governments buy premiums for their countries. It covers earthquakes, hurricanes, and excess rainfall—but insurance is just one aspect and mustn’t be seen as a saviour. There is a significant amount of financing required before something happens, so that the effect of it is less.

I want to stress that it’s important for high emitting, major polluters to commit to reducing greenhouse gas emissions. That is what is driving the extremes of climate change. Meanwhile, we have to adapt. We must recognise that Loss and Damage is now a reality for us. The changes are already with us—we are committed to living with these extremes now.

We must be prepared. Our way of life will have to evolve. This is not just a ‘government thing.’ Everyone must come on board and play a role.