'The guerrillas killed my husband, and the soldiers killed my two kids' 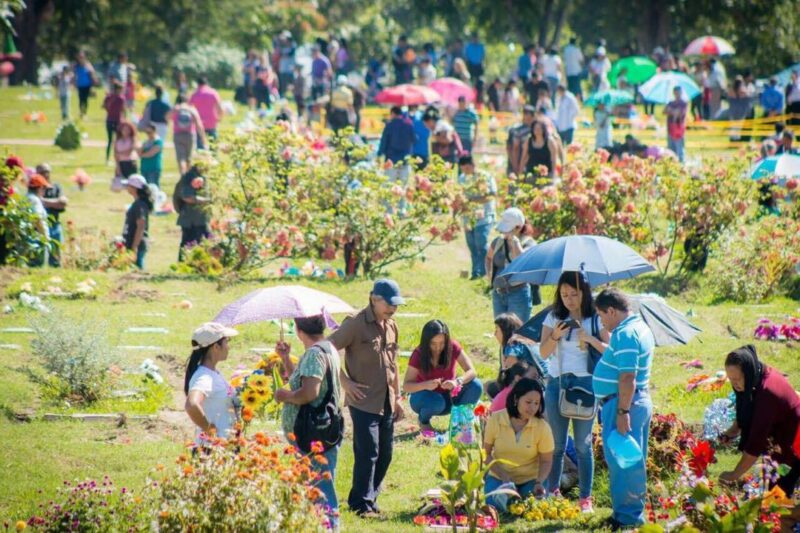 El Salvador is full of marvelous customs and traditions. These celebrations involve joyful family gatherings, religious activities, live music, traditional foods, and dancing until late into the night. Many come from Christian traditions and others have their roots in pre-colonial times.

People of all ages look forward to these holidays. For instance, kids look forward to Christmas so they can get presents, not go to school, set off small fireworks all month, and eat traditional foods, such as panes con pollo. Religious Roman Catholic people look forward to Easter's Holy Week to strengthen their faith. Others just look forward to holidays to relax at the beaches and have barbecues with family or friends.

Yet, there is one Salvadoran celebration that not many look forward to, me included: The “Day of the Dead” or All Souls Day, when like in many other countries with Christian backgrounds, families visit graveyards to commemorate their deceased loved ones.

The Day of the Dead celebrations originated in Mexico centuries ago. From October 31st to November 2nd, family members go to cemeteries where their loved ones are buried, clean their graves, and decorate with flowers. All Souls Day is a Roman Catholic celebration that dates back to the ninth century during which people pray for the souls of those who passed away. Both traditions pay respect to those who have died but the forms of commemoration are different.

Whatever the name of the holiday, for many Salvadorans, it brings back painful memories of relatives or friends who were killed or disappeared during El Salvador's Civil War in the 1980s or the unstable decades that followed. About 80,000 people were killed during the war, which was heavily funded by the United States in the context of the Cold War, and many more were disappeared or forcibly displaced in a country with fewer than five million people at the time.

To this day, these deaths are still fresh in the minds of those who lost relatives or friends, especially because of the impunity enjoyed by the majority of those who were guilty of atrocities during and after the civil war.

My family lived in a small rural town, in the heart of the conflict, in eastern El Salvador. I saw first-hand the atrocities committed by both the army and the guerillas. In 1982, one of my uncles disappeared. I was a child back then, and every time a body was found, we had to go and see if he resembled our uncle. From the age of five until I was nine years old, in 1986, I had seen too many dead bodies. In 1989, I moved to the United States.

I didn't lose any closer family members during the war, but that was not the case for tens of thousands of families who lost fathers, mothers, sisters, or brothers. Many people who survived the civil war now visit cemeteries and are painfully reminded of this dark time.

Maria Ofelia Barahona lost her husband and two kids. To this date, she is still grieving their loss and brews resentment. Every November, she relives bitter memories. She told me:

The guerrillas killed my husband, and the soldiers killed my two kids. It is not fair that they got killed just for living in a warzone,” said Ofelia.

Even though November 2nd is a distressing date for her, she visits the cemetery, cleans the graves, and brings flowers every year, just like thousands of other Salvadorans.

Día de los Difuntos from El Salvador ??
People visit the cemeteries to bring flowers to their loved ones, this is known as “enflorar.” Some people also bring musicians so that they sing to them as a way to remember the songs that they liked. pic.twitter.com/QcrHyL8INu

After the civil war ended, things didn't improve in El Salvador; if anything, they got worse in the form of a low-intensity conflict. The war left most of Salvadoran society in poverty, with broken family ties, weak political institutions, and no way out.

Since 1992, chronic violence in El Salvador increased—more Salvadorans have died in violent conditions after the civil war ended than during the armed conflict. Crime reached its peak in 2015. That year, an average of 18 people were killed per day or 104 per 100,000 inhabitants, making El Salvador one of the deadliest countries in the world.

On November 2nd, families who have lost loved ones to crime and gang wars visit cemeteries. For many, it is a painful reminder of perpetual violence in El Salvador.

Orlando Jimenes, or Don Orlando as he is affectionally called, knows this pain well. Since 2011, he has lost five grandkids to gang violence.

I am not going to make excuses for them. They chose that life and paid the ultimate price. However, that does not make it any easier, they were my grandkids, and I still love them,” expressed Mr. Jimenes.

However, not everyone feels sad or angry during this holiday. Many Salvadorans look forward to paying respect to their friends and family who passed away. Some even go as far as bringing a mariachi band to cemeteries.

I have been fortunate enough not to have lost a loved one to violence, but seeing the sadness and pain that many people endure during this day makes me grieve with them. El Salvador is still in mourning for those who died in brutal conditions.