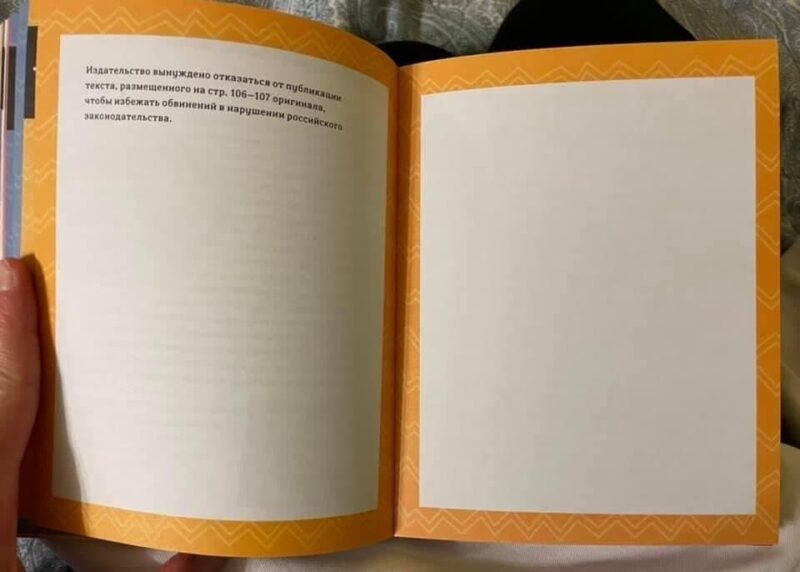 The blank censored pages of the “Welcome to your period!” book. Photo by Andrey Konyaev on Twitter [2].

Russian publishing house Belaya Vorona has removed the contents of two pages devoted to transgender people from the Russian-language edition of a popular health guide aimed at teenage girls.

“Welcome to your period!” is a book written by Australian journalist Yumi Stynes and practicing medical doctor Melissa Kang that aims to provide inclusive, body-positive information about menstruation and periods for 10-14 year old girls.

The censorship of the Russian edition was first reported [3] by the independent news website Podyom. The publishing house's co-founder Tatiana Kormer told Podyom that the decision to pull the two pages was made after the publisher received legal counsel warning they could potentially face legal problems.

You know what lawyers always say? There is enforcing the law in practice, and then there is the law… And then they told us cheerfully: if you do publish it as is, we'll provide you with legal defense pro bono. So we gave it some thought and decided that while we appreciate the gesture, we'd rather be on the safe side.

As a result of the censorship decision, the book was published with two blank pages in place of the section on transgender people. The top of one page now reads:

The publishing house has had to forego publishing the text located on pp. 106-107 of the original so as to avoid accusations of violating Russian legislation.

According to a photo-post [4] by Podyom reporters on Twitter, in the Ukrainian-language edition of “Welcome to your period!” the pages in questions have been preserved in their original form.

[translated tweet]: Two pages have been deleted from the teen book “Welcome to your period”. The pages discussed transgender people

Another way to avoid blank pages would have been to mark the book as “16+” (i.e., suitable for readers over 16 years old), but Kormer posited [3] that imparting this information to children over 16 was “too late.” According to Kormer, making the book available to teenagers was more important that “preserving the deleted information”.

It's not clear what specific legislative acts Kormer and her lawyers referred to when justifying the censorship decision. Transgender individuals have long faced [8] discrimination [9] in Russia, including by being classified as mentally ill and banned from driving. In 2020, Russian lawmakers drafted a bill banning transgender people from legally changing their gender, but pulled [10] it after widespread pushback from activists and human rights organisations. The bill was co-authored by Senator Yelena Mizulina, who also spearheaded Russia's notorious 2013 law [11] banning “propaganda of homosexuality”.

The latest act of censorship is part of an ongoing history of repressions against LGBT communities in Russia, such as the case of Yulia Tsvetkova, a feminist LGBT activist facing criminal prosecution [12] for posting body-positive artwork on her social media pages.

Human rights activists have accused [13] the authorities of further marginalizing Russia’s LGBT community with laws aiming to enshrine a traditional understanding of family and framing LGBT diversity as a threat to minors. Such appeals to conservative values likely aim to strengthen support for President Vladimir Putin after two decades in power.

Putin himself railed against “monstrous” Western liberal values in a recent speech [14] at the Valdai Club, juxtaposing them with Russia's “reasonable conservatism” and calling out acceptance of transgender individuals specifically:

People who dare to say that men and women still exist as a biological fact are almost ostracized… Not to mention the simply monstrous fact that children today are taught from a young age that a boy can easily become a girl and vice versa.

An October 2021 report [15] by the Council of Europe found that Russia has ignored recommendations by the European Commission against Racism and Intolerance and decisions by the European Court of Human Rights with regard to abolishing the legal ban on the provision of information about homosexuality to minors. According to CoE, the Russian authorities indicated that the Russian Constitution provides for the “support, strengthening and protection of the family, [and] preservation of traditional family values” as one of the tasks of the government, but that such “traditional family values” do not include “promotion of homosexuality among minors”.