"I don’t have a smartphone to attend classes" 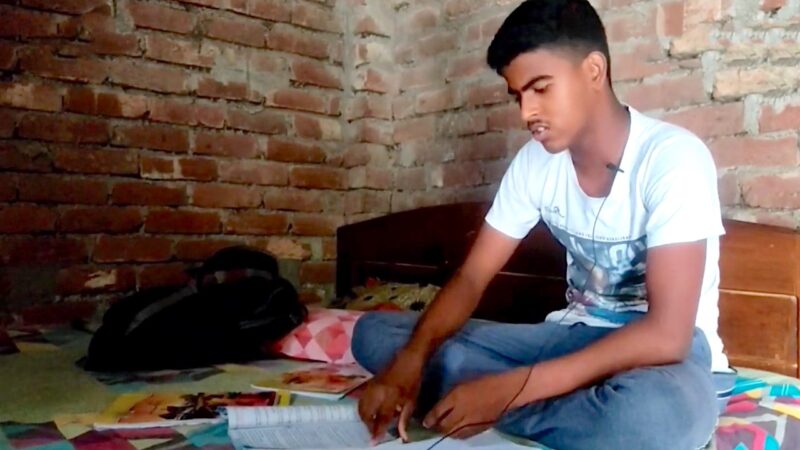 Bijoy Mal, a secondary school student from West Bengal's Nadia district at his house. Image via VideoVolunteers. Used with permission.

This post by Ankush Sharma originally appeared on Video Volunteers, an award-winning international community media organisation based in India. An edited version is published below as part of a content-sharing agreement.

As soon as Prime Minister Narendra Modi announced a 21-day lockdown on the eve of March 24, 2020, many businesses and sectors (both organised and unorganised) came to a complete standstill. As the lockdown kept getting extended, we saw images of daily wage labourers, who had migrated from their small towns and villages, going back to their homes as they were unable to earn enough to feed themselves, let alone pay rent to upkeep their urban accommodation.

While every sector limped back to normalcy with every new wave of ‘unlock,’ one sector continued to function online: education. And though the lockdown has been challenging for every social class and country, it has had devastating consequences for primary education in rural schools in India. The authorities have tried their best to innovate. Teachers were trained overnight on online presentation platforms and children adapted to the ‘new normal’ of attending classes on the internet. Even exams were conducted virtually. More than 60 percent of the Indian population still lives in villages, and, though a whole lot of Indians are getting on the internet at a rapid pace, there is a long way to go, especially when it comes to online education.

The authorities announced moving classes to the virtual world — but never checked if the infrastructure to access that education is in place. Video Volunteers Community Correspondents (CCs), who come from some of the most underprivileged and marginalized communities in India, report that a large number of households do not have a smartphone to attend the scheduled online classes.

In many households of India's rural population, there is no smartphone or only one smartphone per family, which makes it impossible for children to attend online classes. Image via VideoVolunteers. Used with permission

“I find it difficult to study these days as the schools are closed for more than a year now and I don’t have a smartphone to attend classes,” said Bijoy Mal, one of the secondary school students from West Bengal’s Nadia district that our community correspondent Dibyojyoti Karmakar spoke to. In some of the other cases, one smartphone is present per family, averaging two adults and two or three children. Their classes often clash with each other and they end up being irregular. If the smartphone is carried away to work by the man of the house, no child attends any classes.

In a rather unsettling case reported by CC Kalpana Jawade, Sunil Tungar, a former student from the Kalgaon village of Maharashtra’s Yavatmal district, is forced to work as a labourer on farms as he is unable to continue his education. The other big dilemma folks of Kalgaon face is whether to use their daily wages to buy food and essentials or use the money to recharge their smartphones and get internet access.

In the experience of the child of one of our CCs, Goretti Kujur from Jharkhand, the teacher is not able to fully communicate with the students due to poor network connectivity. Children, especially young ones, are still adapting to this new form of education and are not able to fully grasp the lectures.

In another case from Puri district in Odisha, our CC Sumitra Barik reports about a bright student who is unable to continue her studies due to lack of resources.

Usha Patel, our CC from Uttar Pradesh’s Jaunpur district, spoke to the principal of one of the schools in her community to find out their perspective on this new form of online learning. Ram Kumar Mali, the headmaster of primary school at Sarangdih said:

The first layer is obviously of those who have an Android smartphone and can attend live classes on Google Meet. If they aren’t able to attend, we share notes through WhatsApp for them to access later if they weren’t present during the class. If the family doesn’t have a smartphone, we ask them to listen to lectures on regional television channels or the local radio station where the government produces episodes of classes.

However, the reality is there are many families with no radio or television set either, who live in a virtual information blackhole. The Uttar Pradesh government, under the previous regime, did distribute free laptops to students of secondary schools. However, that initiative was limited to urban areas and never reached the interiors of the state.

Pramila Kumari, a student in fifth grade at one of the primary schools in Mahalidih in Jharkhand’s Gola block says she hasn’t gone to school for more than nine months now. What is alarming to note is that several young children across rural India’s towns and districts are unlearning the habit of going to school and attending classes, which will have long term effects on the skills that this generation acquires, which will reflect on the nation’s overall capabilities. 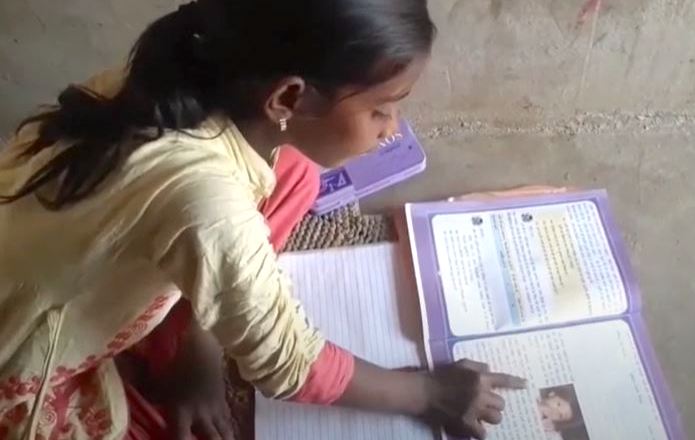 Several bright students like Pramila Kumari haven't gone to school for nine months and are forced to study by themselves. Image via VideoVolunteers. Used with permission

Many students, who were sent to school by their parents because they would get free meals, are now receiving dry rations (subsidised food). But the quantities are meagre compared to the average diet of a school going child. “We receive one kg of wheat and one kg of rice, but that isn’t enough. Earlier, my child used to go to school and eat his lunch there,” said Asha ben from Surat, Gujarat while speaking to our CC Mumtaz Pathan.

In such a bleak scenario, social activists and those who work for the community have taken it upon themselves to continue the education of rural children. CC Chetan Salve from Nandurbar, Maharashtra, along with the Narmada Bachao Andolan, created Nirman Shala, a community-run initiative where adults who have passed secondary school or are graduates teach more than 300 students from the local villages. At 7:30 am the school starts, with regular classes including period bells and break times. 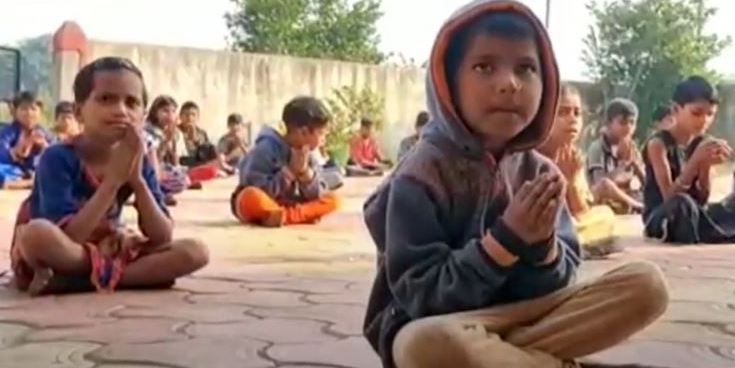 The Nirman Shala team from Maharashtra ensured that classes resume with their usual schedule while maintaining physical distancing at all times. Image via VideoVolunteers. Used with permission

In another case of continuing education, while maintaining physical distancing, the gram panchayat of Madhota in Chhattisgarh’s Bastar district has invested money in installing loudspeakers and amplifiers in at least 12 mohallas (wards) of the village so that children can continue their education. At present, this initiative is limited to children between the first and fifth grades.

More such community-led initiatives are the need of the hour so that young children do not forget the values imparted to them through education and continue their journey towards being independent and resourceful citizens of the country.