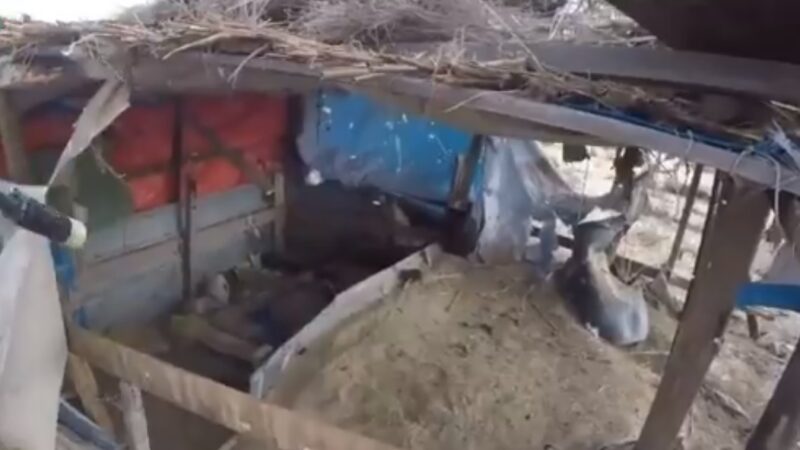 Videos and statements released by Egypt’s military spokesperson are the only source of information on developments in the region, amidst a state-imposed media blackout. Screenshot taken from a propaganda video [1], which sparked calls for investigating soldiers allegedly carrying out extrajudicial killings in North Sinai.

A recent report [2] issued by the Sinai Human Rights Foundation (SFHR), a homegrown group of activists and researchers that monitors violations committed against civilians by both the army and extremist militants in the Egyptian peninsula, states that as many as 112 civilians were killed in 2019 and 2020, as a result of the fighting between the two parties.

Released on September 30, the report—titled “We Just Want to Live [2]”, after a quote from one of the 212 Sinai residents cited in its pages—said 25 of those killed by fire from both the military and militants were children, while 22 were women. Civilians injured during that period totaled 134, of whom 36 were children.

North Sinai, a largely barren triangle locked between the blockaded Gaza enclave and Egypt's mainland, has been the site of a years-long, anti-terrorism campaign, as the local branch of the Islamic State (IS), known as the Sinai Province, took root in the region. From this foothold, it staged deadly attacks on troops, policemen and government officials, as well as on tourists [3] and members of the country's religious Coptic [4] minority.

In response to the murder of thousands at the hand of militants, the Egyptian army waged [5] several military campaigns to uproot the insurgents. However, it simultaneously tightened its grip on the region's residents, who fell victim to violent crimes committed by both warring factions. A curfew [6] restricted movement in and out of the region, and denied access to independent journalists while enforcing a media gag [7] on updates—unless the statements were issued by government forces.

The UK-based executive director of the SFHR, Ahmed Salem, said [2]:

The number of abuses recorded in the report shows a non-written agreement between the conflicting parties on the disregard for human rights or the lives and dignity of the people of Sinai, which led to vast areas of Sinai becoming unsuitable for life, where abuses and violation of civilians are rampant.

The report documented [2] five incidents of military airstrikes targeting civilian houses, killing 30 civilians and wounding 22 others. Houses, schools and medical centres have been struck by raids, the report said. Civilians were forced to flee their homes, while random fire by soldiers—in the absence of any real threat or imminent danger—left 26 civilians dead and 33 others wounded.

The Foundation found compelling evidence that government authorities provided false information in three official statements published by spokespersons for the Ministries of Defense and Interior, which raises several questions about the credibility of these statements and the legality of the killings.

On August 5, Amnesty International released [9]a statement urging Egypt's public prosecutor to “urgently investigate what appear to be extrajudicial executions by members of the military in North Sinai.” Commenting on a military propaganda video [10] released by the spokesperson of the Egyptian armed forces just days before, Philip Luther, Amnesty International’s Middle East Research and Advocacy Director, was quoted [9] in the statement as saying:

“The deeply disturbing footage in this Egyptian military propaganda video, which celebrates the armed forces’ deliberate cold-blooded killings of two unarmed people clearly not posing a threat to life, offers a glimpse of the shocking crimes committed in the name of countering terrorism in Egypt.

The video showed a person, who was sleeping in a makeshift tent, getting shot at close range by a soldier. In another clip, an unarmed man is shown running in the desert as bullets puncture his body; he ultimately falls to the ground.

Over the years, from the start of the curfew imposed on North Sinai in October 2014 and its accompanying media blackout, residents of the region and their sympathizers have written about many instances of extrajudicial killings, as well as other violations they have faced, via the hashtag #سيناء_خارج_التغطية [11], or #Sinai_Out_Of_Coverage [12].

Meanwhile, Egypt's government troops have enjoyed full impunity, never confessing to intentionally harming civilians. However, on February 10, in an unprecedented acknowledgement of civilian loss of life since the beginning of these anti-terrorism campaigns, the semi-official National Council for Human Rights said [13] that 1,836 civilians had been killed in the crossfire, and 2,915 wounded.

According to SFHR's report [2], there have also been dozens of arbitrary arrests of North Sinai residents, with many of them allegedly held for months without charges, while others—including women and children—were captured in order to pressure their relatives into surrendering to security forces.

In March, the Human Rights Watch issued a statement [14] saying that, between late 2013 and July 2020, Egypt's army destroyed at least 12,350 buildings as it created a buffer zone along the borders with Gaza. HRW said that the Egyptian [15] military’s ongoing “home demolitions and forced evictions during the armed conflict in North Sinai governorate are violations of international humanitarian law, or the laws of war, and likely amount to war crimes [16].”

Militants of the Sinai Province, the report added [2], carried out their own set of crimes and violence against civilians in North Sinai, killing, kidnapping and torturing hundreds of residents throughout 2019 and 2020. This appears to have been done primarily on religious grounds, as their targets were Copts and Sufis. Militants are hostile towards these religious minorities, viewing them as backers of a regime that continues to prosecute the predominantly Islamist supporters of former president Mohamed Morsi [17], who was removed from power [18] in a 2013 coup d'etat.

Scores of civilians were executed by the local IS-affiliate, the report said, under the pretext that they were either supporting the government or working on economic projects affiliated with the Egyptian army. In addition, militants executed some of the soldiers they captured, which the SFHR noted is a war crime.

The report also documented [2] the injury of 23 civilians, mostly women and children, as a result of explosive devices that were planted, and the killing of an additional 22 people, via bombs set off by the terrorist group.