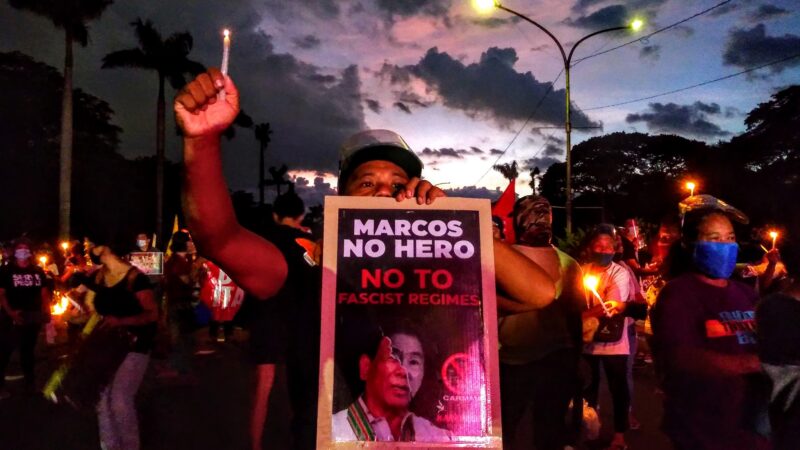 Protesters condemn the brutal legacy of the Marcos government. Photo [1] from Karapatan.

He has been leading in several [3] pre-election surveys [4], which could allow him and his family to regain [5] political power after being ousted by a People Power uprising in 1986. 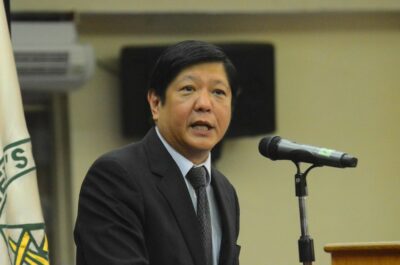 In 1980, he became Vice Governor of Ilocos Norte province, running unopposed under the Kilusang Bagong Lipunan party of his father, who was ruling the Philippines under martial law at the time. Bongbong Marcos held the position of Governor of Ilocos Norte in 1983 until his family was ousted from power by the People's Uprising (EDSA I). He fled to Hawaii in exile [8] in February 1986.

His father appointed him chairman of the board of Philippine Communications Satellite Corp (Philcomsat) in early 1985, a prominent example of “crony capitalism.” [9] The government sold its majority shares to Marcos cronies in 1982, despite being very profitable because of its role as the sole agent for the Philippines’ link to global satellite network Intelsat. Philippine government investigators later found [10] that President Marcos acquired 39.9 percent — 19.95 million US dollars worth — of the company's shares through front entities. This allowed the elder Marcos to appoint Bongbong chairman of the Philcomsat board in early 1985, allowing Bongbong to draw a monthly salary “ranging from USD9,700 to USD97,000″ despite rarely visiting the office.

After the death of his father Ferdinand Marcos Sr. in Hawaii in 1989, President Corazon Aquino eventually allowed the remaining members of the Marcos family, including Marcos Jr., to return to the Philippines to face various charges on November 4, 1991.

Since then, the Marcoses have launched a systematic campaign to rehabilitate [11] their notorious legacy and make a come back to power.

Imelda Marcos [12] ran for president in 1992 but lost to Fidel Ramos — a key figure in the Marcos ouster. But in 1995, she won a congressional seat in her hometown, Leyte, where her relatives have wielded political influence for a long time. In 1998, Imelda tried again running for the presidency but did not succeed.

Bongbong Marcos was elected as Congress representative of the second district of Ilocos Norte from 1992 to 1995. He ran for and was elected governor of Ilocos Norte again in 1998. After nine years, he returned to his previous position as congressman from 2007 to 2010, then became Senator of the Philippines under the Nacionalista Party from 2010 to 2016.

Imee Marcos, the elder sister of Bongbong Marcos, became the representative of the second district of Ilocos Norte, serving three terms from 1998 to 2007. She became a senator in 2019.

The remains of the late dictator arrived in the Philippines more than seven years after the Marcoses went into exile. But the dictator's remains were only allowed to be buried in the Libingan ng mga Bayani (Heroes Cemetery) on November 18, 2016, a few months after President Rodrigo Duterte assumed office. The Supreme Court affirmed [13] its 2016 decision allowing the burial of the former president in the Libingan ng mga Bayani. The Marcoses’ alliance with incumbent President Duterte was a crucial factor in this decision.

Marcos Jr. ran for Vice President of the Philippines in the 2016 election but lost to Congresswoman Leni Robredo. He then filed an electoral protest at the Presidential Electoral Tribunal, with claims and accusations of cheating, which was dismissed [14].

Cambridge Analytica Ltd., a British political consulting firm that describes itself as a “global election management agency,” was reportedly approached [15] by the Marcoses to rebrand their family image. The firm is best known for managing the Facebook-Cambridge Analytica data scandal.

More proof of the Marcos family's systematic effort to manipulate public opinion and the legacy of the late dictator is reflected in scores of Facebook pages and accounts in the Philippines, including those linked to President Rodrigo Duterte and Imee Marcos, which were taken down [16] by the social media company for violating its spam and authentication policies.

Bongbong Marcos’ campaign narrative [17] propounds the idea that “the son should not be liable for the sins of his father” and that decades of disunity over the past should give way to moving on for a united and prosperous future.

Opposition to the Marcoses return

Notwithstanding Marcos's advantage in resources (ill-gotten wealth), in-roads of historical revisionism [18], effective use of social media to influence the public, and significant return to power, his presidential candidacy faces formidable obstacles.

Foremost is from an ally, Davao City Mayor Sara Duterte, daughter of the incumbent president. She topped all pre-election surveys, and Bongbong is second only to her. As President Duterte's daughter, she enjoys the advantage of the resources and influence of the sitting president. Though Mayor Sara is playing coy [19] about running for president, she could still change her mind before the deadline for candidates submissions on November 15. A Duterte dynastic succession in the presidency will protect President Duterte from being indicted for “crimes against humanity” at the International Criminal Court amid numerous ongoing criminal cases.

The growing anti-Duterte and anti-Marcos coalition of opposition candidates is a force to reckon with.

Vice President Leni Robredo, a major presidential contender, is clear on stopping [20] the Marcos, saying that she also wants to prevent a brand of government similar to President Rodrigo Duterte's regime.

Senator Manny Pacquiao, an eight-division world boxing champion and a presidential aspirant, said [21] that there is a clamor for the Marcos family to return alleged billions of dollars of ill-gotten wealth. He added that if he is elected president, he will review all investigations against the Marcoses as well as the ill-gotten wealth recovered by the Presidential Commission on Good Government.

Former legislator Neri Colmenares, who was tortured as a young activist during the Marcos presidency, wrote about the need for unity to stop the return of the Marcoses.

…preventing a Marcos restoration, and uplifting the country from the catastrophe of the past five years.

We remain hopeful that unification can still be possible among the ranks of those opposing a Duterte or Marcos presidency.

Opposition to a Marcos presidency is backed with a strong legal basis. On February 25, 2013, President Benigno Aquino III signed [23] into law Republic Act No. 10368, otherwise known as the “Human Rights Reparation and Recognition Act of 2013.” The law acknowledged the State's legal and moral obligation for the gross human rights violations committed by the regime of former President Ferdinand E. Marcos during martial law from September 21, 1972, to February 25, 1986, and one month before and after the period. The law recognized that there were civil, political, and economic rights that were violated by the authoritarian regime.

In the same way that the struggle of the people did not end with the downfall of the Marcos dictatorship, the campaign to stop Marcos and Duterte from returning to and staying in Malacañang continues, as a way to do justice for the Filipino people of the martial law generation and all other generations after Duterte.