How Dave Chappelle's new comedy special went over in the Caribbean 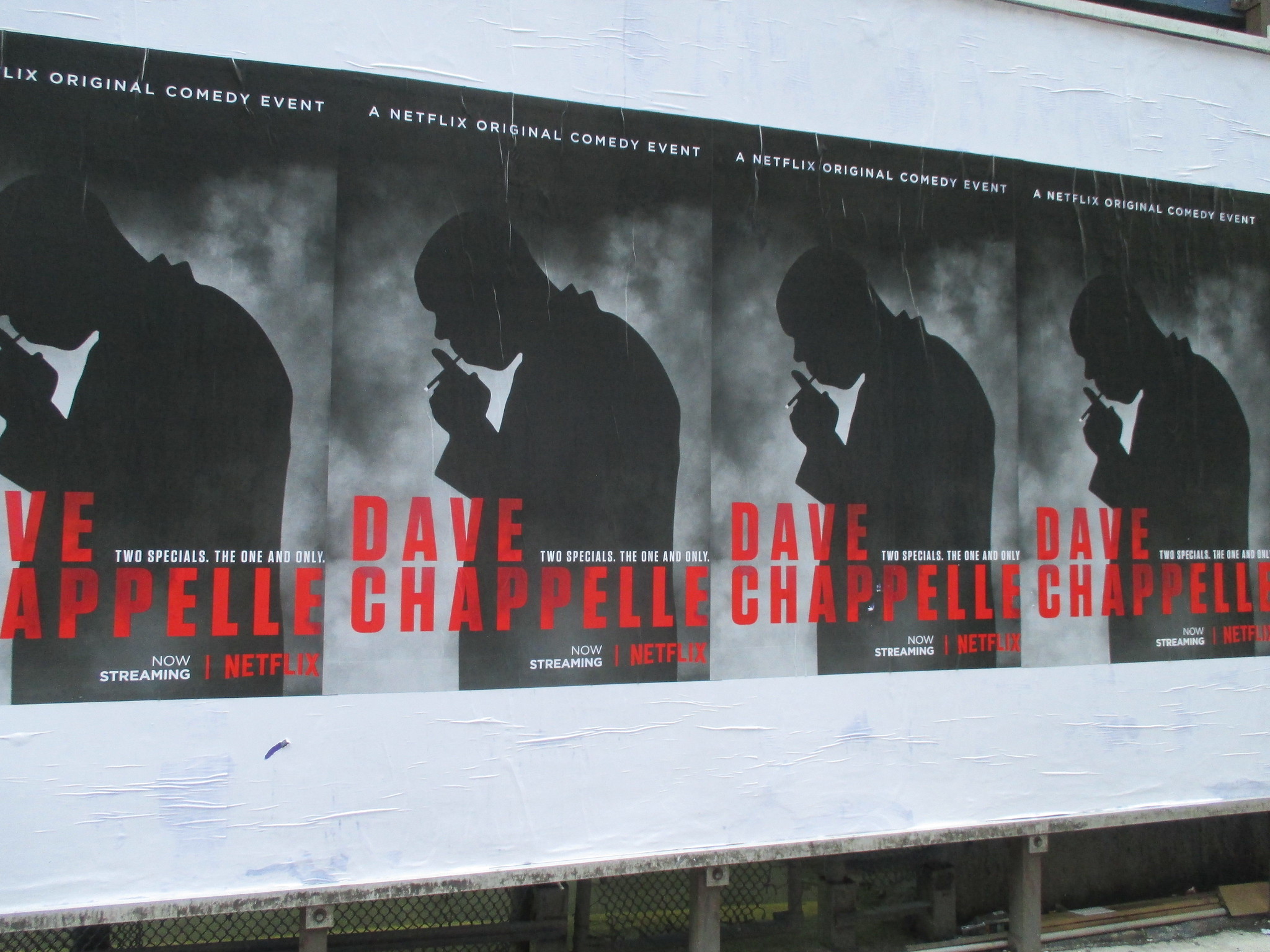 U.S. comedian Dave Chappelle, who has earned the moniker the “Greatest of All Time” (GOAT) for his ability to deftly shine a spotlight on uncomfortable truths through his unique brand of no-holds-barred humour that leaves audiences agape, is in hot water—as he predicted he would be–thanks to some of the things he said about the LGBTQ+ community in his latest Netflix special, “The Closer”—including the manner in which he referred to transgender people's genitals, and his contention that “gender is a fact.”

The show, which began to stream on October 5, has angered the global LGBTQ+ community. Activists have been pressuring Netflix to drop the programme; so far, the company has remained resolute in its support for the comedian, with CEO Ted Sarandos noting in a company email:

Chappelle is one of the most popular stand-up comedians today, and we have a long standing deal with him. […] As with our other talent, we work hard to support their creative freedom – even though this means there will always be content on Netflix some people believe is harmful […]

We don’t allow titles on Netflix that are designed to incite hate or violence, and we don’t believe The Closer crosses that line. I recognize, however, that distinguishing between commentary and harm is hard, especially with stand-up comedy which exists to push boundaries. […] These are hard and uncomfortable issues.

After a subsequent protest by employees and others, however, Sarandos acknowledged that he “screwed up” in the way he spoke to staff about Chapelle's special.

In the Caribbean, long deemed a homophobic region, thanks to everything from anti-gay sentiments in dancehall lyrics and political rhetoric, to violence—some of it fatal—against gay and trans people, the reception to Chappelle's show has been mixed, with some social media users taking offence and others not understanding how his message could be interpreted in the way that it has.

If you find Dave Chappelle's stand up, or DaBaby's comments, offensive… you're going to have a hard time in Jamaica #thatisall

That is the essence of Chappelle's craft. He wants to make people consider uncomfortable issues, some of which will have them shifting in their seats—but was the show high-level comedy, or did he cross a line? On Facebook, Rhoda Bharath explained:

When you examine The Closer properly you realize that what Chapelle did last night was present the final chapter in the book that was his Netflix series.

Every single routine was linked by themes and even recurrent characters.

Dave Chapelle, a stand up comedian, employed leitmotif and major and minor characters in his satire.

Over the course of each episode he built his deconstruction of the importance of comedy to the human condition using the various gender and LGBTQ movements of this century as his prisms.

Life is not a zero-sum game.
There has to be give and take.

G.O.A.T. does not begin to capture this man's talent.

In a Facebook Messenger conversation with Global Voices, Bharath continued:

Dave wanted us to grasp that HE is READY to have the uncomfortable conversation. The one most of us shying away from. And that conversation is that oppressed groups can also do oppressive things and that needs to be discussed and called out just as much as their right to exist and have space in which to exist must be respected.

Chappelle's discomfort with transgender people aside, a core issue of his special focused on the fact that Black people, who have endured centuries of injustice and continue to face active and institutionalised discrimination, have got much less further in the fight for equal rights than the LGBTQ+ community has.

He mentioned this several times in the show via different mechanisms, including his reference to Da Baby, a rapper who has said offensive things against the LGBTQ+ community—over which there was public outcry—but whose career appeared to be under no threat of cancellation after he killed a Black man in Walmart. (The rapper was eventually only charged with carrying a concealed weapon.) Chappelle said:

The kid made a very egregious mistake […] He once shot a n****—and killed him—in Walmart […] and nothing bad happened to his career. Do you see where I'm going with this? In our country, you can shoot and kill a n****, but you better not hurt a gay person's feelings—and this is precisely the disparity I wish to discuss.

Many international LGBTQ+ activists, however, felt that Chappelle's Black rights versus trans rights stance was tantamount to the erasure of Black trans people.

Except he didn't say ‘white gay people’. He said ‘gay people’ as if there are no black gay people. It is an extremely reductive thing to say.

One Trinidadian netizen, Brigette R. Joseph, could not reconcile Chappelle's approach with the everyday realities the Caribbean LGBTQ+ community faces. In a private Facebook update which she has given permission to quote from, she said:

I am finally up to date with Mr.Chappelle’s BS.
Do people just not understand how irresponsible and damaging it is for ANY media, to allow for transphobic comments to be made, even in the slightest? Even just a little bit?

We need to do better. It’s not funny ever.

And you can argue with yourself, when you have very close friends who are trans and who you worry about on a blasted daily basis you [could] check me back.

Writer Amanda Choo Quan (also in a private post with permission to republish) had a similar perspective:

Supporting trans people would really be edgy, since Chappelle has his fame and they have nothing. (If you think the Internet is ‘something’, consider how many trans folk are still dying even though you feel like cancel culture threatens YOU).

[…] we need to be honest in our response to what he's doing. You can point out that the jokes are transphobic in nature while also highlighting the truth about his message and its possible impact on its target audience.

Via WhatsApp, Global Voices spoke with Xoe Sazzle, a Caribbean trans activist, who said that she hadn't watched “The Closer,” nor did she plan to, adding:

If [we] put half of the attention that they're pouring into Dave Chappelle and into dicing apart his comedy special, and clamouring and boycotting Netflix […] into the real systems of oppression and the real points of change—which do not lie in the entertainment industry and do not lie in capitalist organisations such as Netflix—then we'd be able to experience some real change, and we'd be able to really benefit from those conversations.

[…] I think a lot of the anger, angst, roaring, etc. is quite misdirected, but that's how popular culture works. […] Pop culture, capitalism…designed to sell…and it's selling! Netflix is making so much money. I think from that perspective, both Dave Chappelle and Netflix have been successful and effective.

Meanwhile, comedian Simmy the Trini said she was “offended”:

I'm offended that people didn't listen to him to try to understand the points he made. […]

Dave Chappelle is a black man, African American, a Muslim and a global comedic icon known for taking strong positions for his beliefs even if that means walking away from millions of dollars or rubbing people the wrong way.

Against that backdrop, he has weighed the LGBTQ community and feminism and found a glaring truth. Cancel culture is often pushed as a narrative by people who don't support their own kind.

As a society and arguably in defense of a better society, we are quick to silence people who have ‘offensive’ views. We shouldn't, theoretically speaking, encourage racism, sexism, sizeism or homophobia. The idea is to work toward harmony and a level of respectful acceptance of the wide spectrum of people experiencing life differently.

Dave points this out brilliantly. A person can have empathy for another group without sharing their beliefs or participating in their ideologies. Respect can be shown and tolerance extended without forcing people to subscribe to beliefs that are in conflict with their own.

She was also careful to listen to dissenting voices:

I've seen the arguments from the other side and I listened with keen ears to establish if Dave Chappelle said anything that was irresponsible […] scrutinizing his words in search of reasons to be outraged or offended. I found nothing he said that warranted the backlash or calls for the removal of his special.

As a comedian, I found his set well-composed and brilliantly delivered. […]

You don't have to agree with him or mirror his views. They are his opinions and you are entitled and free to have yours. There is no right or wrong here – just a wonderful opportunity to understand a different perspective.

As is often the case with Dave Chappelle's comedy, people may just have to agree to disagree.