Namewee and Kimberly Chen's music is now banned in China 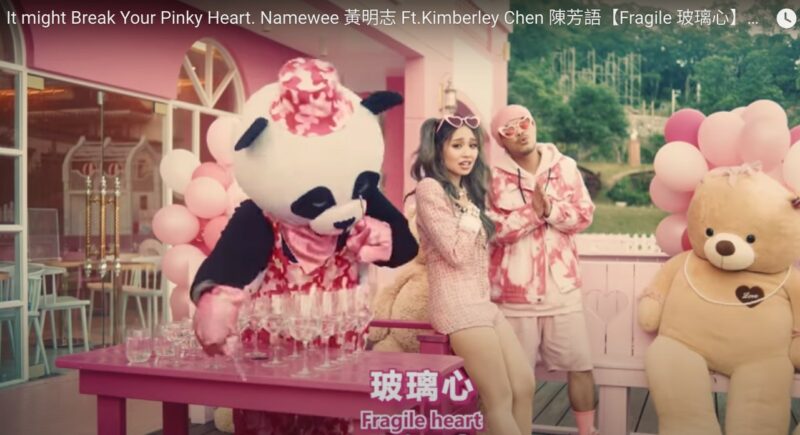 Malaysian-Chinese bad boy rapper and music producer Wee Meng Chee, aka Namewee, has broken the hearts of mainland Chinese online patriots, commonly known as little pinks, with “Fragile” (玻璃心 or Glass Heart), his latest music collaboration with Australian singer Kimberly Chen. Both artists were blocked from most mainland Chinese social media and streaming platforms within 24 hours of the song's release.

The music video, released on October 15, 2021, has been viewed more than 5.5 million times so far on Namewee's YouTube channel.

Distinct from Namewee's other rap songs, the cute, pink music video is packaged as a love song, with both artists pouring out their frustration about their unreasonable partners. They say their partners have fragile hearts but also pick fights with others by claiming that everything belongs to them.

The political satire is rather obvious. The video begins with a warning:

Please be cautious if you are a fragile pink. Warning: viewers with a glass heart should be cautious.

The term “glass heart” is often used to describe mainland Chinese online patriots who often accuse others of “hurting their feelings.”

Images of cotton and the slang phrase “nmsl” (meaning “your mom is dead”) evoke memories of national incidents like the Xinjiang cotton campaign and the feud with Thailand netizens in 2020.

The lyrics mock the fragile pinky lover for being fond of eating “dogs, cats, bats and civets” and “climbing over the wall” (which means circumventing censorship) and the country's ruling elites for “harvesting garlic chives or leeks” (slang for rent-seeking).

The leek, cotton, panda, winnie the pooh, common prosperity, re-education, pineapples – damn Namewee is hitting all the talking points. My default reply to nmsl from now on https://t.co/uJeWaj2NqM

As expected, both artists were banned from major mainland Chinese social media platforms, including Weibo, Douyin (Chinese version of Tiktok), Tencent and QQ Music, etc. But they were prepared for the “break-up,” Kimberly Chen parodied the lyrics of “Fragile” on her Instagram account in response to the ban:

I am sorry for hurting you. It’s okay to delete Weibo, Oh, I hear a sound, is fragile heart broken into pieces on the ground. It’s Okay I still have IG and I still have FB…

“Don't be afraid to be yourself!” She encourages her fans with the same Instagram message.

This is not the first time Namewee poked fun at mainland Chinese online patriots. In August, after the Chinese government praised the Taliban for becoming more rational, he posted a list of eight recommendations to the Afghanistan Taliban under the title, “Measures that the Taliban have to take to stabilize Afghanistan” on Weibo:

As all these recommendations are implemented in China, many mainland Chinese netizens interpreted his comments as shaming the country's policies. Namewee's Weibo has been banned ever since.

But outside the Chinese Great Firewall, Namewee and Kimberly Chen have won much applause for their courage to cut ties with the world's biggest market for Chinese artists. For example, on Twitter, @Lindell_Lucy said:

Hahahahahaha. Buy the album! Support these musicians! Almost everyone in the entertainment industry has sold out in order to earn money in China, but not these two! https://t.co/IyYrMKASW7

On Namewee's YouTube channel, a majority of comments praise the music video. One said:

I think you understand the country more than other mainland Chinese singers, many of whom are also little pinks. There are so many meaning embedded in the song, yet the presentation is so cute. I don't think anyone from mainland China is capable of doing this. Thank you so much. I believe this song will be remembered.

Many from mainland China also expressed their appreciation:

As someone coming from a small town in northwestern China, my first impression is that the music is really great and it reflects the reality. Wee Ming Chee is a courageous person and deserve our respect. However, as a mainland Chinese, I feel sad that I am being represented by a minority of ignorant little pinks. I love this country, and when seeing a brunch of gongs drag us down, we can only sob in our hearts. Inside [China], we can only remain the silent majority, the environment does not allow us to speak…

Namewee has been rather controversial in Malaysia due to his rebellious rap style. He had been arrested several times and charged twice for insulting the national anthem in 2007 and insulting Malaysia utility company TNB in 2009.  Earlier in March, the Malaysian police issued a warrant for his arrest because he released the film Babi (which translates to pig), which allegedly contains elements of racism as “pig” is an insult in Malay. The film depicts ethnic tension within Malaysian schools and was nominated for several international film festivals. Eventually, Wee issued a video apology, and the police did not press the charge.

With the success of “Fragile,” Namewee has established himself outside Malaysia and will likely become a popular icon against authoritarianism in Asia.