The creation of the Kaptai dam and lake displaced over 100,000 people 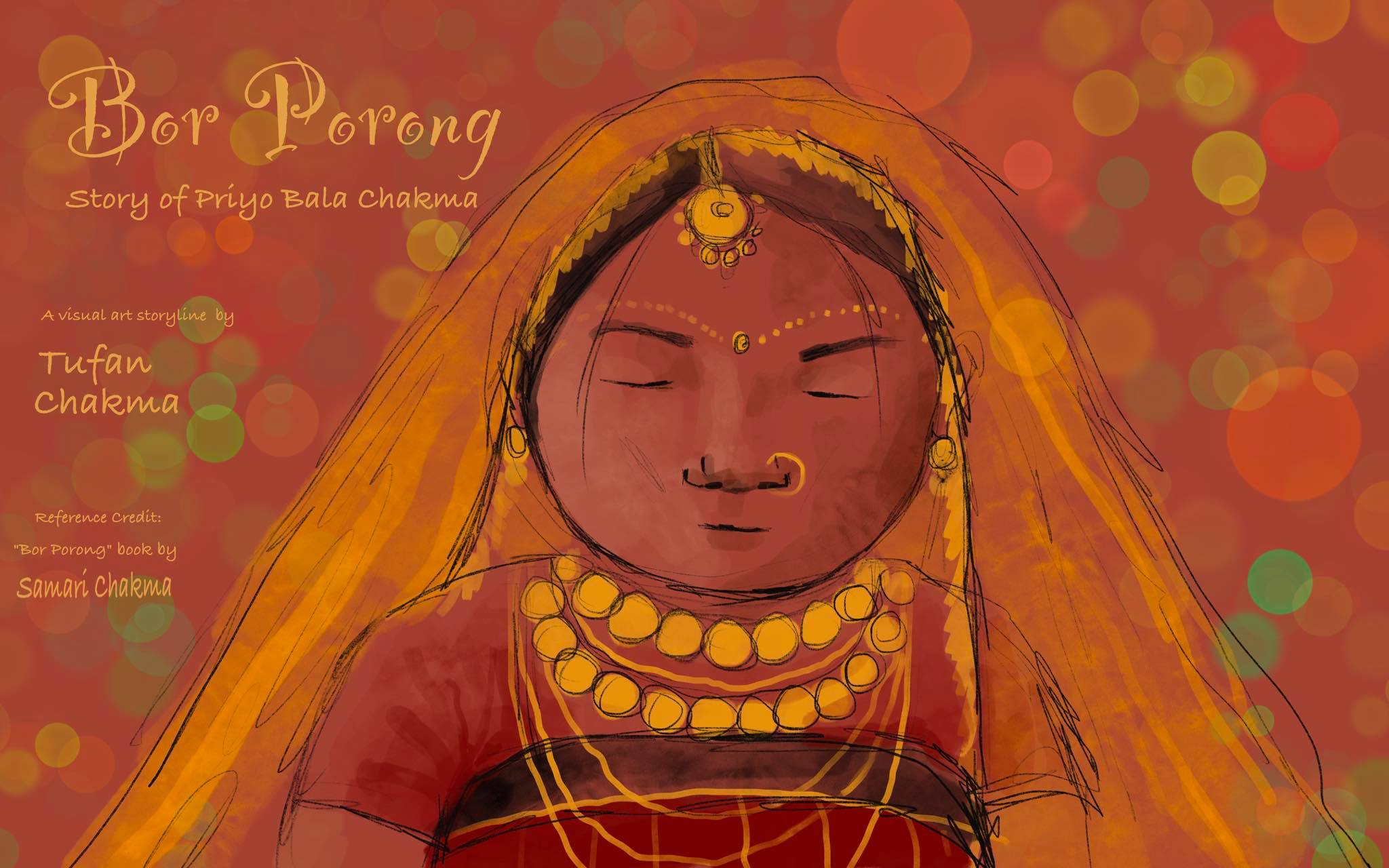 Kaptai Lake is the largest artificial lake Bangladesh and a popular tourist destination. Located in the Rangamati district of the Chittagong Hill Tracts, Kaptai is a sought-after holiday destination for many Bangladeshis (foreigners need special permission to visit). For people from outside the region, the lake may be a place for spending good times, but to the local indigenous Chakma people it is the site of a heartbreaking event called Bor Porong, or “the great exodus.”

Kaptai Lake was created primarily for hydroelectric power generation when the Kaptai Dam was built in 1962. The dam, created for the Karnafuli Hydropower Station, submerged 54,000 acres of agricultural land. Over 100,000 local people from about 18,000 families, mostly from indigenous communities, were displaced during that period, resulting in the forced migration to neighbouring India of over 35,000 Chakmas and Hajongs.

As the story of the dreams and livelihoods of thousands of families shattered because of this lake is unknown to many, Tufan Chakma, a young indigenous artist, wished to highlight this heartbreaking incident for a new generation. The student of fine arts has featured the story of the Bor Porong in a visual story on Facebook. The work is based on an interview with Priyabala Chakma in the book “Kaptai Dam: The Great Exodus – Autobiography of the Drowned,” written by Advocate Samari Chakma. 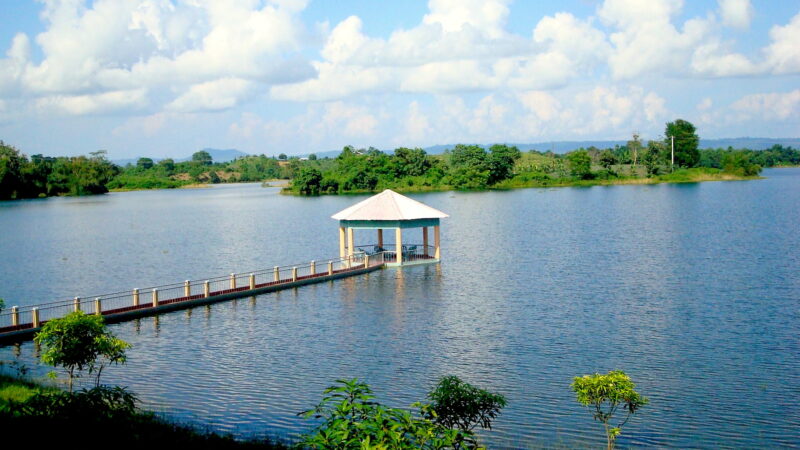 Kaptai lake in Rangamati, Chittagong Hill Tracts. Image from Flickr by the author. Used with permission.

Tufan Chakma spoke to Global Voices Bangla on Facebook Messenger about his motivations:

The incident that rattled and triggered divisions among the local Chakma community and led to the exodus of a lot of people remains unheard as not much work had been done around it.

Nowadays we have become very much dependent on social media. Throughout the day, various issues appear and slide down in our Facebook newsfeed. I thought, if we can highlight such a big historical event visually in the newsfeed, some people may notice. So I recreated the incident in these arts using my imagination and posted them on on my Facebook page Tufan's Artbin.

An edited excerpt of the selected text and artwork published on Facebook by Tufan Chakma is presented below with the permission of the artist. The original text is in Bangla. 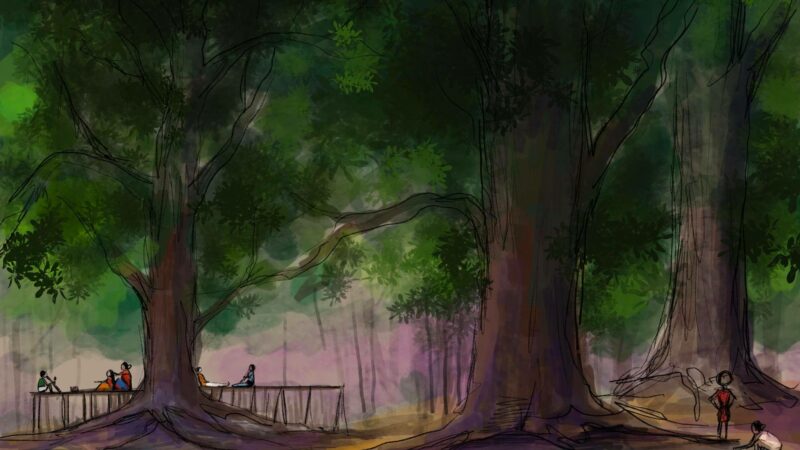 We used to take refuge under these great mango trees to cool down. Artwork by Tufan Chakma. Used with permission.

My name is Priyo Bala Chakma and I am 65 years old. When I married in 1958 at the age of 17, I said goodbye to my father’s village and moved to my in-laws’ house in Burighat village near Rangamati district. The village was so green, you could see only greenery all around.

When temperatures rose in the afternoon, men, women, and children used to take refuge under these great mango trees to cool down. How soothing and comfortable these tree-shades were!

Everybody was talking about it quietly, with an undertone of fear. Artwork by Tufan Chakma. Used with permission.

The construction of the Kaptai Dam started a few years ago. I was surprised to hear that all the cultivable lands in our village would be submerged.

Maybe we would also have to leave this village and go far away. I couldn't comprehend this fully—what would drown, who was behind this.

One day I asked my father what was going on. Artwork by Tufan Chakma. Used with permission.

When I asked about it, my father sighed and replied, “far away from the town of Rangamati, the government was building a “goda” (meaning dam) at the mouth of the big river (Karnafuli).

All that was left was to install a gate on this dam. When the gate was closed, the massive stream of the Karnafuli would not be able to flow. As a result, the water level in all the rivers surrounded by the hills would rise. The low agricultural lands we depend on for our livelihoods would be submerged due to the rising water level.”

We became restless thinking about the future. Artwork by Tufan Chakma. Used with permission.

Our lives were threatened. Dad said if these places went underwater, we also have to leave this house, this village and this hill. Maybe we would need to migrate to the neighbouring country.

Many in the village still could not believe that the water of the dam would travel miles away and engulf our village. Although some landowners were given forms to start the process of applying for replacement land elsewhere, many could not decide what was the right thing to do.

When will the dam gate be closed? What would happen to us then? Artwork by Tufan Chakma. Used with permission.

It seemed that everyone had nothing thing to do except talk about this. When are they closing the gate? And we waited… and waited.

Still, so much work left! Arranging new places to take refuge, fixing boats to survive in the event of a sudden flood, securing our cattle, and whatnot!

We shifted to a new home built up the hill. Artwork by Tufan Chakma. Used with permission.

In the meantime, our father-in-law's house was moved. We shifted to a new home built up the hill, leaving the big house near the plains so that we would not sink into the water.

It had been raining all day and night. Artwork by Tufan Chakma. Used with permission.

At last, that critical moment came. I don't remember much about it (the date, time). It started raining just like a wet gloomy day in the rainy season. It rained all day and night. The water started to rise slowly. When a severe storm hit us, the water level rose swiftly, submerging everything under the water.

it seemed that the water had already reached our door. Artwork by Tufan Chakma. Used with permission.

I woke up in the morning and saw water and water everywhere. It was still raining. Everyone knew that the day had come. This time the water engulfed everything.

Everyone was trying to save their lives, taking refuge in unknown places. There was no time to think clearly.

Everyone was trying to save their lives.Artwork by Tufan Chakma. Used with permission.

Nobody had time to say goodbye to neighbours. Luckily, the boats had been arranged before. When the water rose, our relatives from downhill came to our house by boat. Following them, we reached Larma Para in Khagrachari District.

I did not have any news about my father and siblings. Artwork by Tufan Chakma. Used with permission.

I lost contact with my father and siblings. Many years later I came to know via a relative that my father, three brothers and one sister had all set off to Arunachal Pradesh in India after the event. There they were struggling hard just to survive.

My father had died on the way to Arunachal Pradesh. Artwork by Tufan Chakma. Used with permission.

I didn't even know then that my father had died on the way to Arunachal (sigh). Because of the Kaptai Dam, all our siblings were separated during the early 1960s. Some of us were able to reunite after two or three decades. This did not happen for all of us together. Maybe it will never happen as I am growing old.