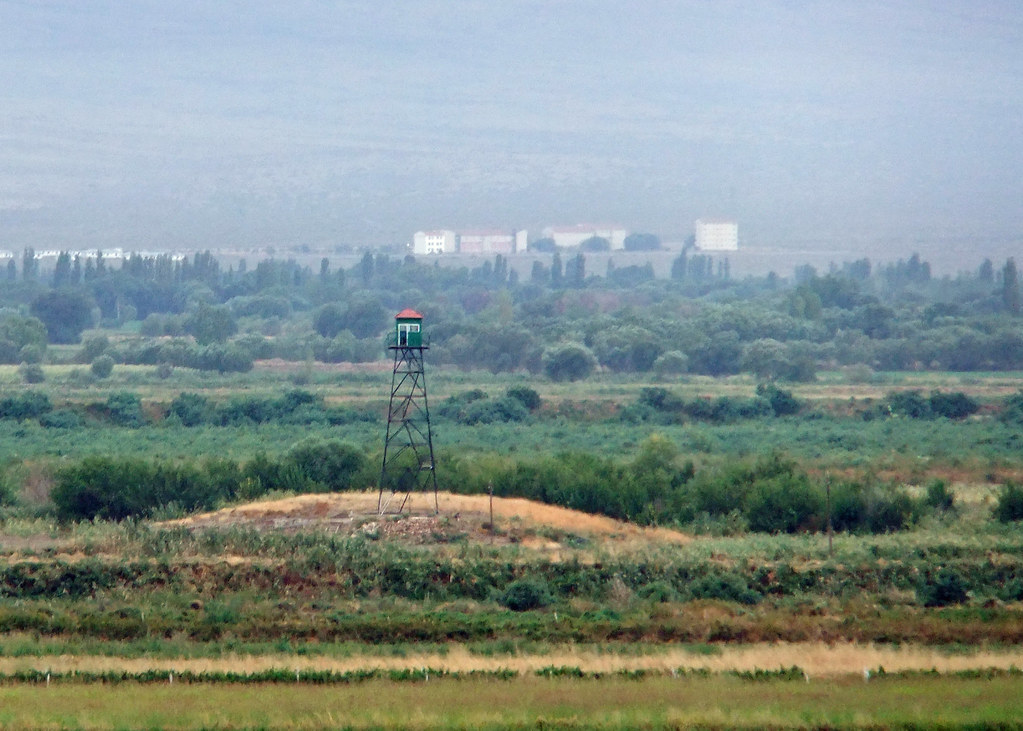 “The Turkish border” by Dumphasizer is licensed under CC BY-SA 2.0 [1]

Turkey closed its border [2] with Armenia in 1993 during the first Karabakh war in a show of solidarity with its long-time ally Azerbaijan. Almost three decades later, Turkey is considering reopening that border in the aftermath of Azerbaijan's victory in the second Karabakh war in 2020.

During Turkish President Recep Tayyip Erdogan's visit to Azerbaijan in December 2020, he said [3], “If positive steps are taken in this regard, we will open our closed doors.” A month later, an unnamed senior Erdogan advisor told [4] Turkish journalist Asli Aydintasbas that Ankara was ready to “normalize relations with Armenia.”

On April 24, 2021, during his meeting with Armenian Patriarch Sahak Maşalyan, Erdogan said [7], “It is time for us to lay bare that we as Turks and Armenians have reached the maturity of overcoming all obstacles together.”

“Everybody would win” if there were a broad regional settlement, Turkey's former Prime Minister Ahmet Davutoglu told [8] The Economist in May 2021.

“As a landlocked state, an open border and active trade could facilitate economic development and alleviate poverty in a country,” wrote [9] Hans Gutbrod, a professor at Illa State University in Tbilisi, and David Wood, a professor at Seton Hall University in a June 2021 piece for Foreign Policy. Adding, “Rapprochement with Ankara may also allow Yerevan to address its near-total dependence on Russia, thereby promoting greater regional stability. And Turkey would also benefit, especially through increased trade.”

Then in August, Armenia's Prime Minister, Nikol Pashinyan, said [10] the country was ready to strengthen ties with Turkey following positive signs from Ankara. The country's parliament approved [11] a five-year action plan, stating that Armenia was “ready to make efforts to normalize relations with Turkey.” While the plan was approved, it was harshly criticized by opposition lawmakers, according to reporting by Civilnet.am.

The goodwill intentions were also reflected [12] in Armenia opening its airspace to Turkish Airline flights en route to Baku.

On September 29, Turkey's Presidential Spokesperson İbrahim Kalınm told [13] one Turkish television channel, “In principle, we are positive about normalization with Armenia. The main reason why we ended our diplomatic relations and closed our border in 1992 was the occupation of Karabakh. With this problem resolved, there is — in fact — no obstacle to normalization with Armeni̇a.”

Turkey and Armenia were close to finding some common ground in 2008 when Turkey's then-President Abdullah Gul traveled [14] to Yerevan to watch the first of the two qualifying World Cup matches between Turkey and Armenia. A year later, Serge Sarkisian, the Armenian president, traveled to Turkey's province of Bursa to watch another football game between the two national teams. The game and Sarkisian's visit to Turkey followed the signing of a series of protocols [15] in Zurich that were designed to normalize relations between the two countries. Described at the time as “football diplomacy [16],” the negotiations eventually fell through after Turkey withdrew due to mounting pressure from Azerbaijan. Armenia formally declared [17] the protocols null and void in 2018.

Now, the chances of Azerbaijan interfering [10] are slim. “Before Armenia's withdrawal from this region, Baku saw Turkey's opening of the borders as a betrayal and harshly criticized it. Now, after the truce, this issue is off the table and it won't be a surprise to see a milder tone from Azerbaijan than in 2009,” said Ankara-based political analyst Hasan Selim Özertem in an interview with [10] Eurasianet.

In Armenia, there are differing opinions about how this new bilateral relationship may work out, according to journalist Ani Mejlumyan writing [10] for Eurasianet:

Most Armenian analysts and officials believe that Yerevan should pursue normalization with Ankara one on one, without Russia, Azerbaijan, or anyone else getting involved. Turkey, meanwhile, appears to be more interested [3] in pursuing normalization in the framework of its proposed “3+3” platform, a regional body made up of the South Caucasus states and their neighbors: Armenia, Azerbaijan and Georgia, plus Iran, Russia, and Turkey.

The role that Russia would play remains to be seen. Speaking at the New Knowledge Forum in Moscow on September 3, Russian Foreign Minister Sergey Lavrov said [18], “now that the war in Nagorno-Karabakh is over, there are grounds for unblocking the political process, transport, and economic ties.” In 2009, Russia openly encouraged the nation's “football diplomacy” and welcomed the signing of the Zurich Protocols.

However, there are also “moral dimensions” at stake, according [9] to Hans Gutbrod and David Wood:

To achieve more effective, mutually beneficial relations, both the Armenian and Turkish governments should work to reframe the Armenian genocide—and the wider suffering that accompanied the downfall of the Ottoman Empire—as a shared history. This is an inevitably long, emotionally strenuous process. For Armenia, it means shifting toward a diplomacy that invites Turkish society to engage—whether through exhibitions, travel, or academic and cultural exchange. Indeed, Armenian and Turkish societies have far more in common than what divides them. They may find the same in their histories.

One way to do this would be by focusing on individual actions and experiences rather than “collective castigations,” argue Gutbrod and Wood. They note that stories of those who stood in solidarity with Armenians remain largely untold, and perhaps now is the right time to bring those forward, to rebuild ties. But that would depend on both sides’ willingness. According [11] to the action plan adopted by the Armenian parliament in late August, the government of Armenia will continue to lobby “for world capitals to recognize the Armenian Genocide,” which would “strengthen the system of security guarantees of Armenia.” It may prove more difficult. Ruben Melkonyan, a Turkish studies scholar at Yerevan State University, thinks [19] Armenia may have to drop the genocide recognition now that the country is “in a weak position.”