Peter Telfer, the Trinidadian percussionist who made African drumming a church staple, goes to his Creator

'Peter's mission was clear and he never relented; is he fault we could do de ting now' 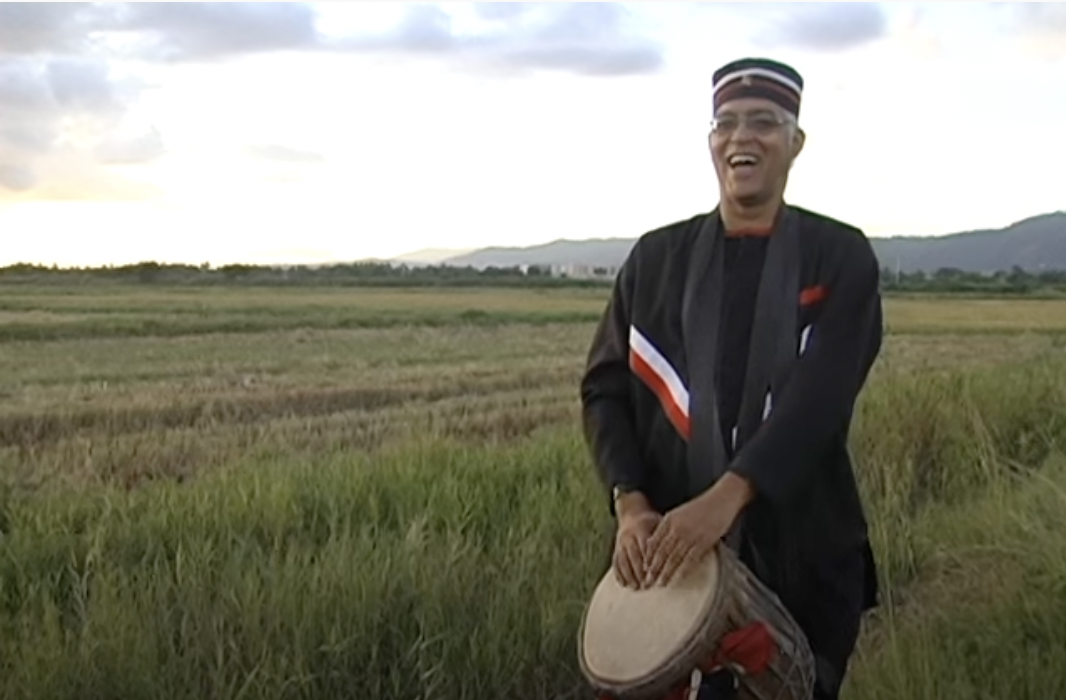 Trinbagonian musician Peter Telfer, who died on October 15, 2021. Screenshot taken from the music video for Kutunza Uhuru (Cherish Freedom) by Mawasi Experience on YouTube, from the album of the same name. Video by Elspeth Duncan.

Musician Peter Telfer, whose fiercely original and experimental percussive style moved a nation, is being mourned by Trinidad and Tobago netizens after his death on October 15. He had been admitted to hospital on September 30, after complaining of “pain and discomfort.” A music enthusiast from childhood, when he began playing with his lifelong friend, the exemplary flautist and saxophonist Dawud Orr, who passed away this past August, Telfer was a deeply spiritual man whose Roman Catholic faith was intertwined with every note he created. He was 63 years old.

As young men, he and Orr would play at various community events—they were just as adept at disco music as they were at soca, the newly burgeoning music genre—and they gigged at many Carnival parties. In October 1980, Telfer founded the band Mawasi Experience, into which he poured his love for music and merged it with his purpose-based faith. Yet, according to rapso performer Wendell Manwarren, who spoke with Global Voices by telephone, Telfer's music “didn't feel heavy,” preachy or overly religious. Rather, it felt spiritual. Describing him as “a true giant of a man and the definition of a patriot,” Manwarren remembers Telfer as “always being clad in red, white and black,” Trinidad and Tobago's national colours.

That unique combination of spirituality and cultural pride is an integral part of Telfer's legacy. In keeping with the Second Vatican Council, which began under Pope John XXIII in 1962 and ended under Pope Paul VI in 1965, there was a recommendation that the church should adapt to local cultures, “including philosophical and theological adaptation.” As a result, churches in Trinidad and Tobago began to welcome the participation of folk choirs, but Telfer led the charge in bringing the concept of African drumming into the celebration of the Catholic mass.

I cannot even begin to fathom the battles that Peter Telfer must have fought to get the African Drum & its Musics accepted by and integrated into the Catholic Church (and by osmosis-others). Also because his version of Drum Music was not neutered of African Revolutionary Sentiment and Civilisational Subversive Retentions…Yet he fought that battle-AND WON!!! He has a whole Liturgy with songs throughout the life cycle of Catholic worship. He was musical director in a major Port of Spain Convent! Drums are now everywhere in the Church. African music is everywhere. And all its children are inside the Church proper…

In a telephone interview, Patrice Cox-Neaves, who began her friendship with Telfer as a member of the folk choir at St. Theresa's Church on the outskirts of Port of Spain, described his work as “the wholeness of the music ministry” in the local Catholic church, saying, “Our music liturgy—for me, that was Peter.” She remembers him forever experimenting, making his own drums, and showing up to church with his “battery of instruments,” many of them made from local materials such as bamboo.

Of his numerous liturgical contributions, Telfer was probably best known for his inspired “O Creator,” a startling and spirited piece that most people heard for the first time on February 5, 1985, during then pontiff John Paul II's celebration of Holy Mass in Trinidad and Tobago's National Stadium as part of his apostolic journey to the Americas. Its bold and unapologetically exuberant percussive backbone was strong, joyous, and freeing, and got everyone in that stadium moving to a deeper rhythm while connecting to a higher source.

Facebook user Leslie-Ann Joan Boiselle called the piece “the beginning of the evolution of our liturgical music,” while Rubadiri Victor described the experience of hearing “O Creator” as “humanity attempting to talk to God”:

The song was that big, oceanic, and powerful. I could not get enough of it. Nothing else mattered for its duration. There was something so Ancient and Elemental about it. Direct. Heartfelt. Monumental. And Honest. After I met Peter and we became closer I could see how the song was very much like him… Honest. Direct. Fuelled by a deep innocent Faith. […]

It is a song I always have time for. I will stop what I am doing for it. In writing this testimony I searched online for a video for it and encountered none. I had just presumed for a song of such National importance that there would be a video that matched its Magnificence. I really should have known better. That song is a National Symphonic masterpiece. A work of prime indigenous skill. A Heritage Site. It should be declared as such and consecrated with a video that matches the song's scale and ambition. […] I would suggest that ‘Oh Creator’ deserves a video worthy of its status as a National Spiritual Symphony, and it should be done as one of the many things to pay Tribute to Peter…

Archbishop Jason Gordon expressed his own connection with the song:

I remember the first time I heard ‘O Creator’ […] in a liturgy. […] It woke me up because here you had this rhythm and this chant, and this music that was so different from others that we've had and experimented with in the church, and it was us. It was our rhythm, it was our chant, it resonated with us, a Caribbean people. That's Peter's gift to us as church.

Despite the unavailability online of what is arguably Telfer's magnum opus, he did record several albums over his long career. Vocalist and musician Raymond Edwards worked with Telfer on some of his more recent offerings. In a telephone interview, he described Telfer as “the big brother of musicians, always looking out for you and ready to offer support”:

Peter was a loving, giving, genuine—and Catholic–musician. His faith was intricately intertwined into the fabric of who he was. I always wanted to ask him where he got his passion from—for church, for mentoring others, for country. The dynamism of the musical liturgy was directly connected to his own dynamism. He wore his love of country on his sleeve—literally—and he wore it well.

Peter's drumming was responsible for so many drummers pursuing the art form. I must say that Peter was revolutionary in that he straddled and bridged the gap between ‘hardcore’, accepted Catholic, charismatic renewal musicality (organs and the young people ‘box guitar’) and the rebellious African drums/'trapset'…Often times all percussionists were given ‘the eye’ or forcefully told to tone down the drums. Nevertheless, Peter's mission was clear and he never relented through the 40+ years of the Mawasi Experience. Is he fault we could do de ting now.

As with so many talented people here, I believe he was not valued enough and often misunderstood. But he trodded on…

Upon hearing of his passing, online tributes began to pour in from friends, admirers, and cultural enthusiasts who spoke of his selfless devotion, passion for service, and skilful musicianship.

I will always remember Peter Telfer as the kindest, gentlest soul I ever knew […] he was so passionate about his drumming and the Mawasi Experience and you just got caught up in that joy and warmth. Trinidad is a little less today for his loss.

Telfer's niece shared both family photos and videos of her uncle's performances, while his cousin, Jason Jones, remembered his musical legacy:

Peter was well known and loved for his tremendous work in the field of music and especially African drumming and elevated the humble drum to performances before many distinguished audiences around the World. […] Rest in peace dear Peter. You have served your country and your community with distinction. ?? ❤️ ?? ?

Speaking at Dawud Orr's funeral service earlier this year, Telfer revealed that the two things that meant the most to him in his own life were music and service. Addressing Orr, he continued:

You didn't always believe in what I believe, but you believed in us as [friends] and [in] Mawasi, and you supported. You were there. You made time.

Trinidad and Tobago is better for Peter Telfer having been there and making the time.