A former investigative reporter was arrested for criticizing the film 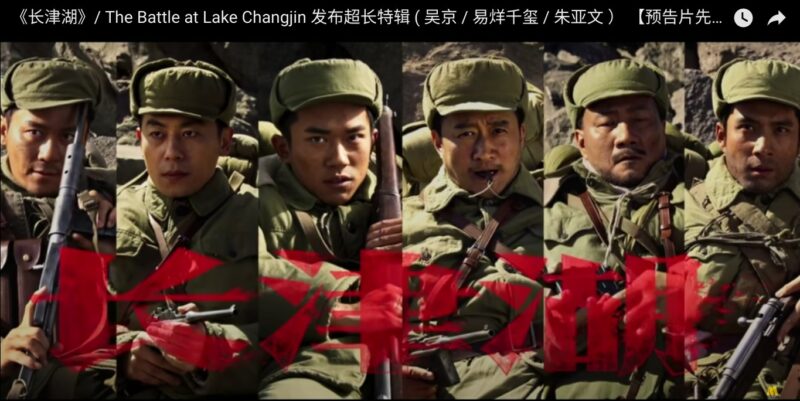 A screenshot from the official “Battle of Changjin Lake” trailer on Youtube.

The film was released as part of the 100th Anniversary of the Communist Party of China. With a 200 million US dollar production budget, the movie is co-directed by award-winning filmmakers Chen Kaige, Hark Tsui, and Dante Lam and stars top actor Wu Jing.

The film was released on China's National Day, and mainland Chinese box office earnings passed 4 billion Chinese Yuan (600 million US dollars) in less than 10 days. The film tells a story of the Chinese Volunteer Soldiers’ self-sacrificing heroism which helped them dramatically defeat the US army in the battle of Chosin Reservoir.

The battle of Chosin Reservoir

The battle took place between November 27 and December 13, 1950 — one month after former Chinese leader Mao Zedong officially entered the Korean War. The three-year war between the Soviet-backed North and United Nations-backed South Korea was triggered after North Korean military forces crossed the border and entered South Korea on June 25, 1950.

Under the slogan “resist the US in support of Korea” (抗美援朝), Mao ordered the Chinese liberation army to attack the United Nation troops, which was composed mainly of US forces, in North Korea to prevent the unification of Korea under capitalist forces. To avoid declaring war against the UN and US, the Chinese troops were dubbed the “People's Volunteer Army (PVA).

About 3 million Chinese civilian and military personnel served in the Korean War.

During the war, 120,000 Chinese soldiers from the PVA's ninth army were sent to the battlefield in the middle of winter to attack 30,000 United Nations troops in Chosin Reservoir.

The Chinese volunteer army was so poorly equipped that tens of thousands froze to death as the temperature in the Chosin Reservoir reached minus 30 degrees Celsius. According to official Chinese reports, the army recorded 48,156 casualties during the battle, with nearly 29,000 being non-battle-related deaths. As for the UN troops, they lost 17,843 lives, with 7,338 killed by the brutally cold weather. However, the latter managed to retreat and eventually evacuate 98,100 refugees and civilians who wanted to escape the Soviet-backed military regime out of Northeastern Korea, a region surrounded by the Korean People's Army (KPA).

The choice of the battle as a patriotic propaganda film is controversial, as the Korean War was an incredibly painful period for both China and Korea. It is estimated that North Korea and China each lost between 200,000–400,000 soldiers while the South Korean army lost 162,394 and the American army lost 36,574 lives. The Soviet Union air force lost 335 planes and 299 lives.

China's intervention in the Korean War was largely controversial until recent years as the war caused huge causalities on all sides. More than 3 million Korean civilians died in the war. As pointed out by Adam Ni from Chinese political news analysis site, the battle Chosin Reservoir was considered a “failure at massive cost”:

even before the battle ended, already handed in to Party Centre a doc titled “9th Army Group self-criticism on the battle on the eastern front”, saying that it was a failure at massive cost.

Today, this failure is celebrated.

However, in China today, reflecting on the war can have grave consequences. Former investigative reporter, Luo Changping was arrested for “infringing the reputation and honor of national martyrs” after he wrote the following comment on Chinese social media:

After half a century, people in this country seldom reflect on the cause of this war. The situation is like the frozen troops back then, they did not question the “acute decision” from the above.

While most negative comments about the movie and critical comments about China's intervention in the Korean War have been suppressed and censored, patriotic messages spread on social media. One netizen @fangshimin placed two video bloggers’ so-called “personal” interpretations of the film together to demonstrate the propaganda authorities’ effort to advocate for a “hot-blooded” (血性) patriotism, which means a willingness to fight for the country:

Here come the propaganda script of “the Battle of Changjing Lake”

It is common to see pro-Chinese government bloggers spreading authorities’ talking points. One notable example was a flood of video clips on Uyghurs’ life in Xinjiang. Investigative journalists pointed out that the so-called experience shared by over a thousand Uyghurs was taken from an identical script, which suggested that the videos were part of a coordinated influence campaign. The netizen @fangshimin believed bloggers were using the same tactic when discussing the patriotic movie — both bloggers said that they had a grandpa who fought in the Battle of Chosin Reservoir and that history shows that it is necessary to suppress feminine masculinity and the fandom culture. The Chinese government recently launched a communications campaign to suppress “sissies” and fan culture. Below is the partial translation of the script:

… “If we don’t fight this battle, our next generation will have to fight this.” This line in the movie stays in my brain. If our young generation is more “hot-blooded” and has more knowledge about history, they would not visit Yasukuni Shrine [in Japan]… Now, we have meat to fill our stomach, but we have lost our spirit. Just imagine in the battlefield, the American soldiers were having their turkeys to celebrate thanksgiving, our warriors only had frozen potatoes. The young people in the 1950s were like this: in such brutal cold weather, with such backward equipment, they had created a miracle that shocked the whole world. All because they wanted to protect their homeland… Hence, I support the crackdown on sissies and fandom culture. This would help us to rebuild our martial spirit. We need this in our life and work. This [protecting the homeland] is not the soldiers’ duty, but the whole society should take up the duty…

The film has also triggered an editing debate on Chinese Wikipedia. William Long, a prominent tech blogger, noted that some Wikipedia users are continually attempting to edit the original entry of the Chinese term the Battle of Chosin Reservoir (長津湖戰役) to suggest that China gained a “decisive victory” in the battle, while others disagreed given China lost tens of thousands of lives in the battle and failed to eliminate the UN troops.

New York Times reporter, Evan Hill, notes that outside China, the space for critical deliberation on history is also shrinking because Hollywood has been self-censoring their production for the sake of gaining profit in the China market:

It's very funny that Western cinema won't do anti-China nationalism because Hollywood desperately wants the money while the most popular film in the world is going to be about Chinese chads defeating Americans in the Korean War https://t.co/y7y8vMuPs0