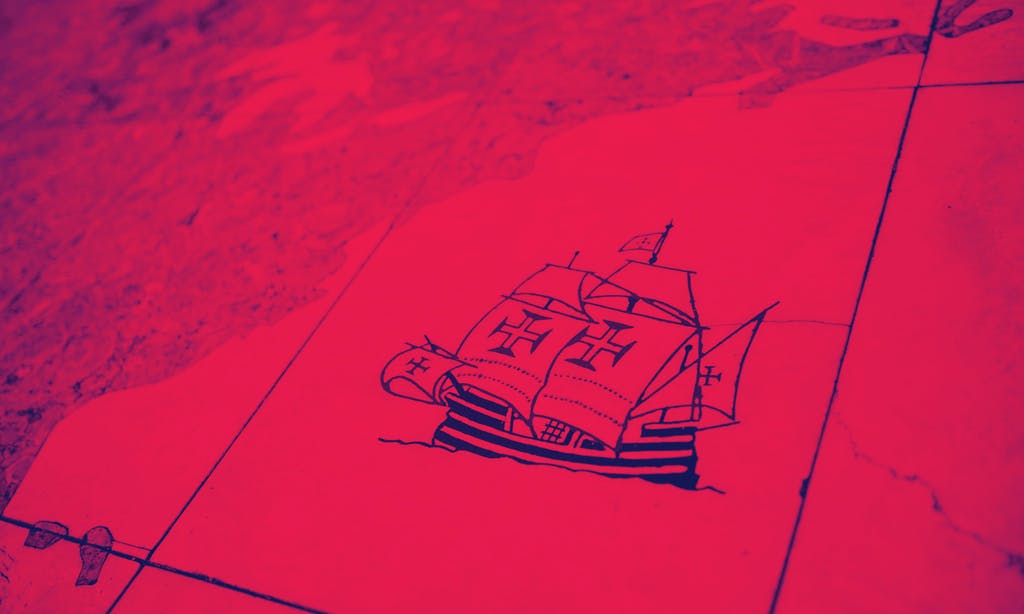 Image based on a photograph by Bruno Martins [1] (via Unsplash)

This article by Ruth Correia was first published [2] on The Interruptor in Portuguese on May 28, 2021. An English translation has been republished here under a content partnership agreement and has been edited for length and clarity.

Colonialism and imperialism are complex political structures that presuppose domination over other peoples and territories. In the case of European colonialism, which naturally includes the Portuguese, the belief in cultural supremacy over the native population was also explicit.

The Portuguese occupation of overseas territories, as well as their exploration, were not homogeneous events. Colonialist exploitation had periods of greater and lesser intensity, but the constant throughout history was that it was a major engine of the Portuguese economy since the early 1400s.

Until the end of the 19th century, Portugal mainly occupied portions of the coastal strip in territories that today correspond to the countries of Angola and Mozambique, with little control over the interior. It was only in 1885, at the Berlin Conference [3], that the European colonial powers defined the borders of each territory, dividing among themselves a continent that did not belong to them.

Arrival, occupation and disengagement of territories

Led by Infante D. Henrique [4], Portuguese maritime exploration began in the 15th century. This undertaking was justified by the missionary nature of Catholicism, which would also guide the incursions into North Africa in the 15th and 16th centuries. His aim was to see how far Muslim rule extended. The conquest of Ceuta, one of the Spanish port cities on the northern shore of Africa, in 1415 was the official start of hostilities.

Although the Portuguese discovered multiple territories during their expeditions, it is worth distinguishing between discovery and reach. Beyond Cape Bojador, the “discovery” was fundamentally cartographic, since the existence of land beyond that point was already known. The fact that a significant part of the colonized territories was inhabited when the sailors arrived there indicates that this idea of ​​discoveries is a Europeanized narrative—someone already knew that those lands existed, the Europeans had not yet arrived there. In this sense, by way of example, the Portuguese were the first Europeans to set foot in Japan (1542–1543).

In a way, what was truly discovered were new paths.

Portugal was slow to exit the colonized territories. With the exception of territories that were conquered by other colonial powers over the centuries, such as parts of Sri Lanka and Malaysia, this exit began in 1822 with the independence of Brazil and only ended in 1999, when Macau returned to Chinese sovereignty—about 450 years after the Portuguese first arrived at the peninsula. While countries like France and the United Kingdom still maintain the administration of small overseas territories spread across the globe, of all European countries, Portugal took the longest time to recognize the independence of occupied territories.

It is true that slavery already existed both in Portugal and in Africa long before the maritime expansion. There are two characteristics that distinguish the Portuguese operation from other countries: 1) the industrialization of the process through transatlantic trade and 2) the introduction of a biological factor when selecting which people would be turned into merchandise. Skin color came to dictate who was free and who was a slave.

Human trafficking during the expansionist period officially began in 1444, when 235 people were captured in West Africa, brought to Portugal, and sold into slavery in Lagos. Among the colonial powers that emerged over the centuries of European colonialism, Portugal trafficked the most enslaved people.

The idea that Portugal was the first European country to abolish slavery is false, starting with the fact that this abolition was a process rather than an event. The decree of the Marquis of Pombal published in 1761 prohibited only the importation of slaves into the metropolis. The statesman's vision was, however, advanced in the European context at the time. Two years later, by introducing the Lei do Ventre Livre, which dictated that children of slaves be freed at birth, the end of slavery in Portugal was a generation away, at least on paper. Confined to the metropolis, these regulations had little or no effect in the context of the colonial empire, as the route of most abducted people was from Africa to the Americas.

Major legislative upheaval would only come about a century later with an initiative by Bernardo de Sá Nogueira de Figueiredo, better known as Sá da Bandeira. In 1836 he approved the abolition of the slave trade “in the Portuguese colonies south of the Equator.” The real slowdown of the massacre only came in the second half of the 19th century: between 1750 and 1850, Portugal and Brazil trafficked almost four million people.

Despite the clear advances in Sá da Bandeira's laws, the disarticulation of the abolition of slavery with any type of social support meant that the new freedmen kept their socio-economic condition profoundly fragile, as they did not hold property, income or, often, not even personal support networks. Likewise, the introduction of the Lei do Ventre Livre in all territories of the Portuguese monarchy in 1856 led to the forced separation of children from their mothers, who were still considered property. The children of slaves could remain in their mother's custody until the age of seven, but after that, they were left to their fate.

Despite these laws, the forced labor regime lasted until the 20th century in territories colonized by Portugal. The regime was ensured by the native populations and was successively legitimized by the Portuguese State. In 1897, the Indigenous Labor Regulation required enslaved people to “seek to acquire work” and, in the event that this did not happen, it was up to the State to “enforce compliance with them." This was reinforced after the establishment of the republic, in 1914, with the General Regulation of Indigenous Work in the Portuguese Colonies. In this framework, the moral obligation to work could be divided into three types:

In 1929, the Civil and Criminal Political Statute of the Indigenous Peoples of the Colonies of Mozambique and Angola, legitimized the differentiation between settlers and natives, explaining that "Indigenous people could not be assigned rights related to constitutional institutions." This segregation would be reinforced by multiple decrees, throughout the period of the Estado Novo [5].

In 1953, the Organic Law of the Ultramar [6] removed the term “colonial empire,” but kept forced labor. This document reads that "the State can only compel indigenous people to work in public works of general interest to the community, in occupations whose results belong to them, in the execution of judicial decisions of a criminal nature or to comply with tax obligations."

In the last centuries of its empire, the Portuguese State assumed itself as a benevolent protagonist of colonialism over the African peoples, but it was in the exploitation of labor that the greatest tool of its “civilizing mission” lay. In 1962, after field observations, researcher Perry Anderson stated that “the most notorious aspect of Portuguese colonization in Africa is the systematic use of forced labor."

The Estado Novo, colonialism and war

The exaltation of colonialism as national glory was one of the ideological marks of the Estado Novo. Anchored in Gilberto Freyre's Luso-tropicalism, a theory that, in the words of historian Cláudia Castelo, granted “the Portuguese a special capacity to adapt to the tropics, as a result of their desire for mestizaje, for the interpenetration of cultures and for ecumenism.” Furthermore, he saw in Portuguese colonialism a natural benevolence, derived from its “fraternal Christianity," and attributed to the Portuguese peoples and other colonies (including Brazil) a spirit of cultural unity.

In 1961, an attack claimed by the MPLA [7] on the Luanda prison triggered a series of events that started the colonial war, or war of liberation, for African libertarian movements. The war would last until April 25, 1974, and its end was the main motivation for the military revolt that would overthrow the dictatorship, resulting in the Carnation Revolution [8]. But the Portuguese did not fight alone: ​​between 1961 and 1973, the Portuguese Armed Forces recruited thousands of African soldiers, integrating them into its contingents, and working hard in anti-subversion efforts.

The war effort for Portugal had an impact on multiple levels: About 90 per cent of the young male population was mobilized for war, intensifying a wave of emigration that would only slow down after democracy was implemented. In the occupied territories, the massacres lasted until the end of the war. After the withdrawal of Portuguese troops, several countries plunged into civil wars, but it is important to underline that the liberation struggle of the African peoples against Portuguese colonialism was the greatest catalyst for the end of fascism in Portugal.

The colonial war caused around 10,000 deaths and 20,000 invalids among Portuguese soldiers and over 100,000 victims among African civilians. The trauma lasts until today for thousands of Portuguese, Africans and their descendants. Hence, the space of joint memory of the colonial war is advanced by some specialists, such as Miguel Cardina [9] or Fátima da Cruz Rodrigues [10], as a field of reconciliation between peoples.