COVID Couture: Trinidadian creative Sonja Dumas responds to the pandemic with a feel-good dress that has a deeper meaning

'A small act of humorous protest and liberation' 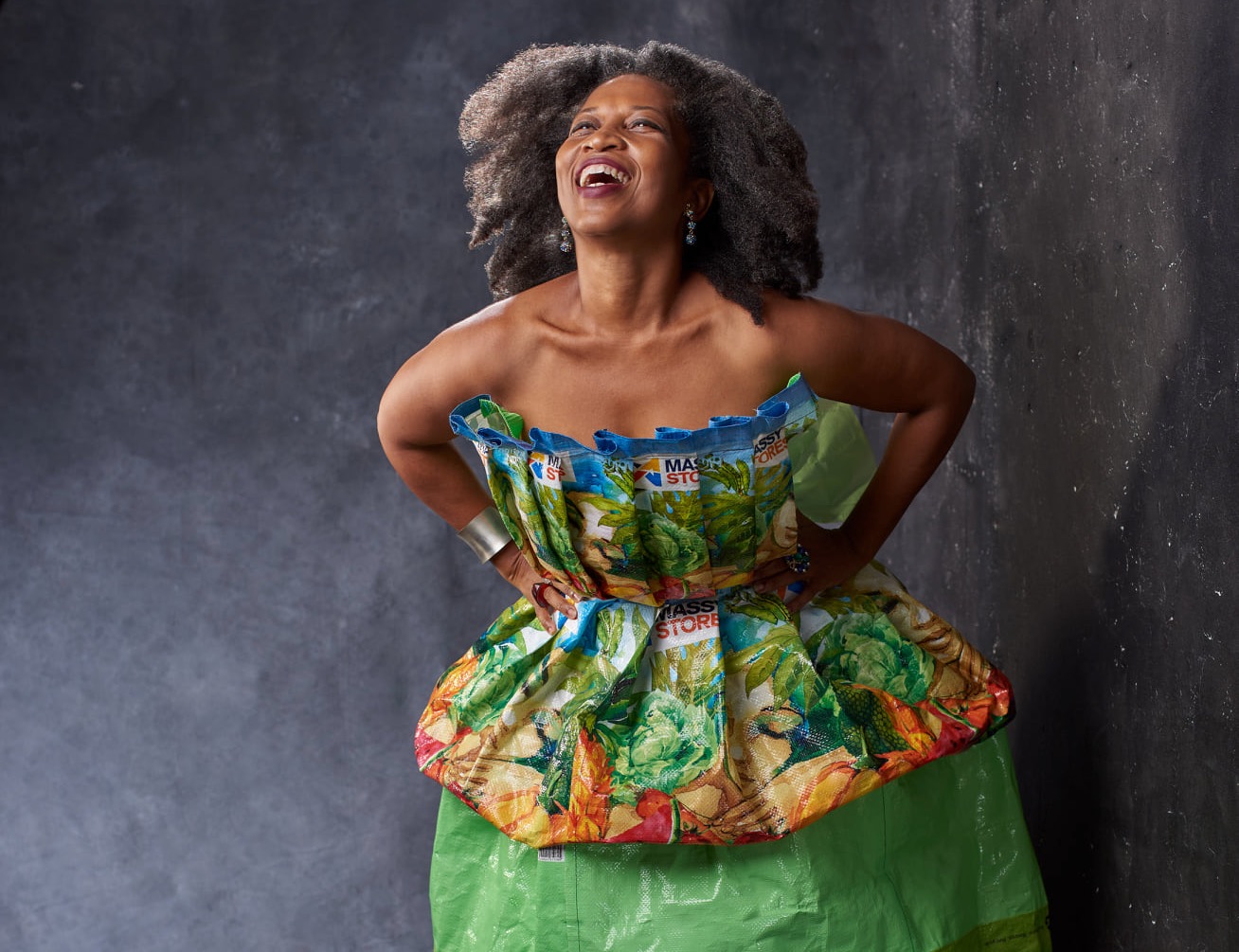 In response to the COVID-19 pandemic, Trinidad and Tobago has had several stay-at-home orders, curfew impositions and restrictions on gatherings, with limits on the operations of non-essential businesses. Supermarkets and grocery stores, however, have been a constant, with food-shopping giving people a genuine reason to leave the house—but with beaches still closed, COVID-19 cabin fever has been getting to many netizens. One of them—dancer, choreographer and filmmaker Sonja Dumas—decided to counteract the COVID blues with creativity.

In a September 27 Facebook post, Dumas uploaded several professional photographs of herself, decked out in a colourful gown made entirely of reusable shopping bags and branded with the logo of one of the Caribbean region's largest supermarket chains, Massy Stores, explaining:

Who says I doh dress up and go on hot dates in de pandemic?

I was thinking about this situation we're all in and where to find the humour in it. […] I decided to go haute couture (not). I'd been planning it since April, when we went into the second major ‘lockdown’. Everyone's style was seriously cramped – again. But safety first. Grocery and pharmacy second. In my lethargy and my feelings of being overwhelmed by this whole world crisis, it took me months to even draw the design, far less get the dress made. But it happened.

The post struck a chord with social media users, who found it refreshing, imaginative, and a welcome break from discussing infection rates and vaccine hesitancy. I suspected, however, that like most creative endeavours, Dumas’ dress display operated on multiple levels and I wanted to find out more. Via telephone and email, she offered deeper insight into what inspired her to take on the project and the message she hopes it will send. 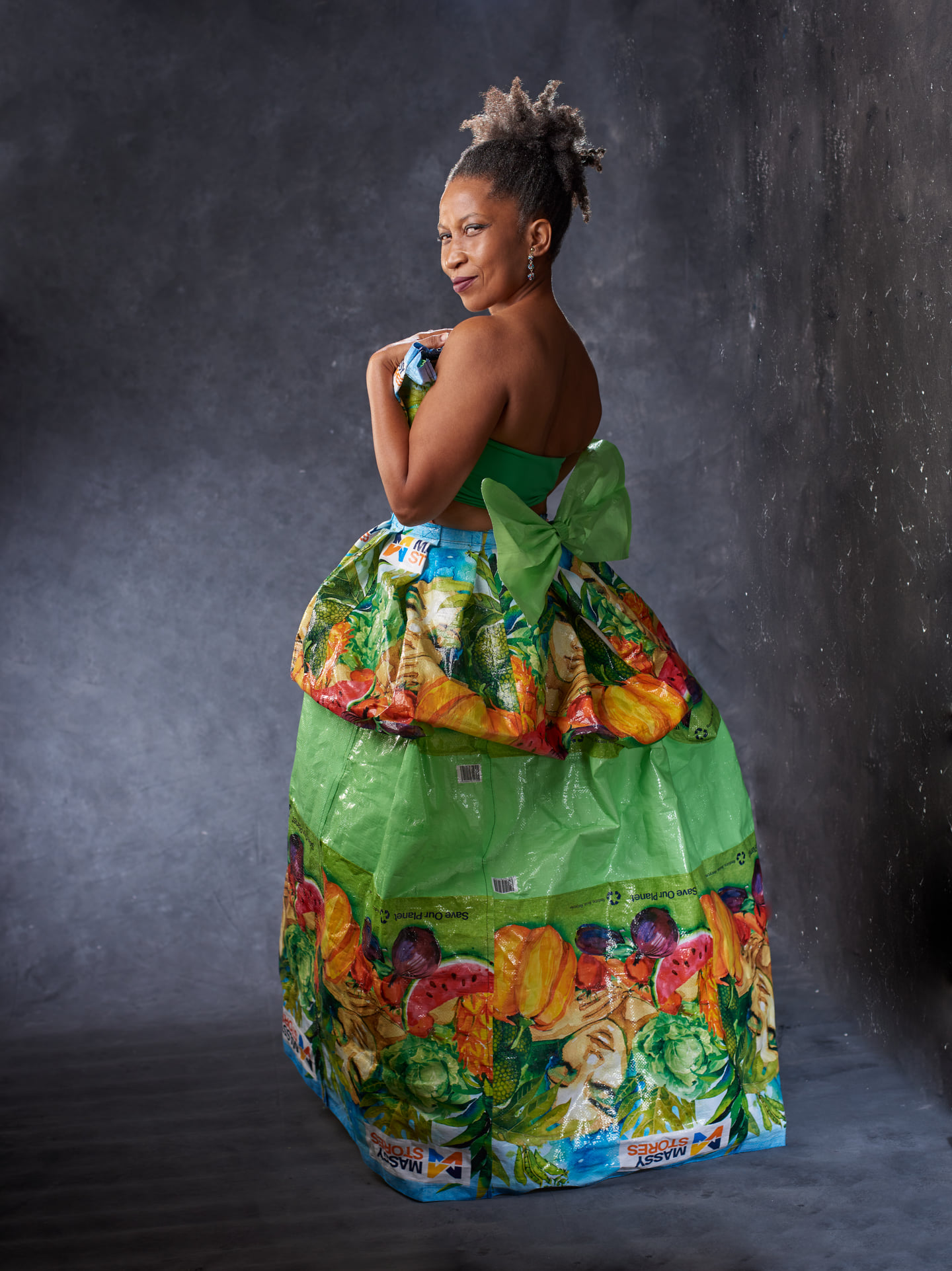 Sonja Dumas, ready for her ‘hot date’ to the grocery. Photo by Michele Jorsling courtesy Dumas, used with permission.

Janine Mendes-Franco (JMF): What was the genesis of your grocery bag dress idea—and what made you pursue it all the way through to a fashion photo shoot?

Sonja Dumas (SD): When Trinidad and Tobago went into its second major lockdown back in April, it was a very necessary move on the part of the government, but a very tense moment for the population. The number of daily COVID deaths had increased significantly and the virus was spreading, as well as the fear of it. It felt as if we were back to Square One, or maybe even negative Square One. As the lockdown persisted, I grew increasingly frustrated with the isolation and the inability to do what I considered ‘normal’. As a person in the creative sector, it was doubly frustrating because much of my income also dried up. My life outside of home and temporary work spaces was centred around visits to the grocery, the gas station and the pharmacy. Those became what I call my ‘hot dates’ – the opportunity to be social – if only to mutter ‘Good morning’ or ‘Good evening’ to the security guard stationed at the door to ensure that I sanitised and took my temperature before entering the building.

JMF: Take me through the creative process. Did you design and sew it yourself? What was involved, how long did it take, and how did its scope expand?

SD: I designed the dress in my head first. I knew exactly what I wanted it to look like but took months to actually draw it; it wasn’t really a priority. Strangely, I was even more busy with Zoom meetings and backlogs, even though there was less paying work. The dress continued to be just a cerebral protest about what my life had come to. But I knew other people were suffering from the same isolation, uncertainty, sadness and general feeling of being overwhelmed, and I thought that the dress might help to cheer us all up.

I finally made a couple of sketches back in July or August, and then took it to a seamstress who does many of the dance costumes that I design. She’s a brilliant craftsperson, as well as an amazing interpreter of my designs, and she knows how far out of the box I often think. I placed the sketches and the Massy bags on her sewing table. There were 7 big ones and 4 small ones (although not all were eventually used for the dress). She didn’t flinch. All she said was, ‘Costume?’ I grinned and said, ‘Yes’. We spoke for five or ten minutes, and that was that. A week later, I returned to collect the quirky evening dress that I planned to post on social media as a small act of humorous protest and liberation.

JMF: So was it all feel-good fashion in the midst of a tough time or was there a deeper sub-text?

SD: I would say it was more of an exercise in preserving mental health and wellness which would hopefully make others feel good too. I revel in the process of conceiving an idea, birthing it with labour pains and all, and bringing it to fruition. The care, the love, and the dedication in that is something that energises me and makes me feel as if I’ve reached the highest form of my human and spiritual self. One needs that – especially in times of great challenges.

JMF: The bags, visually arresting thanks to their colour and sheen, are also somewhat of a symbol of this pandemic. Food is essential, but it has become more expensive. Are you commenting on social equity, food security, even stewardship of our environment via the upcycling of the bags? Are these things we should be thinking about?

SD: The colourful nature of the bags was definitely something that I considered, but it was more about the ubiquitous nature of the bag and that fact that it symbolised access to food and, in a pandemic, access to very little other activity. So the dress is definitely a statement about our pandemic situation. I don’t think that I would have thought about making it if we weren’t facing this cataclysmic shift in lifestyle, access and human relations.

But food security is definitely one of the things we should be thinking about. While I’m grateful that there’s a way for most of us in Trinidad and Tobago to purchase food when we want it, I’ve been appalled at some of the prices that I’ve seen in the past few months. I know that things are tight for everyone in the wholesale-retail chain, but food shouldn’t be made more expensive in these times. There still are too many people who are struggling to put food on their families’ tables every day. I’m blessed that I don’t fall into that category, and I count my blessings every day, but I know that the situation could change unexpectedly for me or anyone else on this fragile planet. 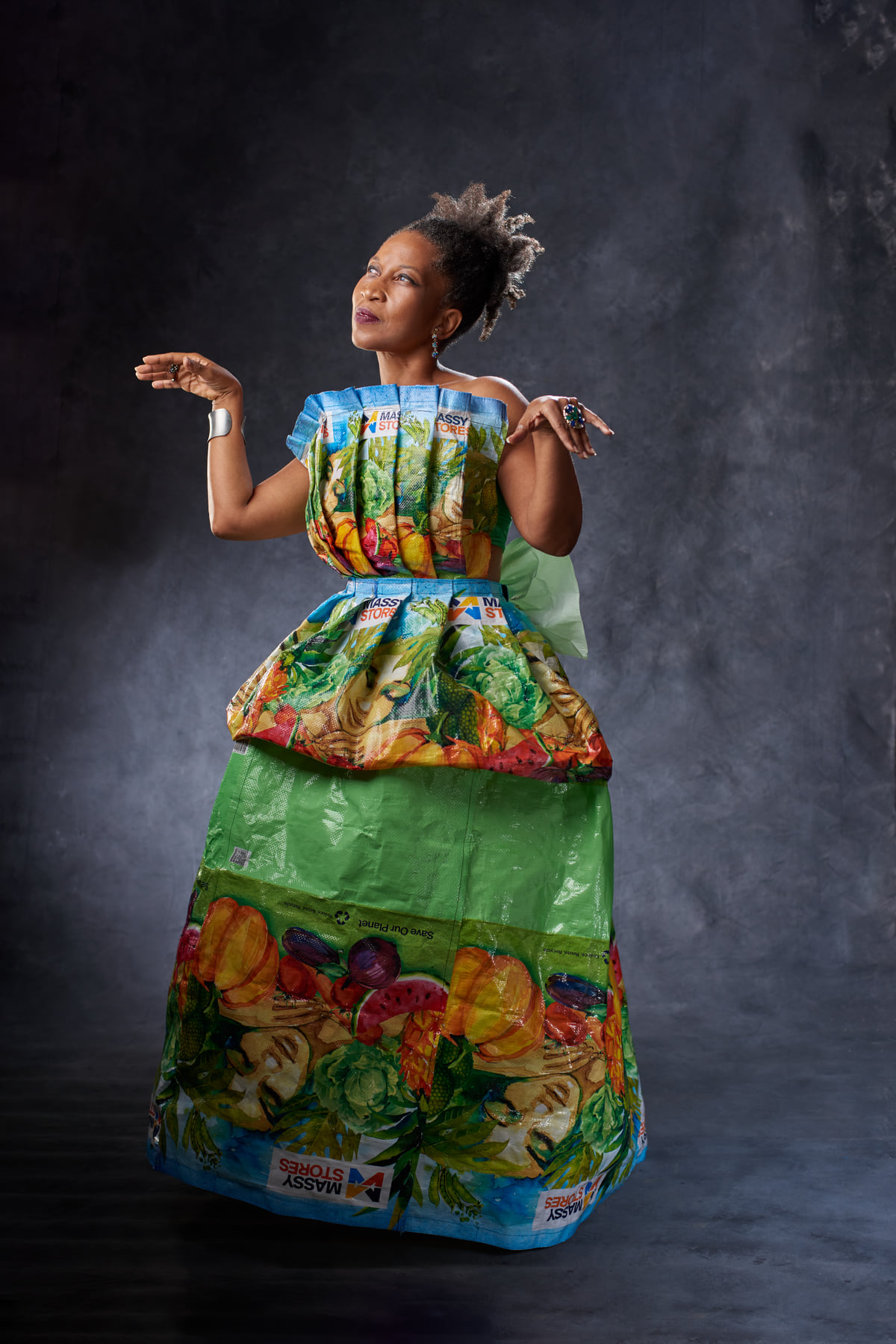 JMF: How did the photo shoot factor in?

SD: I was initially planning just to do a series of selfies and post it on Facebook and Instagram, but then a random opportunity arose for me to get the shoot done at the studio of the incredibly talented Michele Jorsling. I had to do another photo shoot there […] and I asked if she could spare some time to take just a couple of shots of me in the dress [afterwards]. She obliged, and that’s how this amazing shoot happened.

JMF: The whole feel is very Caribbean, invoking the region’s dance traditions through the dress’ wide skirt—like that of a Bélé dancer—and your cheekiness in the photos echoes that vibe. The design is also a nod to Trinidad and Tobago’s Carnival spirit—the idea of dress-up and disguise—which the pandemic has deprived us of.

SD: Yes, I was definitely conjuring up the coquettishness of some of our African-Caribbean dances, which tease and also challenge through movement, gesture and look. I thoroughly enjoy using those devices; it’s part of playing the masquerade of the message. And the design of the skirt is certainly a nod to the voluminous, patterned bélé over-skirt.

This dress is definitely along that performative ‘dance and mas’ spectrum. I hope that it is considered a mas! Because isn’t mas supposed to delight, provoke and intrigue? Earlier this week, a cutting-edge traditional Carnival costume designer reached out to me to talk about possibilities of a digital collaboration, using recycled materials, which is right up my alley. You just never know where your little rant in your little dress will lead you.

JMF: How would you describe the essence of a Caribbean woman through this dress?

SD: I’m using this word a lot these days, but ‘resilient’. It speaks of confronting one’s fears and conquering some of the anxiety, and of using humour to lift oneself up – as a woman, as a human. I’ve always thought of myself as an intense person with strong opinions and a sense of justice and fearlessness. […] I thought I had reached my zenith with all of that. But then, in the face of the pandemic, I’ve found a new font of mental and spiritual strength to cope with what has come my way in the last eighteen months. It speaks to a kind of self-reliance that the Caribbean woman knows she has, deep down inside. What’s different now is that in my isolation, I’ve had to time to think about how this new level of resiliency shapes my life, and what I’m going to do with it going forward. It’s scary and it’s beautiful at the same time.

JMF: These images say to me that there’s beauty and excellence to be found in even the most mundane of things if we approach it with the right frame of mind. Is that the secret to making it through this pandemic? Critical thinking with a dash of humour?

SD: I think that's a really good way to look at it. But don’t forget the healing factor. As much as the dress might capture the attention of someone who sees it because of its unusual nature, and as much as it raises big world questions like the future of food security, there is a more personal intent behind it. I made it to cheer up myself and others at a depressing and challenging moment of our human history. It’s a suggestion of how we could craft our own healing—at least some of the time—with, as you say, mundane objects. So one major message is that you don’t have to look too far or spend too much to create something that lets you vent and makes you smile at the same time. Use the objects in your environment and heal yourself through your own creativity.