Jamaica’s rivers and gullies are suffering from abuse

Often used as garbage dumps, like the gullies, Jamaica's rivers are in trouble 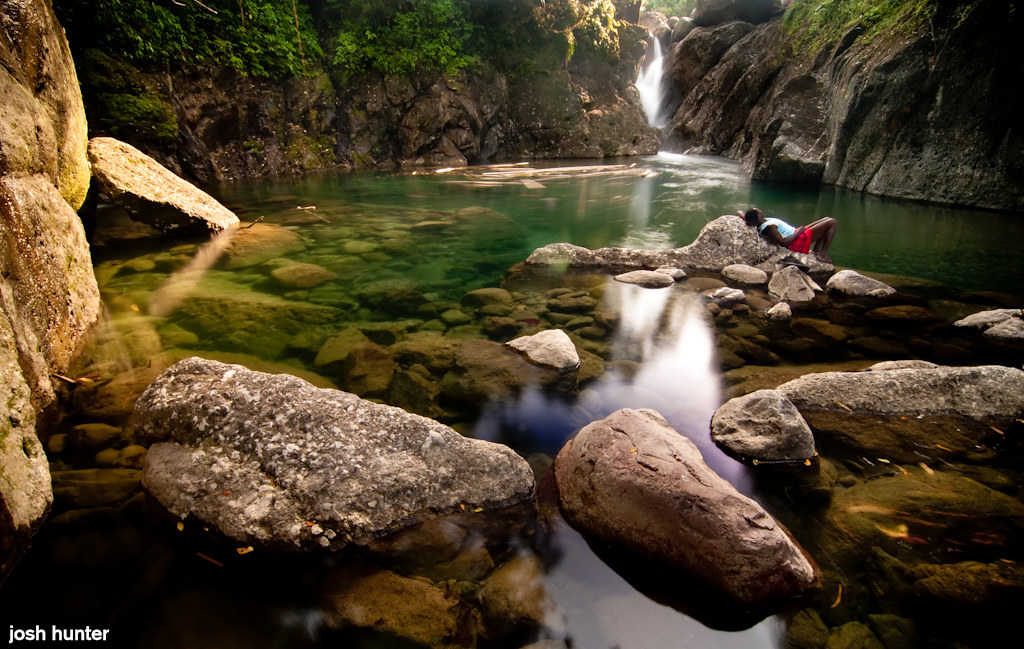 This post was originally published on Petchary's Blog. An edited version appears below, with the author's kind permission.

World Rivers Day, observed annually on the fourth Sunday in September and founded by the long-time river advocate Mark Angelo, strives to increase public awareness of the importance of rivers, and encourage better stewardship of all rivers.

In Jamaica, rivers are temporal creatures—some may disappear for months or even years because of drought, or transform into unruly torrents during heavy rains by breaking their banks and causing flooding. Some rivers, especially those adjoining mangrove swamps, seem to remain constant, at times dark and sluggish, at others, crystalline.

The theme of this year’s World Rivers Day, urban waterways, is not a happy topic for Jamaica. In Kingston, Montego Bay, and many smaller coastal towns, waterways take the form of gullies. Often festooned with garbage, they are ugly spaces where anything—or anyone—might be lurking. Residents look at them quickly as they drive over them, then turn their eyes away.

In 2016, the Jamaica Environment Trust (JET) published a report entitled “Garbage and the Gully,” specifically focusing on the heavily polluted South Gully in Montego Bay. They recommended a slate of actions, including regular cleaning and garbage collection, public education targeting local businesses communities and enforcement of existing environmental laws.

JET also partnered with the Tourism Enhancement Fund, Montego Bay Marine Park and Yaadie Environmental Conservationists to design, construct and test a debris containment boom at the mouth of the South Gully as part of the country's 2014/15 Clean Coasts Project. Each time it was cleared, approximately 50–100 pounds of garbage—mostly plastic bags and plastic bottles—was removed. However, there were challenges with managing and maintaining it, and it became too labour-intensive and costly to continue.

A 2010 study estimated that approximately 25–30 per cent of Jamaica’s garbage is improperly disposed of, often ending up in gullies, drains and rivers, which empty into the sea. No less than 16 gullies empty into Kingston Harbour. After heavy rains, hundreds of plastic bottles bob around in the water, washed down with all kinds of other debris—including bags of human waste—from the gullies into the long-suffering harbour.

The Ministry of Local Government is responsible for maintaining and cleaning the gullies. In March, Minister of Finance Nigel Clarke announced a 320 million Jamaican dollar (2,164,650 United States dollar) gully-cleaning project for Kingston called the “Gully Intervention Programme.” It would have, among other things, involved the training of community members as environmental wardens, but the initiative has been delayed because of budgetary constraints imposed by the COVID-19 pandemic. In a similar vein, executive director of the National Solid Waste Management Authority (NSWMA), Audley Gordon, observed in a recent television interview that the planned 100 new garbage trucks will not arrive any time soon, as there is now no money for them. 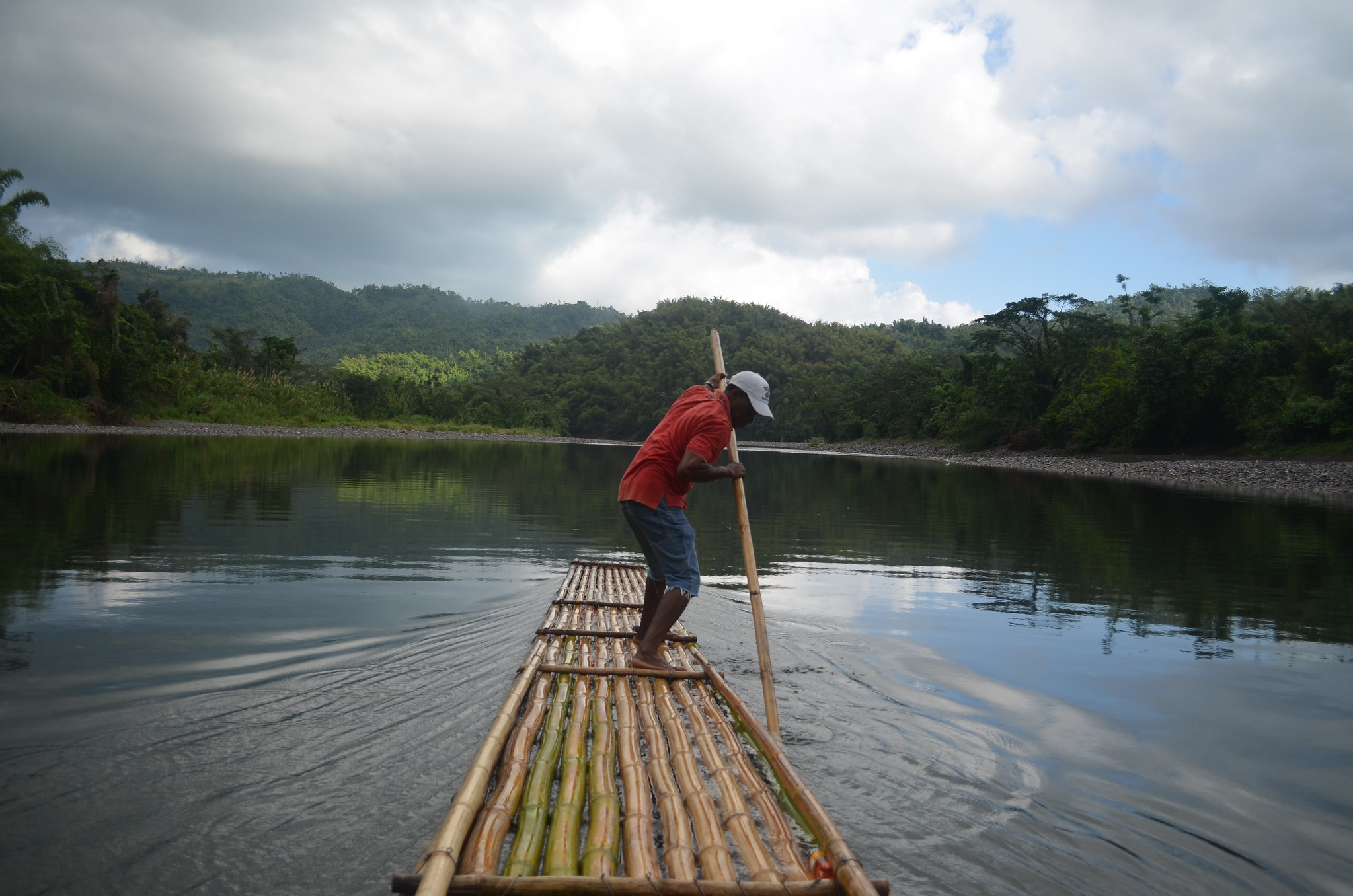 Riding on a bamboo raft on the Rio Grande, west of Port Antonio, Jamaica. Photo by Kent MacElwee on Flickr, CC BY-NC-ND 2.0.

Meanwhile, for several years now, residents of Harbour Heights, situated in Harbour View to the south-west of Kingston, have been living in fear, with their homes teetering on the edge of a gully whose walls have been gradually collapsing. No one seemed to want to take responsibility, despite the residents’ vigorous lobbying and media interviews. Earlier this year, funds were promised and China Harbour Engineering Corporation (CHEC) was to repair the broken gully walls as part of the South Coast Highway Project.

Outside urban areas, Jamaica's rivers are also in trouble, and not only because, like the gullies, they are often used as garbage dumps. Rivers—including the Rio Cobre—are used and abused because of industrial pollution. One recent incident resulted in a major fish kill, depriving residents of food, income, and fresh water, in addition to affecting their health. The water was so polluted with toxic chemicals that the National Water Commission had to shut down its plant for several days. The National Environment and Planning Agency (NEPA) plans to take the bauxite mining company involved in the incident to court once again, as this was not the first time something like this has happened. The case is scheduled to be heard this October.

Jamaican rivers, however, have other problems besides pollution. Climate change is digging deeper into the local landscape, made worse by environmentally harmful human activities that are often improperly monitored and regulated, with the most economically disenfranchised people typically suffering from the impact.

Take Bull Bay, a low-income community on the outskirts of Kingston. In a recent column in the Jamaica Gleaner, JET CEO Theresa Rodriguez-Moodie described the area as a “sacrificial zone.” Quarrying for gypsum for the nearby Caribbean Cement Company in the hills above the communities of Nine, Ten and Eleven Miles, has greatly expanded in recent years, destroying an entire hillside. Community members have been vocal, speaking many times about their plight, because they know the environment they live in is highly vulnerable and unstable—especially with the impact of climate change. They live in fear of storms, or even heavy rains, which bring down tons of silt, sand and stones from the hills. During recent downpours caused by tropical storms, residents were seen frantically trying to clear debris from the river so that it did not overflow and swamp their homes.

Another ever-present threat to local rivers is sand mining, both legal and illegal. Extractive industries of various kinds have devastated Jamaica's landscape and ecosystems. The rural community of Parnassus in Clarendon, for instance, is faced with the threat of tremendous erosion and the collapse of valuable agricultural land. Sand mining in the Rio Minho has caused the river to alter its natural course. The company involved says it is properly licensed, adding that the sand in the Rio Minho has run out. There continues to be a huge demand for sand in the country's ever-growing construction industry, and the company has “resorted to land mining.”

As for the magnificent Rio Grande in Portland, which is highly promoted as a tourist attraction, NEPA issued enforcement notices a year ago to Agro Expo, which was in breach of its permits. Sand mining in this beautiful river has been going on for years. 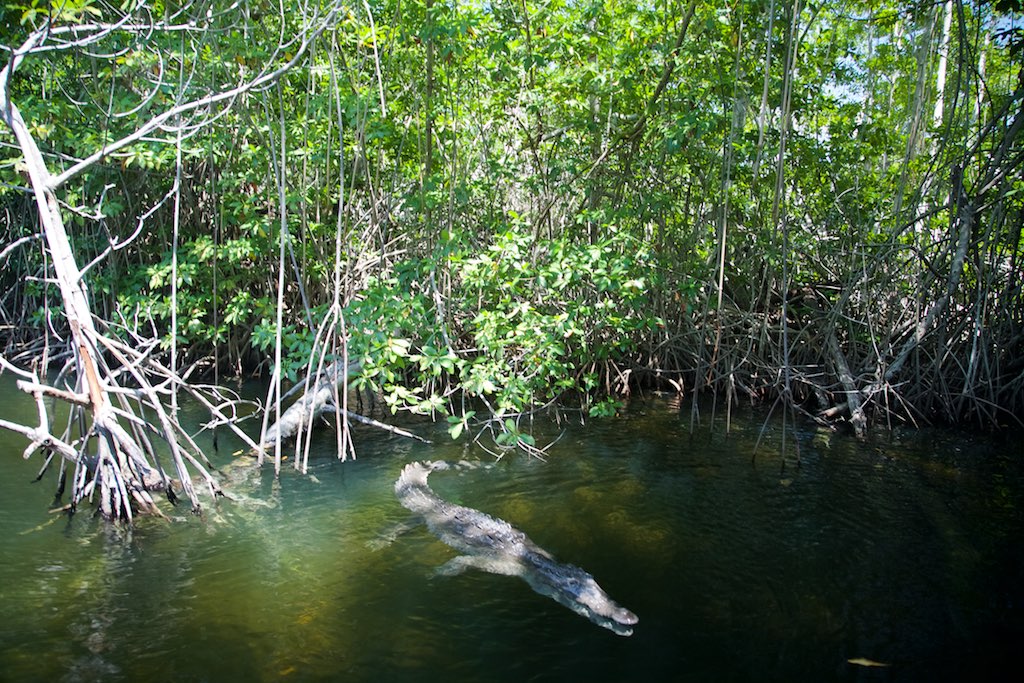 Amid all this destruction, Jamaicans love their rivers. They are places for recreation and “cooling out.” They love the secluded waterfalls at Cane River and Gordon Town. They enjoy the picturesque Old Spanish Bridge in St. Mary, the site of many excursions and parties. They love clambering over the boulders in the Wag Water, at Castleton Botanical Gardens, a popular picnic spot, and even love the unpredictable rivers, like Black River, the island's second-longest and widest waterway, with its towering mangrove forest, crocodiles and swamp birds.

While a special day for rivers may not instantly solve all the problems the country's rivers currently face, it may inspire Jamaicans to appreciate them a little more, and monitor the waterways for signs of health—or abuse.