"Her songs, slogans and writings will continue to inspire us" 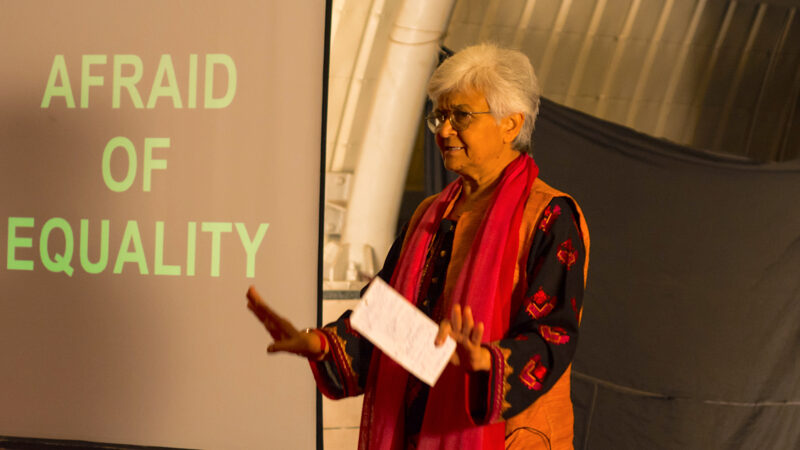 Kamla Bhasin, a pioneer of the women’s rights movement in South Asia, breathed her last on Saturday, September 25, 2021, in New Delhi, India. She was 75 years old and was diagnosed with cancer a few months earlier. She is known as a feminist, author, organizer, protester, secularist and social scientist. She was deemed one of the best gender trainers in the region and an icon of women's rights. During the five decades of her work in fields of women’s rights, human development, peace and democracy, she has trained and inspired thousands of feminists across many South Asian countries. Activists remembered her on social media and mourned her death.

Our dearest friend, our comrade, most beautiful human being,Kamla Bhasin left this world at 2.45 am. She was diagnosed with cancer three months to this day. Having touched so many lives in such a positive way, Kamla continues to live on in us and among us. Rise in Power, Kamla pic.twitter.com/Ia5Q7wtZqj

Kamla Bhasin was born on April 24, 1946, in Shaheedanwali village in present-day Pakistan and her family moved to Rajsthan during the partition of India in 1947. She completed a master's degree from Rajasthan University and went to West Germany in the late 1960s with a fellowship to study sociology of development and was later employed as a teacher in Bad Honnef. After she returned to India in 1970, she started working for Seva Mandir, a grassroots NGO in Udaipur, as a development worker and activist. After that, she joined the Food and Agriculture Organization (FAO), and was first posted in Bangladesh in 1976 to work with Gonoshasthaya Kendra, a rural public health organization. In the next decades, her main job was organizing capacity-building programs, identifying innovative development work in Asian countries and creating networks between people in many countries of South Asia.

Development Analyst Shobha Raghuram from Bangalore remembered the many facets of Bhasin:

Bhasin is best known for her work with Sangat, a South Asian Feminists Network which came out of the Sangat Month Long Course (a feminist capacity building course on gender, sustainable livelihoods, human rights and peace) as part of her FAO work. Sangat has developed the capacities of hundreds of women activists from South Asian countries during the 1980s and 1990s. The Sangat Network was officially formed in 1998 at a workshop of gender trainers, held in Bangladesh and organized by an FAO-NGO Programme. Bhasin quit her job with FAO in 2002 and joined the Sangat Network as an adviser, to continue her work. The alumni of the Sangat courses across South Asia are connected with each other, and engage in cross-border cooperation and events each year. The network is currently facilitated by Jagori, a feminist organization Bhasin co-founded in 1984.

Bhasin also played a crucial role in the outreach of the One Billion Rising global campaign as the South Asia Coordinator.

Kamla Bhasin was featured in several interviews and TEDx talks across India. Here is one such talk from last year at TEDxDurbarMarg:

Kamla Bhasin wrote over 19 books and many training materials on understanding patriarchy and gender, some of which have been translated into dozens of languages. In the 1980s, while buying nursery rhyme books for her young children she was shocked by the stereotyping and inbuilt patriarchalism in most books, where the fathers went to work and mothers stayed at home to cook and take care of children, and the boys would go on adventures leaving the little girls behind.

So Bhasin wrote rhymes that reflected the modern household, which told the stories of working mothers and girls who were into sports just like the boys. She published those rhymes in a book titled “Housework is Everyone’s Work – Rhymes for Just and Happy Families,” which was translated into several languages.

One of her poems, “Because I Am a Girl, I Must Study,” which stresses the need for women's empowerment through education, is very popular among activists. Sruthi Kalyani tweets:

I can't explain how much this poem means to me. We have a lot to do. We must study. #KamlaBhasin pic.twitter.com/7qTlGjvZvK

One of Bhasin's slogans — azadi (freedom in Urdu) — is very popular among activists and had been used in different socio-political protests. She first heard the chant for azadi in 1984, among feminists in Pakistan, who were protesting against the Zia-ul-Haq regime. Inspired, she wrote a poem and popularized the chant in India, and it went on to be featured in a Bollywood movie.

मेरी बहनें माँगें आज़ादी!!!✊?
The incomparable Kamla Bhasin has left her body. But her songs, slogans and writings will continue to inspire us and energise our struggles for a more equal and just world. Rest in power, Kamla! pic.twitter.com/qGyqIuIcS5

She touched many lives

Activists across South Asia remember her work and how she touched people's lives. Bhasin helped build bridges between activists from India, Pakistan, Bangladesh, Nepal and Sri Lanka through her training works via the Sangat Network.

Today is a sad day for the women of the global South. Social Scientist, feminist activist and a stalwart of the women's movement in India Kamla Bhasin passed away. She was an inspiration to many young feminists today, including me.
Rest in power #KamlaBhasin! pic.twitter.com/9KdJE0DKh6

#KamlaBhasin was a South Asian citizen in the true sense of the word. She embodied some of HRCP’s most cherished values: the struggle to protect democratic ideals, the resistance against patriarchy and, above all, the power of communities to mobilise for their rights. pic.twitter.com/b2dX4OwxCB

Today is a sad day.
You will live through your work, your smiles, the goodness of your heart and your eagerness to watch people rise up, survive and do so much more.
Wands Up for the one and only Kamla Bhasin! May you rest in peace :( #KamlaBhasin pic.twitter.com/YzRfEUQIBR

Bhasin rejected the idea that feminism is a solely Western concept, insisting that it is rooted in the struggles and tribulations of people of different countries. She held that the struggle for gender equality was not a fight between men and women, holding that the patriarchy is equally damaging for men because it dehumanizes and brutalizes them. According to her, despite all the advances of women in South Asia, they are falling behind because of three things: capitalist patriarchy, right-wing politics and religious fundamentalism.

Kamla Bhasin- a powerhouse of love, solidarity & feminist action across borders.
You were loved by younger and older feminists in Pakistan, in India, in Srilanka, in Bangladesh and in Nepal. We see you,
we hear you,we sing with you- you are still with us.
Rest in power Kamla ji pic.twitter.com/CE6xssJdzs