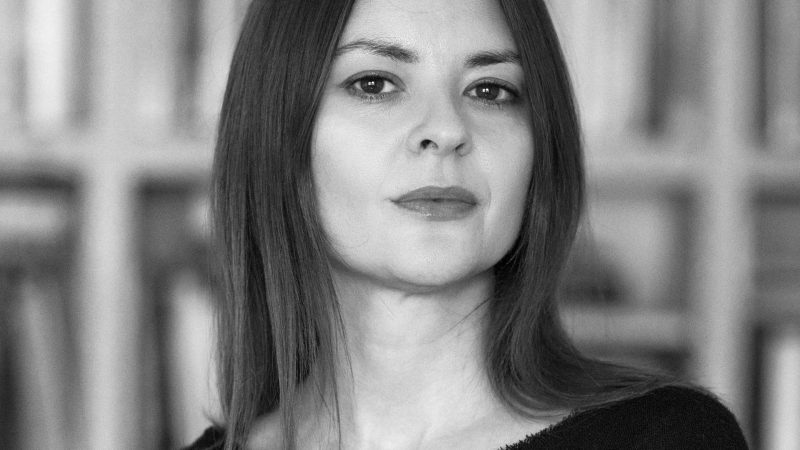 This story by Kristina Gadže was originally published on Balkan Diskurs, a project of the Post-Conflict Research Center (PCRC). An edited version is republished by Global Voices as part of a content-sharing agreement.

Amila Ramović, assistant professor at the department of music theory and pedagogy at the Music Academy of the University of Sarajevo, talked to Balkan Diskurs about critical thinking through art. In addition to her academic title, she is the president of the Musicological Society of the Federation of Bosnia and Herzegovina and a member of the International Musicological Society based in Basel.

Ramović pointed out that her profession gives her the opportunity to meet many future artists:

Art students are passionate about this vocation and in their work they are guided by optimism that the values they instinctively and intellectually feel will be recognized by their environment. That is why it is a special privilege for anyone interested in art to work with young people who are not yet „corrupt“ by conformism, which is the greatest enemy of progressive and critical artistic thought – as only such art is the real one. However, it is true that this attitude of theirs is quickly tested as soon as they finish their studies, because our society does not have any platform to support artists“, points out.

She said that the young musicians she works with, even the most talented and award-winning ones, usually give up artistic activities very quickly and look for a job in music schools, and that such daily work exhausts them. She added:

This is not strange at all, especially when we know that, for example, in the public institutional sector in Sarajevo, there is only the Philharmonic and the Opera where someone can play music professionally. In this sense, we can neglect the independent sector, because it is also neglected by the administrations with miserable financing. So young artists cannot do music for living. This reality worries them, demoralizes them and in the end they come to simply surrender to that reality.

She survived the siege of Sarajevo (1992–1996) and saw how art works even in such conditions. It was during the siege, she says, that it became visible and clear, that the experience of art is directly related to survival as one of the most resilient ways of preserving people’s identity.

Ramović recalled that it was a period when citizens risked their lives to go to exhibitions and shows:

In a situation when our physical existence was called into question, when we as human beings were annulled by the aggressors, but also by the „civilized“ European world that surrounds us, the continuity of life was confirmed by the achievements of the spirit. At that time, we felt that biological survival, survival itself, having to eat, being warmed up, was not enough.

History and culture are always interesting topics for artists, she adds, and in BiH, which is burdened with historical narratives, this is especially pronounced. Amila Ramović explained:

In post-war Bosnia, precisely because of the dominant policies and narratives that those policies placed, there was a flood of ethno-national kitsch in the field of art, based on historical and mythological narratives where devotion to the people and homeland is manifested in the format of works of art. I say in format, because these works are consciously or unconsciously conceived with the aim of initiating some empathic processes, in the way that pop culture seduces its consumers. In the end, such achievements are often strengthened by social support.

She says that serious art requires a contemporary critical approach, contextualized in the knowledge not only of BiH reality, but also of contemporary artistic discourse:

Such artistic speech, which we recognize as the face of successful BiH art, is largely carried by artists who work internationally, independent of the reactions from our environment. Braco Dimitrijević is certainly the most important artistic figure of the BiH art scene of all time. His works are regularly in the permanent exhibition of the world’s most important museums. Despite that, I am not sure that he is recognized through the administrations in his full capacity, but also in our wider social space.

She explains that the limits of artistic discourse are largely connected with the fact that BiH, at all levels, actually invests very little in critically oriented art, because it is not in the interest of what leading policies aim for.

When asked whether critical culture sometimes leads to separation from one’s own culture in the context of the departure of young people from these areas, Ramović answered that these two things work side by side:

Young people are leaving BiH because they do not see the possibility that something could change, and that is especially true in the artistic milieu. What is true is that the situation can be changed by serious critical action. And that critical culture, that is, critical thinking through arguments, formation of attitude, articulation of attitude and its placement in public space, is what we as a society lack on every agenda. I often see young people, but not only young people, giving up critical action.

Art is independent of politics, but the question arises as to how much they need to be connected, if they are to achieve goals benefiting  the whole society. Ramović believes that art involves people and, therefore, in her opinion, it is political in nature, as it shapes the spirit and cultural heritage that builds the identity of a certain region.

Because art is attuned with reality, regardless of its subjects and form—abstract or concrete—it enables its audience to recognize nuance and understand the world in its ambiguity. For Ramović, good art is usually the enemy of right-wing politics, and good artists are almost always somewhere directed to the left.

She advises young artists to imagine the future, have concrete goals in front of them and fight to achieve them.

Very often, the achievement of these goals is quite realistic, only that the messages from the social reality lead us to doubt and pessimism. The dominant policy in BiH is based on the prevention of resistance and on breaking the will for rebellion and change, so we are ‘trained’ by both the administration and the media. But this position of theirs is fundamentally very weak and it can easily be defeated in the face of strong creative energy.

She points out that it is necessary for associations of art students and young artists in the independent sector to articulate their own visions and use public space, social networks and media to put pressure on those who can create the conditions for their visions to be realized.

I do hope that young musicians, but also young artists in general, will initiate some public actions and ask public administrations to change their attitude towards them, but that has not happened yet. If we look at the spending of budget funds, it turns out that refined intellectual work is not something that those who finance cultural production recognize as a value. That would have to change if we want BiH to get an active, stable, coherent and relevant art scene.