A resident of Almaty violently resisted an eviction order 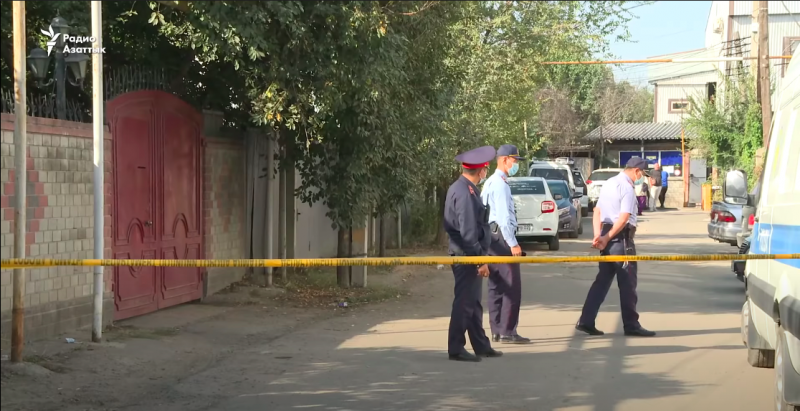 Police cordoned off the area of the shooting in Almaty. Screengrab from Radio Azattyk's YouTube video.

On the afternoon of September 20, a man opened fire against police and a bailiff, killing five, in a rare episode of violence in Almaty, the most populous city in Kazakhstan.

Unlike the blind violence that brought an 18-year-old student to shoot and kill several people at his university in Perm, in central Russia, on the same day, the man in Kazakhstan was possibly pushed to such an extreme act by a socioeconomic system that has grown increasingly unfair.

Igor Duzhnov, 54, lived in the Akbulak district in the west of Almaty.

In 2011, Duzhnov and his wife took a loan from Bank CenterCredit, a medium-sized local lender, in an effort to enhance their businesses. By December 2014, a court had ruled that the failure to repay the loan on time would impose a penalty on Duzhnov and his family.

They had listed their home and another commercial property they owned as a collateral for the loan. In 2018, the bank proceeded to auction the properties, re-purchasing one and selling the residential lot to a local buyer. The bank said that the electronic auction in 2014 was run in accordance to the law, and the absence of offers for the initial price triggered the system to decrease the asking price. Thus the collateral of the loan was sold at a discounted price.

Duzhnov and his family continued to live in the house, which they considered theirs, and refused to comply with default notices and court orders asking to vacate the property.

When the bailiff—accompanied by two policemen, the legitimate homeowner, and one of his friends—showed up at Duzhnov's door, Duzhnov took out a hunting rifle and started shooting. All five were killed, and Duzhnov was later apprehended by the police.

Duzhnov could now face between 20 years and life in prison. His wife, Anaid Demirchyan, said Duzhnov was in a state of depression, “he recently said that he was going crazy from despair. does not know what to do next. All these litigations [took a toll on him].”

People in Kazakhstan reacted to this act of violence, essentially condemning the killings, but also justifying Duzhnov's unwillingness to surrender before what was widely perceived as unjust treatment.

Commenting on a YouTube video of the aftermath of the shooting, users expressed their disappointment in the behavior of the bank and the authorities.

That's how you defend yourself from the fascist police. (Rada Duma)

[The authorities] have driven people to such a reaction. The judicial system is to blame. Judges do not consider people as humans. Here is the result. Now they will begin to fix all the affairs of this house so that there are no snags. Beasts. Sorry for the guy. (Edward the Brave)

Corruption has seeped through government agencies, judges, law enforcement agencies …  you drove the people [to shoot]. (Nauryzkhan B.)

It would be better if these bailiffs were confiscating everything stolen through corruption and [laundered] money, rather than than taking away the last housing and droving a family to despair. (Aisulu D.)

Andrei Linnik, a member of the Majilis, the country's parliament, revived a proposal to introduce individual bankruptcy regulations and tighten the conditions under which banks can seize collateral assets.

The population's massive debt burden is caused, among other things, by the high interest rate [set by] the National Bank. [Among other causes are] the unfairness of court decisions on such disputes and the possible collusion between bailiffs and bank employees. It is necessary to guarantee the basic, vital rights of bankrupt citizens.

Such a measure would ring-fence the banks’ ability to sell collateral to the market before an agreement between the parties is reached.

Banks in Kazakhstan were harshly hit by the global financial crisis of 2007. Several defaulted; others were acquired by the country's largest lenders. The shockwaves of the crisis are still felt in the country, as several families failed to repay their debts—especially those denominated in US dollars—thus further weakening the financial health of the banks.