The seeds are ingrained in Tamang culture and rituals 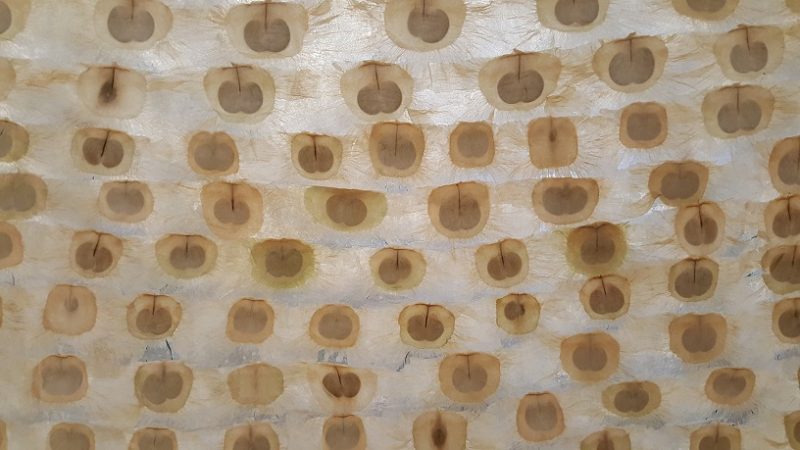 Artist Subas Tamang uses the seeds of the tree of Damocles, considered sacred by many indigenous peoples in Nepal, as his canvas. Photo by Sanjib Chaudhary. Used with permission.

Translucent seeds of the tree of Damocles (Oroxylum indicum), meticulously glued together, form Nepali artist Subas Tamang's canvas. The round seeds, known for their medicinal values, are considered pure and sacred since they are enclosed in sword-shaped pods — far from the touch of bumblebees and other insects. In a nod to the seeds’ potential to grow into trees, Subas Tamang tells the stories of discrimination and oppression meted out to indigenous Tamang people by the State — the Rana rulers in particular.

“Called ko ko mhendo or heart flower in Tamang language, these seeds are ingrained in Tamang culture and rituals,” said Subas, talking to Global Voices. “The Tamangs attach these seeds to invitations sent out on auspicious occasions. They have become symbols of Tamang identity.”

That’s why Subas chose the sacred seeds to tell the stories, called Kaiten in the Tamang language. Kaiten is the Tamang oral story of origins of human life, culture and tradition, usually told by an elder storyteller, called Tamba. Like shamans using the seeds to heal sick people, Subas uses them as a medium to heal wounds of the past, the wounds of torment and trauma.

The Tamang men were reduced to mere porters, palanquin carriers, hookah and umbrella bearers, and construction labour. The Tamang women, likewise, would work as nursemaids and wet nurses, while also singing, dancing and entertaining the rulers. 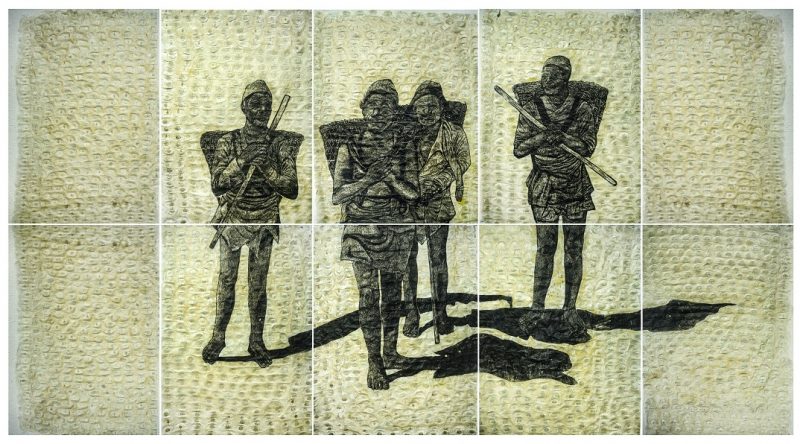 The Tamangs were barred from joining the British Army. The only rank for them in the Nepal Army was that of the pipa, the menial workers at the lowest rungs of the army. They could never rise up the ranks. Subas illustrates this through his artwork Pipa I, showing four men carrying doko, wicker baskets, on their backs.

His woodcut print on ko ko mhendo titled Gole Kaila features the protagonist Tularam Tamang aka Gole Kaila who was martyred in 1950 in Biratnagar, a city in eastern Nepal. Though he died fighting against the Rana regime to establish democracy, he was never accorded the status of a martyr. 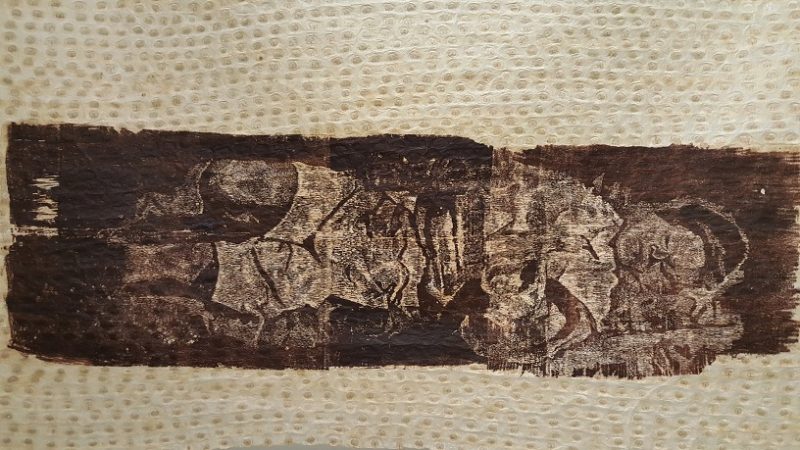 Gole Kaila, woodcut on ko ko mhendo, portrays the protagonist Tularam Tamang who was never accorded the status of a martyr despite his sacrifice. Photo by Sanjib Chaudhary. Used with permission.

Another medium Subas chooses for his artworks is lokta, handmade Nepali paper, the same paper that his kinsmen produced from the bark of the Nepali paper plant and carried to palaces in the capital city Kathmandu as corvée (forced unpaid labour in lieu of taxes). The same paper carried orders and laws that would torment them further. But Subas retells the story of his community’s anguish through the same paper. His artworks Kagaji Rakam, Kagaji Rakam I and Baigani Rakam show men in traditional attire but with their heads covered by, respectively, a bouquet of lokta flowers, a sheet of handmade paper and a bunch of mangoes. 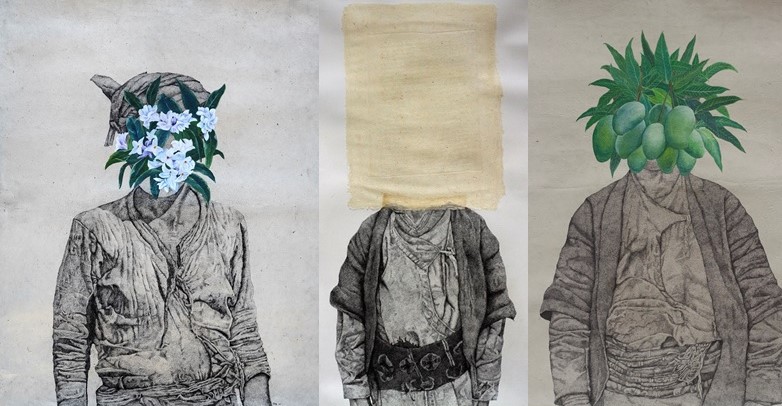 The artworks Kagaji Rakam, Kagaji Rakam I and Baigani Rakam show how Tamangs were made to work as corvée labour. Photo by Subas Tamang. Used with permission.

Expanding on his work, Subas said:

“In order to pay taxes, Tamangs had to work for free for the State. The Tamangs from Bumtang of Nuwakot District had to collect lokta barks, process them into paper and carry those papers to the palace. Each household would need to produce 200 sheets of paper. Likewise, Tamangs had to work in fruit orchards and carry the fruit, especially mangoes to the palaces in Kathmandu. They had to leave Kathmandu the same day after dropping the fruit.”

Also read: ‘Opposite Dreams: The Politics of Local’: Art raises awareness around social issues in Nepal

Subas doesn’t stop here. In his artwork Hami aafai aafno pahichan lekhnnechhau (we will write our identity ourselves), a series of five slates, he carves excerpts from problematic and judgemental texts about the Tamangs, then erases it with sandpaper and leaves a blank slate. 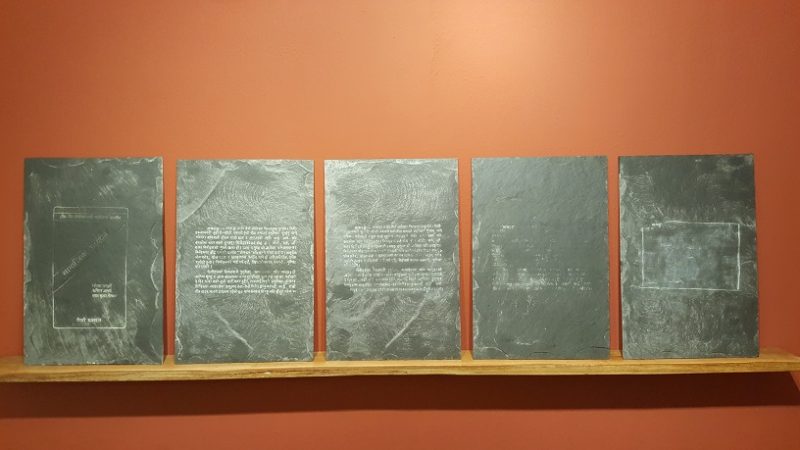 In his artwork Hami aafai aafno pahichan lekhnechhau, Subas portrays the judgemental text prevalent even in the study materials based on the curriculum of the Public Service Commission. Photo by Sanjib Chaudhary. Used with permission

“Even a social  studies material said to be based on the new curriculum of Public Service Commission wrongly portrays Tamangs as people willing to sell their daughters and daughters-in-law, and even themselves just for a good meal,” said Subas. “I want to say why we should rely on the story written by others. We will write our own story.”

The exhibition “Kaiten: History, memory, identity” is running at the Siddhartha Art Gallery, Baber Mahal Revisited in Kathmandu until 28 September 2021.