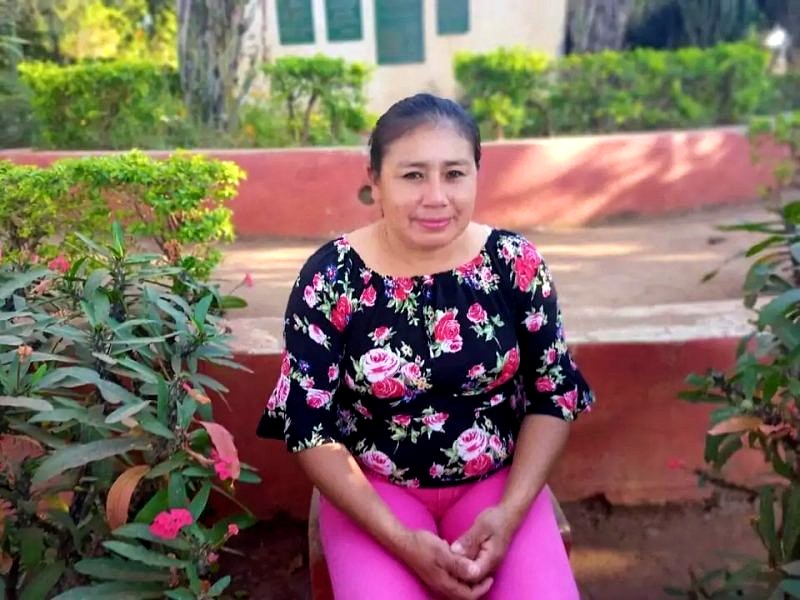 This is an excerpt from the original text written by Esther Mamani and published in the digital magazine Muy Waso.

The Bolivian Chiquitania is the largest and most biodiverse tropical dry forest in the world. For almost a decade, forest fires have left millions of animals dead, millions of hectares burned and thousands of families affected every year. Forest fires have increasingly become an issue in Bolivia in 2021.

In the face of the environmental and humanitarian catastrophe, Indigenous women like Germinda Casupá take on the defense of their territory.

Germinda, 45, wears jeans, a cotton T-shirt, and sneakers and keeps her dark hair in a bun. To protect herself from the sun, she always wears a hat, also made of fabric. The long walks she must take in the communities are not hard for her; as a young girl, she played football, basketball, and volleyball.

The two-hour journey from San Ignacio to Santa Anita, two different communities where Germinda works, is along a gravel road. During the trip, despite being stifled by the dust and heat in the taxi cab, Germinda smiles and is cheerful.

Upon arriving in the community, Germinda greets local leaders and reviews their work plans, as the slash-and-burn season is coming up. 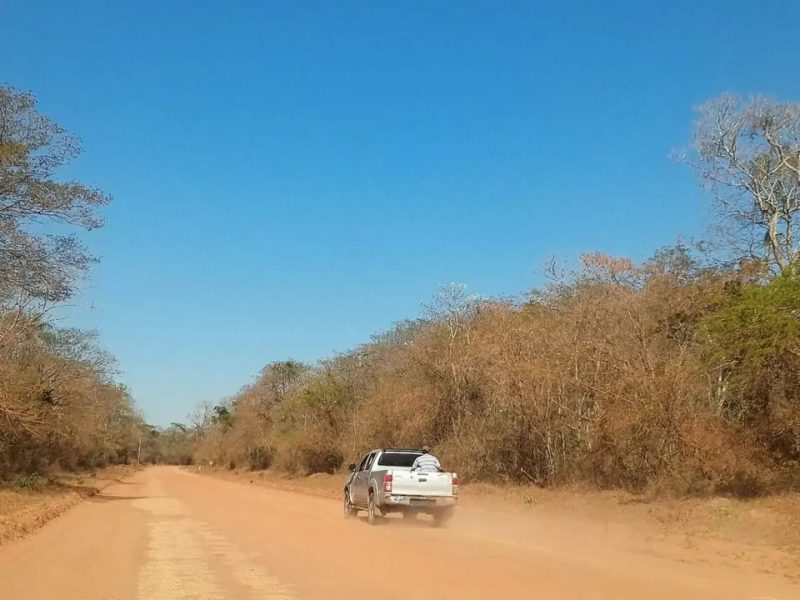 Chiquitania is the largest tropical dry forest in the world and, until 2019, was also the best preserved. Most of this territory is in the central department of Santa Cruz.

During the burning of land (chaqueo) season which starts between July and August, the spread of the fire is a nightmare that repeats every year. This practice is traditionally done for the preparation of agricultural soils, but for more than a decade it has become ecocidal.

Those who practice chaqueos explain that the fires clean cultivation areas belonging to small, medium, and large producers of soybeans, corn, and beans.

According to a report by the Tierra Foundation, 26.3 percent of the area burned in Santa Cruz during 2019 corresponded to the land of large and medium-sized agricultural companies. Only 4.9 percent corresponded to communal properties and barely 2.7 percent to small properties.

Uncontrolled fires caused by the agro-industry, which extend to even public lands and protected areas, affect the safety of smaller communities.

Yet, in 2019, many smaller communities paid fines for the fires in their territories. The sanctions reached up to 80,000 Bolivianos, or 11,500 US dollars.

Arlena Algarañaz, Germinda Casupá's best friend, remembers with anger the long hours spent in the offices of the Forest and Land Inspection and Control Authority. They were trying to explain to officials that the fires were not caused by local communities.

Arlena recalls that “Germinda was one of the most active participants in the women's empowerment workshops we did with the Ombudsman and the Platform for Comprehensive Family Care.”

A struggle that began at home

Despite her determination and effort, Germinda still had a hurdle to overcome: her ex-husband, whom she married when she was 16 years old.

He did not agree that Germinda should study and work at the same time. Whenever she went out, he harassed her and was violent with her under the pretext of “jealousy.” For many years he beat and insulted her.

More than five years ago, the cycle of violence reached new heights. He told her to “save money to buy a box” (referring to a coffin). Germinda understood the gravity of the threat.

So, 2015 became a year of change for Germinda. Not only did she break it off with her husband, but she began her career in Indigenous leadership.

Removed from that relationship, it became easier for Germinda to continue her training by attending workshops and holding positions where she demonstrated her temperament: strong but conciliatory, committed, and responsible. 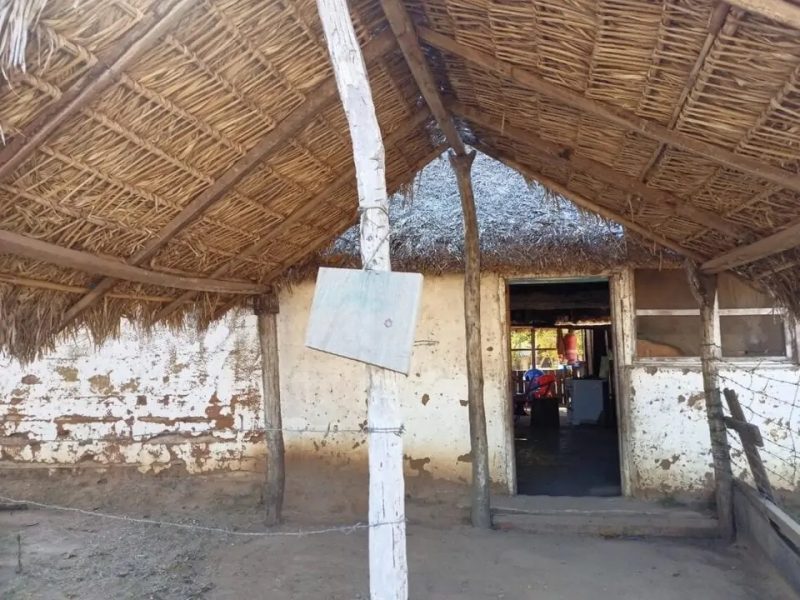 Classrooms of a school in the community of Santa Anita. Photo: Esther Mamani

Germinda against machismo and misogynist violence

In 2018, she founded the League of Women Community Defenders. This organization is a community alert system for situations of violence against women in the region.

“Germinda is always attentive to help her peers. If we know of a case of violence, we report it,” explains Elena Guasese, a resident of Sañonama.

In addition, they describe her as someone supported by large NGOs. This is a pejorative way of saying that she only works with foundations or non-profit organizations.

“Why does a woman have to be going everywhere? Who appointed her?” asks a leader.

In 2019, Germinda was invited to speak at the hearing of the International Rights of Nature Tribunal in Chile to denounce the Bolivian state for ecocide. The local chiefs did not support Germinda's speech. However, she had been elected through the support of her female colleagues. After testimony from Germinda and others, the court determined that the Bolivian State was responsible for ecocide.

The 2019 International Rights of Nature Tribunal ruling was a victory for Germinda, but it meant the beginning of more tasks and responsibilities.

In 2020 and in 2021, the agricultural frontier continued to expand and fires returned to Chiquitania. These new fires demand more work from Germinda to put out the flames and protect the life of forests and their inhabitants.

Germinda is currently touring the communities to review the actions being taken to mitigate the effects of the burns.

The monitoring carried out by Germinda, among other things, involves updating the number of families in the community, checking if they have access to drinking water or if there are vehicles that have enough fuel for possible evacuations.

“We have to move from concern to action,” says Germinda before boarding a taxi to visit three communities around San Ignacio de Velasco: Sañonama, Santa Anita, and Espíritu. 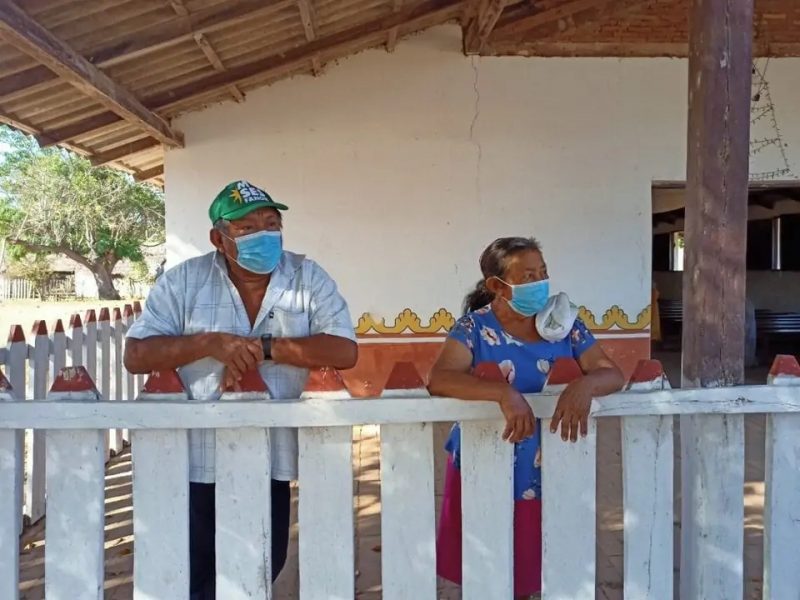 The fight against fire never stops

On her way to the community of Espíritu, Germinda talks with some firefighters working in the area. The fires restarted in Candelaria, San Matías, and Roboré, and the smell of burning causes terror again.

In addition to the fires, Germinda has another concern that forces her to speed up the tour: her youngest son is ill, he probably has a stomach infection. She has three children.

Although one of her relatives will help her taking care of her son, Germinda is restless: the tasks begin to accumulate.

“Sometimes I think about retiring from all this. Every year it is more difficult to battle with the fire,” she laments.

Germinda had arranged several meetings with the women of the community in Espíritu. She planned to talk about access to safe drinking water, education, and health.

But the dangerous spread of the fire takes over the conversations.

That day, after her last meeting, Germinda touches her forehead, fixes her hat, and ends her tour.

“It was very nice to present to the International Rights of Nature Tribunal,” Germinda recalls with a smile, “but here in the woods there is still no ruling to put out the fire.”