French officials say they were blindsided by the new partnership 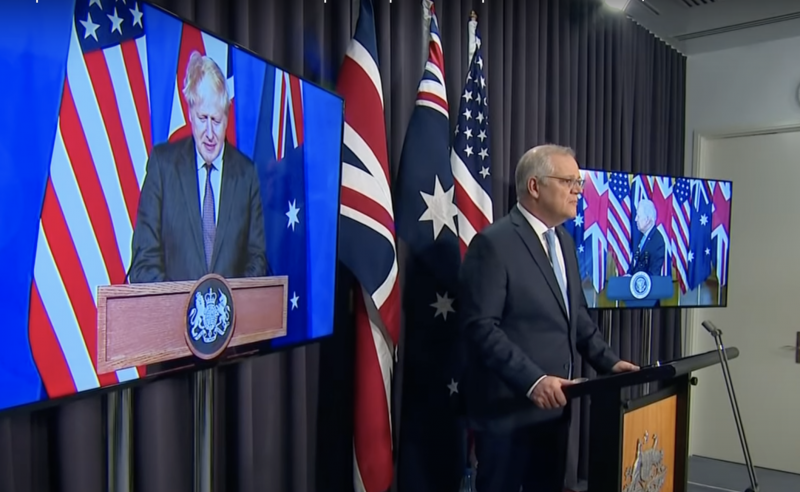 When the leaders of Australia, the United Kingdom and the United States (AUKUS) announced a new ‘enhanced trilateral security partnership’, they probably expected the most strident reaction to come from the Chinese government, whose rising maritime and military might partly spurred the new agreement.

However, China’s criticism has been somewhat muted compared to the loud condemnation and diplomatic reaction from France.

While tensions have been building between Australia and China, its largest trading partner, for some time, they peaked in 2020 when Australia called for an independent investigation into the origins of COVID-19.

Though the recent partnership announcement did not mention the People's Republic of China directly, AUKUS is clearly hoping to contain Chinese ambitions in the Indo-Pacific region. The joint statement by the Australia-US Ministerial Consultations (AUSMIN) on September 17, referenced the PRC's ‘expansive maritime claims in the South China Sea’. The Chinese government criticised their ‘obsolete Cold War mentality':

The Global Times, a Chinese state media newspaper, was blunt in its editorial:

Australian troops are also most likely to be the first batch of Western soldiers to waste their lives in the South China Sea.

The agreement would allow Australia to purchase armaments from the US and UK. The big-ticket sale involves eight nuclear-powered submarines, which will replace an existing 90 billion Australian dollar (65 billion US dollar) program with France for 12 diesel/electric boats. The subs are to be partly built in South Australia with the help of US and UK technology and expertise.

The costs have not yet been determined but are likely to exceed the French contract price. It could be more than two decades before the subs are delivered to the Australian navy.

The French government claimed it was ‘blind-sided’ by the deal, which was a ‘stab in the back’. France has recalled its ambassadors from both Canberra and Washington — a highly unusual action for a close ally. The UK similarly received a strong rebuke from the French:

A nice little put-down of the administration of @BorisJohnson by the French ‘Just a junior partner of the US and Australia'! #r4today

French officials openly scorned the deal, referring to Australia’s ‘duplicity, contempt and lies’ and to the UK as ‘a spare tyre’ in the deal.

Australia’s Defence Minister, Peter Dutton dismissed French criticisms, noting there had been ongoing issues over the contract, with his Defence head flagging possible alternatives earlier in the year and PM Morrison warning the French company to meet deadlines.

Morrison stated that the fleet would not be nuclear-armed and that Australia would not set out to establish a civil nuclear capability.

Although the deal was endorsed by the Labor Party opposition, they slammed the government for mishandling the deal and wasting money. After the announcement, Former Labor prime minister, Paul Keating, expressed concern about potentially losing national sovereignty:

This AUKUS arrangement would witness a further dramatic loss of Australian sovereignty, as materiel dependency on the US would rob Australia of any freedom or choice in any engagement it may deem appropriate, writes Paul Keating | OPINION #AUKUS https://t.co/ex8CuyqE1m

There was also criticism of the apparent flip-flop by the government regarding its preferred sub-type:

The political class are engaged in rewriting the truth of the French deal to make it appear that we ditched French diesel subs in favour of US nuclear powered.
The French subs are nuclear. We were paying to have them converted to conventional diesel.

The furore was met with a good dose of humour down under, which included the popular satirical website The Shovel:

The Australian government has spent about $4 billion so far to get zero submarines. If they’d asked us we would’ve done it for half that.

The diplomatic conflict has been a cartoonist’s delight all week:

To add insult to injury, US President Biden appeared to forget PM Morrison’s name during the joint press conference, calling him ‘that fella down under’.

This just made my day. Thank you Joe.

The greatest threats to Australia are the climate crisis, the housing crisis, the mental health crisis & COVID.

We urgently need to spend $$ on what actually matters.

Not subs to fuel the warmongering fever dreams of a PM whose name Joe Biden doesn't even remember.

Bandt had earlier called the boats ‘floating Chernobyls’ in reference to the nuclear reactors onboard.

Some Aussies underlined the deterioration in Australia/France relations:

Message from a French friend in Paris: “I wanted to underline the level of anger that exists here in France at the moment. Your government is an embarrassment, you already know that – but the damage regarding the Australian image here is huge.”

Meanwhile, French officials intensified their criticism of the AUKUS nations and proposed halting negotiations over a European Union free trade agreement with Australia:

France is throwing down the gauntlet to the other EU countries, who have to decide whether to help a humiliated Paris weaken China’s main rival in the Indo-Pacific, a region the EU has newly devoted itself to. https://t.co/gZe534yDPk

Writing at The Conversation, academics Romain Fathi and Claire Rioult addressed the long-term implications of the new partnership:

Left in the dark about Australia’s sudden change of mind, France and the European Union more broadly now face a dramatic re-think of their diplomatic and military doctrine in the Indo-Pacific region on very short notice.

…France proposed a genuine strategic alliance with Australia, one based on mutual respect and common values that would have bolstered Australia’s sovereignty in the long term and diversified Australia’s partnerships to reduce its dependence on those “great and powerful friends”.

However, the French-Australian partnership is unlikely to be salvaged anytime soon given the public humiliation France has felt.

Australia will have a national election in 2022 and Michael West was one of many who saw the partnership in cynical political terms. He said online that the deal was intended to ‘win an election at the expense of good diplomacy’.

Former diplomat Cavan Hogue seemed to sum up the thoughts of many Australians online:

…this deal will cost us a lot of money, a substantial loss of sovereignty, a lowering of our reputation in the world and the potential to get dragged into a war we should avoid.