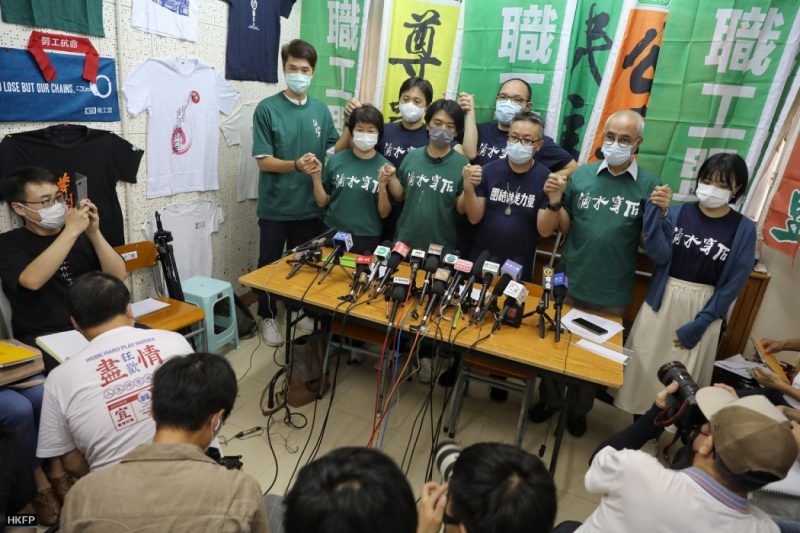 The following post was written by Candice Chau and published in Hong Kong Free Press on September 20, 2021. It is republished on Global Voices under a content partnership agreement.

Hong Kong’s largest pro-democracy union coalition, the Hong Kong Confederation of Trade Unions (HKCTU), says it will disband because of threats to members’ safety. The group is the latest civil society organisation to shut down in Hong Kong in the wake of the 2020 national security law (NSL).

Members of the HKCTU had received messages in recent days making them feel they could face threats to their physical safety if they continue operations, chairperson Joe Wong said on Sunday, 19 of September 2021, when announcing the decision.

Wong denied claims by pro-Beijing media outlets that the HKCTU was an agent for foreign entities, a potential offence under the sweeping NSL.

He said the confederation had worked on some projects with the Solidarity Centre, an organisation under the American Federation of Labor and Congress of Industrial Organizations, on the promotion of labour rights and collective bargaining which did not involve any political activities.

The HKCTU had stopped working with the centre before July last year, when the security law came into effect.

Wong also refuted another claim by Hong Kong’s Beijing-controlled newspaper Wen Wei Po, that the International Trade Union Confederation (ITUC) to which the Hong Kong confederation belongs was a political organisation under the guise of a transnational union.

The chairperson said the ITUC was the world’s largest union confederation. The Beijing-recognised All‑China Federation of Trade Unions had hosted a visiting group from ITUC, and was invited to attend its international meetings as an observer. Wong stressed:

Workers’ movements always stressed international solidarity. The HKCTU cooperating or connecting with unions in other regions is natural and justifiable, the government never said in the past 30 years that this is in violation of any laws… The regime, through state media, has described participation in international unions as colluding with foreign forces. This is a great interference with workers’ rights to participate in unions.

Founded in 1990, the HKCTU until recently represented almost 100 affiliated organisations with around 145,000 members. But around 10 member organisations have dropped out recently.

HKCTU’s executive committee passed a motion on September 16 to begin disbanding, and a vote will be taken at a special members’ meeting on October 3.

Mung Siu-tat, the HKCTU’s chief executive, told his friends on Facebook on September 18 that he had already resigned and left Hong Kong:

The situation in society has worsened drastically, and the political risks [I] face personally are imminent. Based on safety considerations, [I] had to make an emergency decision to leave Hong Kong. A strong power has forced me to make a painful and resigned decision between my two roles of being the chief executive and a father.

The HKCTU’s labour law consultation hotline and monthly donations have ceased operations and the confederation said it had stopped handling new cases for affiliated members.

Wong thanked Lee and former chairperson Carol Ng, who is in custody awaiting trial in a national security case, for their contributions to the confederation and to the Hong Kong’s workers’ movement and apologized for the disbandment decision:

I would like to apologise here to the affiliated members and Hong Kong people, that the HKCTU cannot hold out.