The construction of Chinese patriotic masculinity: ‘sissies will ruin the nation’

'If youths are feminine, the nation will be feminine!' 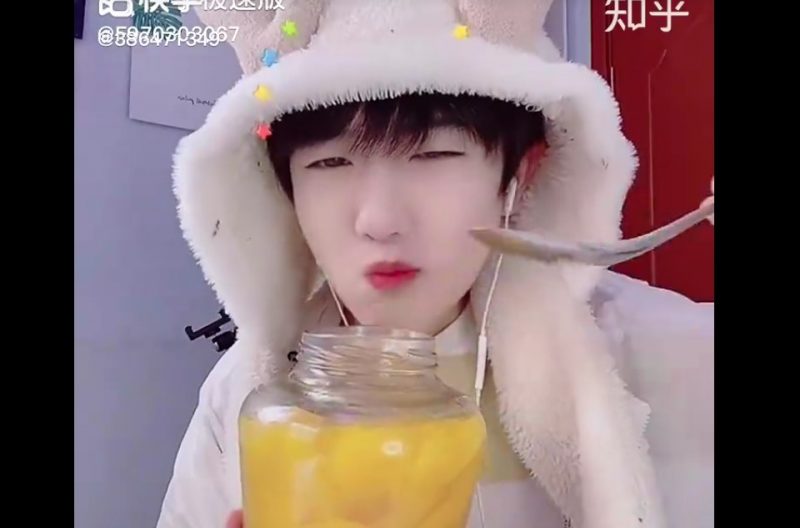 A screenshot of blogger Feng Xiaoyi's ‘eating a peach’ video. via Zhihu.

Many cultural-political scholars have suggested that nationalism involves active control over a population's biological traits such as health, reproduction, gender, sexuality and more. China's recent campaign against ‘niang pao’ (娘炮), a vulgar and derogatory term which is literally translated in English to a ‘girlie gun’ or more commonly as an ‘effeminate men’ or ‘sissies’, is a classic example of such biopolitical attempts to normalize patriotic manliness.

Some online nationalists have been spreading the discourse ‘Sissies will ruin the nation’ (娘炮誤國) on Chinese social media platforms since 2018, after accusing China Central Television of choosing sissy idols for its advertisements and programs.

The online campaign spread through slogans such as ‘If youths are feminine, the nation will be feminine! Sissies will ruin the nation!’ (少年娘，则国娘！娘炮误国！). Anti-effeminate campaigners labelled sissy idols as one of the four pests that should be eliminated to preserve the nation's strength.

They also argued that ‘sissy-style’ was not part of China's conventional culture but an import from Japanese (e.g. Bishōnen) and South Korean (Kkonminam) cultures, and claimed that all strong countries have embraced masculine cultures.

The nationalists had limited support in its early days, with many critiques publically rebuking their claims. Critiques noted that the Chinese literati tradition has a very strong feminine culture and that many powerful Western countries respect and embrace diverse gender expression and LGBTQ+ rights.

But the campaign eventually had full governmental support. In January 2021, the Ministry of Education revealed its plan to include ‘masculinity education’ in the country’s elementary education in wake of a ‘feminization’ crisis in China's boys. And more recently, China's regulators stepped in to suppress the entertainment industry.

Since August, a number of celebrities have been censored and punished for their ‘immoral acts’. Popular video blogger Feng Xiaoyi was one of the crackdown targets. Feng’s account on Duoyin, the Chinese version of Tiktok was removed after his video, ‘eating a peach’ went viral online, with some users lambasting him for his makeup and facial expression.

The incident triggered a debate and revived discourse about whether ‘sissies will ruin the nation’. Here is one example posted on the Chinese Quora-liked platform Zhihu arguing for increased censorship:

Niang Pao culture can exist but can’t be mainstream. Just imagine if all the men in our country are acting like this, with such soft-skin eating a peach in such a manner, can our country have strength in a fight? Can we still retain our national spirit?

Chinese regulators expanded the restrictions on the entertainment industry on September 2 to include a ban on unmasculine portrayals. These restrictions include a ban on ‘sissy idols’ on both television and video streaming sites. The regulatory guideline stresses the need to uphold a moral and aesthetic standard in accordance with the country's official values. The ‘niang pao’ ban states:

Hold firm on the principle of cultural confidence, promote the Chinese conventional culture, the revolutionary culture and progressive socialistic culture. Establish the correct aesthetics in programs and be careful in the selection of actors and guests, the presentation of performance and make-up style. Eliminate ‘Niang pao’ and other abnormal aesthetics. Suppress extravagance lifestyle, celebrities’ privacy scandal, negative hot issues, vulgar ‘online celebrities’, aesthetic absurdity and other forms of debased entertainmentization.

Following the ban, many netizens turned online to support the decision. One commentary published on 163.com blames capitalist consumerism for the popularity of ‘sissy culture':

Women’s consumption power has surged thanks to economic and social development. They are more willing to spend on products represented by the kind of male image that they like. This gives rise to ‘sissy idols’. They are handsome and feminine. They can dance and sing. Their make-up is so darling and disgusting. But they are appealing to the ‘big sisters’ …

One pretext for the clampdown of fandom culture is ‘irrational consumption’. Near the end of August, various online platforms banned fan accounts for K-pop star Park Jimin after his Chinese fans crowdfunded millions of yuan to buy Park birthday advertisements in international news outlets and a South Korean airline. Park has also been flagged as a ‘sissy idol’ in some commentaries as he is a spokesperson for a male make-up brand.

The anti-sissy campaign stresses that the right kind of idols should be those who act on behalf of national interest. A popular opinion leader Luo Ye, for example, wrote on Weibo:

Countless evidence has proven that a country can develop without sissy idols, pretty boys, celebrities. But if the country has no scientists, soldiers, technical experts and military strength, it will be bullied.

The discourse is also attached to conspiracy theories accusing the US of cultural colonialization. For example, ‘Bu-Dao-Kuan-Zhai’, a popular writer on Weibo, wrote:

Sissy culture has affected Japan for four generations and South Korea for three generations. The success of the US colonization is built upon the erosion of East Asian men’s masculinity. Does China face the same risk? Yes. Some public intellectuals have turned actor Wu Jing’s wolf warrior spirit into a mental illness. Why? because they want to eliminate Wu Jing kind of masculine image and replace it with a Kris Wu kind of sissy! […] The masculine culture has to be our mainstream value. Man has to be fearless, brave, responsible and dutiful.

In addition to ‘sissy culture’, video games and other modes of entertainment are also considered part of the US cultural imperial agenda. Starting in August, Chinese authorities banned young people under 18 years old from playing online video games on weekdays and restricted access to three hours on weekends.

However, many have continued speaking out against the anti-sissy campaign, claiming citizens should be free to do what they like as long as they don’t hurt or harm others. One pointed out on Weibo:

Sissies will not ruin the nation, the keyboard warriors and the male chauvinists who find women inferior will ruin the country. If they have done no harm to others, they have the right to do whatever they like.

Another put forward a simple question:

Some question how the government is defining a sissy:

If you want to promote masculine style, please begin with a definition. Many males believe that being masculine means smoking, picking fights, arguing with teachers, not handing in homework, making dirty jokes, bullying and cheating on girls. If you do not act like that, you are called a sissy.

Some ridiculed the masculine anxiety hidden in the anti-sissy campaign:

They are banned simply because they are far better. If these idols have become women’s ideal lovers, who would marry them? Unless they are blind.

Prior to the current anti-sissy campaign, the Chinese government suppressed feminist groups in April and LGBTQ groups in July 2021. These widespread campaigns against sexual and gender nonconformity, signal that the values of gender and sexual diversity may be at odds with the leadership's nationalistic vision.