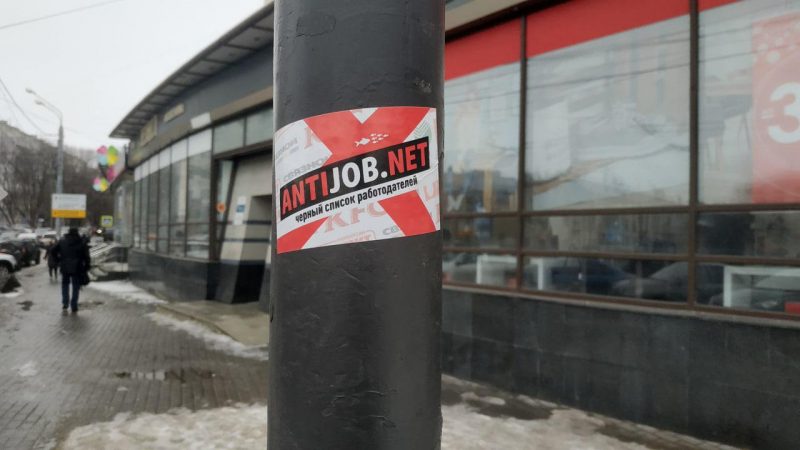 Antijob, run by members of an anarcho-libertarian group, has been operating in Russia for nearly 20 years. Photo courtesy of Antijob.

This article by Thomas Rowley appeared on Open Democracy on September 13, 2021. It is republished as part of a content-sharing partnership and has been edited to fit the GV style.

Russian authorities have blocked a leading website for employee complaints following a successful legal case by a Moscow real estate firm – the latest internet block by the country’s communications regulator.

Antijob, the site in question, has been in operation for 17 years, and hosts thousands of anonymous complaints about Russian employers. Complaints made on the website range from long hours and deceptive management practices to abusive working conditions and wage delays.

The alleged former employees of the company, a subsidiary of leading Moscow property developer PIK, had left reviews that included claims about “unprofessional” conduct by management and mass firing of employees.

PIK Broker stated in its legal claim that this information was defamatory of the company. In its decision on May 4 2021, the Moscow Arbitration Court found that the alleged reviews of PIK Broker were “false”, “defamed [the company’s] business reputation” and were thus banned from circulation in the Russian Federation.

In a comment to openDemocracy, PIK Broker said that it had “taken all possible measures to regulate this dispute outside of court”, but had been “compelled” to defend its reputation in court.

“Russian legislation does not forbid persons from expressing their opinion on working for any organisation,” the company said, “but if that information is false and harms the organisation’s business reputation, then its legal rights and interests should be defended.”

Speaking to openDemocracy, Antijob stated that it faces legal claims by companies mentioned on the website “quite regularly”, but that it “only reacts to direct requests by Roskomnadzor”.

“We get blocked every year or two,” Antijob said. “But this time we launched a mirror site [a replica of a website at a different address].”

“We also get DDoS attacks, poor quality traffic to lower our rating on search engines, apparently, and we also get direct threats of being located by our IP addresses and ‘disappeared’.”

Antijob received 4.5 million views online in 2020 and published 11,000 new complaints about Russian employers. The project was originally set up by members of a Russian anarcho-libertarian activist group, Autonomous Action, and aims to “give a voice to those who are often deprived of it.”

“From the very beginning, we’re on the side of workers in their conflicts with employers.”

“It’s rare that someone hears the opinions of current or would-be employees at a company – and only if a really bad situation has occurred,” the project told openDemocracy. “Employers often have lawyers working for them, lots of resources, paid articles in the media and advertising. This is why we collect these reviews […] so that people who are thinking about working for this or that company can see the real situation inside the firm immediately.”

While Antijob says it “cannot guarantee that every review is true,” the project notes that it does operate a system of confirming user identity, and options for uploading evidence of employee claims. “From the very beginning, we’re on the side of workers in their conflicts with employers,” the project said.

The website said that it does not participate in legal cases for financial and security reasons: the identities of project members are not published, and the team said it was “more important to spend its resources on developing the website.”

The alleged reviews of PIK Broker have since been deleted from the Antijob website, but will, the project said, be returned to the website if their users choose to re-upload them with edits.

The blocking of political and media websites has become common practice in Russia over the past decade. Ahead of this month’s parliamentary elections, for example, the Russian authorities have sought to block access to websites controlled by the team of opposition figure Alexey Navalny. Navalny operates an online tactical voting system that recommends voting for a single candidate in order to possibly defeat a candidate allied with the Putin regime.

According to Antijob, the project’s main website should be unblocked in a few days – after it reports to Roskomnadzor that it has deleted the information opposed by PIK Broker.

“This was great PR for the company,” Antijob said. “If they hadn’t sued, then less than 500 users would have found out.”