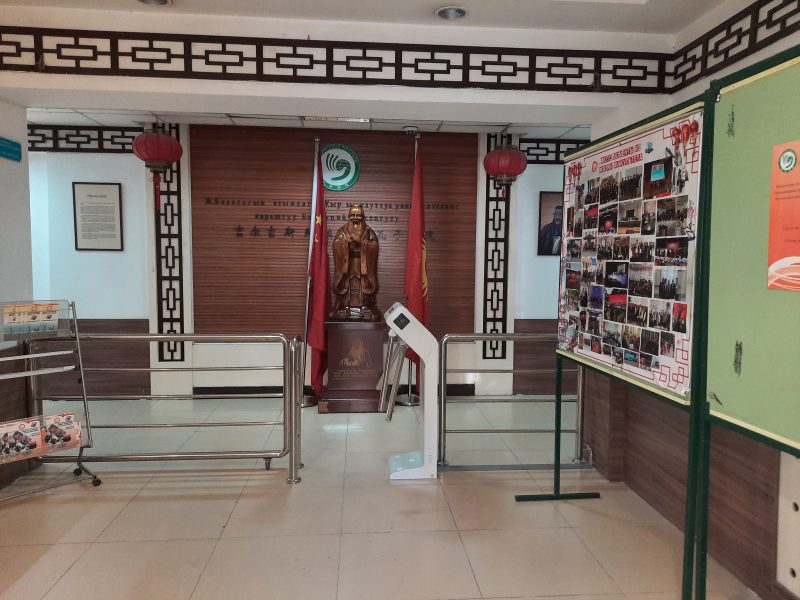 The entrance of the Confucius Institute at the Balasagyn Kyrgyz National University in Bishkek, Kyrgyzstan. Photo by Aizat Shailoobek kyzy, used with permission.

Long isolated culturally and linguistically from each other, Kyrgyzstan and China are now increasing their economic integration as part of the Belt and Road Initiative (BRI). The economic presence of Chinese investors has triggered Sinophobic attitudes among the people of Kyrgyzstan. In recent years, however, the teaching of Mandarin and the greater opportunities to study in China have mitigated the negative views of the neighbor to the east.

Crucial to this soft power strategy is the increasingly widespread presence of Confucius Institutes across Kyrgyzstan. With more than 500 offices around the world, the institutes are hubs for Chinese culture and language. The work of the branches in Kyrgyzstan also contributes to creating a positive image of China among Kyrgyzstani youth.

The Chinese government has provided students with free scholarships to study in China and also helped them to learn Mandarin, which has motivated students to become familiar with Chinese language and culture in an effort to find well-paid jobs.

Globally the first Confucius Institutes were established in 2004. For Kyrgyzstan, a first significant milestone was set in August 2007, when former Chinese president Hu Jintao visited the capital Bishkek and signed a declaration of cooperation which included strengthening education exchanges between the two countries. Consequently, several Confucius Institutes were opened, including one at the Bishkek State University and one at the Kyrgyz National University.

Thousands of students have sat in the Confucius Institute's classrooms in Kyrgyzstan in the 14 years since they opened. One prominent center of learning is Bishkek’s public middle school N. 95, built with Beijing’s assistance, which provides intensive Mandarin classes for children. The school opened in September 2017 and enrolls over 1,000 students every year.

The Chinese language is also becoming increasingly popular in Kyrgyzstan. In 2017, at the Bishkek State University and at the Kyrgyz National University there were around 2,000 university-level students registered to study Mandarin. Before the COVID-19 pandemic, there were more than 7,000 students studying at Confucius Institutes in Kyrgyzstan.

In 2019, before his visit to Kyrgyzstan, China’s President Xi Jinping wrote an op-ed in which he noted the importance of the relationship between the countries in the context of the BRI. He also provided figures on the educational programs linking both countries: in 2018, more than 70,000 people traveled between Kyrgyzstan and China, and over 4,600 Kyrgyz students were studying in China. In 2020, the Ministry of Foreign Affairs of Kyrgyzstan announced that more than 4,000 students from Kyrgyzstan were studying in China.

Comparatively, only about 1,000 Kyrgyz students are enrolled in Turkish universities.

These figures, however, pale in comparison to the high number of students from Kyrgyzstan in Russia. In 2021, former minister of education of Kyrgyzstan, Almazbek Beishenaliev, said that around 16,000 Kyrgyz students are currently enrolled in Russia.

Global Voices spoke to several Kyrgyz citizens who learned Chinese, either in Kyrgyzstan or during educational exchanges in China.

Nurayim Kudayar kyzy, a 26-year-old translator, said that, today, knowing Mandarin is highly valued, because the BRI offers employment opportunities that require some level of Chinese. The company where she works, highly linked to BRI projects, mostly hires workers from China, but also local engineers, road builders, accountants, translators, and other specialists.

Cholpon Asylbek kyzy, who used to work as a translator at the Kara-Balta oil refinery, mentioned that knowing Mandarin helped her to negotiate a higher salary. She added that some of her friends and acquaintances often go to China to work as guides and translators for Russian speaking tourists.

Before the COVID-19 pandemic hit the tourism sector around the globe, Aisuluu Sirazhidinova used to work as a guide and translator in a Chinese tourism company.

Learning Chinese is a unique opportunity for Kyrgyzstani students, who gain language skills and life experience in China. Some students study and work at the same time to help their relatives. In this regard, China has created good conditions for young students from Kyrgyzstan.

Winning a scholarship to study in China is not always easy, students said. Corruption between local students and teachers hinders access even for those who study in the local Confucius Institutes and have a good command of the language.

It's not all good though: An informant who spoke on conditions of anonymity shared her negative experience with teachers in Confucius Institute.

A few years ago, local and Chinese teachers at the Confucius Institute where I studied asked for bribes to select students to go to China. I was told that the fee to pay was between 1,000 and 5,000 USD depending on which city I wanted to go. Despite not paying the bribe, I managed to collect all necessary documents and enrol in a university in Beijing.

Despite the enduring anti-Chinese mood in Kyrgyzstan, it seems that the number of Sinophiles among young Kyrgyzstanis is increasing.