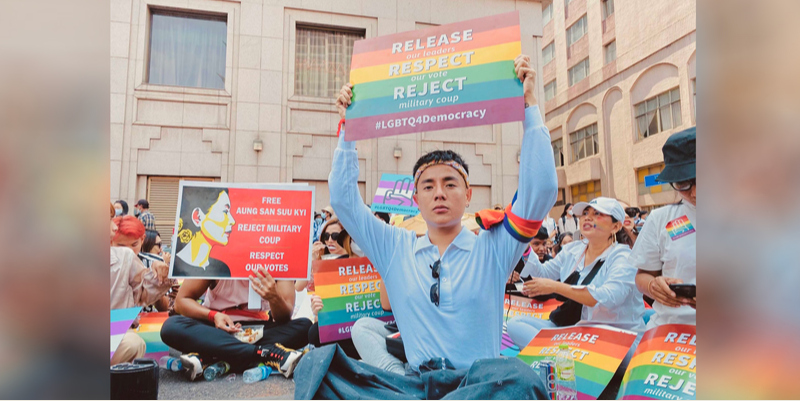 May Oo, a gay celebrity makeup artist, at an anti-regime protest in Yangon in February 2021. Photo and caption from The Irrawaddy, used with permission.

This article was originally published in The Irrawaddy, an independent news website in Myanmar. This edited version is republished on Global Voices as part of a content-sharing agreement.

Until the military takeover on Feb. 1, cosmetics, fashion and beauty design were the most important aspects of May Oo’s daily life.

For more than a decade, he used his skills and passion to transform people’s visual appearance, an activity that turned him into one of Yangon’s most highly sought-after makeup artists. May Oo's customers included celebrities and family members of high-ranking military officials.

“It’s the profession I really love and I see it as a creative art,” said May Oo, who is gay.

But the military takeover that toppled the elected government led by Daw Aung San Suu Kyi’s National League for Democracy (NLD) turned his life upside down.

As a supporter of the NLD government, the 33-year-old opposed the coup.

We can’t accept it. The military stole power from the elected civilian government, which we voted for.

Like millions of others, he joined the anti-coup campaigns that sprung up across the country, and which have ranged from banging pots and pans at night to marching in daily street protests to calling on civil servants to strike. At the same time, he disseminated information on the anti-regime protest movement known as Myanmar’s Spring Revolution through his own social media page, which has 770,000 followers, impressing his customers with pictures of himself with a bullhorn shouting anti-regime slogans at the front of a protest column.

In March, May Oo refused to provide makeup services to well-to-do families planning to attend a junta-organized religious ceremony in Naypyitaw, at which the junta was to confer titles on wealthy persons.

But he has ended up paying a price for his activism.

The regime issued an arrest warrant against him, citing incitement. Soldiers raided his apartment and took everything, including his computer and makeup boxes. “They also destroyed everything in the whole room,” May Oo said. Luckily, he managed to evade arrest.

After the junta’s crackdown against protesters intensified in late March, May Oo was forced to go into hiding in April, because of his involvement in the protests and having provided support to crackdown victims and their families.

As of September 2, the junta had killed 1,043 civilians and arrested a total of 7,768, of whom 6,132 are still detained. In addition, during their raids, junta troops have looted and destroyed property.

While in lockdown during the first and second waves of COVID-19 in 2020, May Oo was able to continue his work, including providing training to amateur artists. He had trained amateurs and young talents in his profession since 2017, when he opened the May Oo Magic Beauty school, as well as leading a makeup team. His salon employed 12 full-time staff and some 60 part-time artists before the coup. 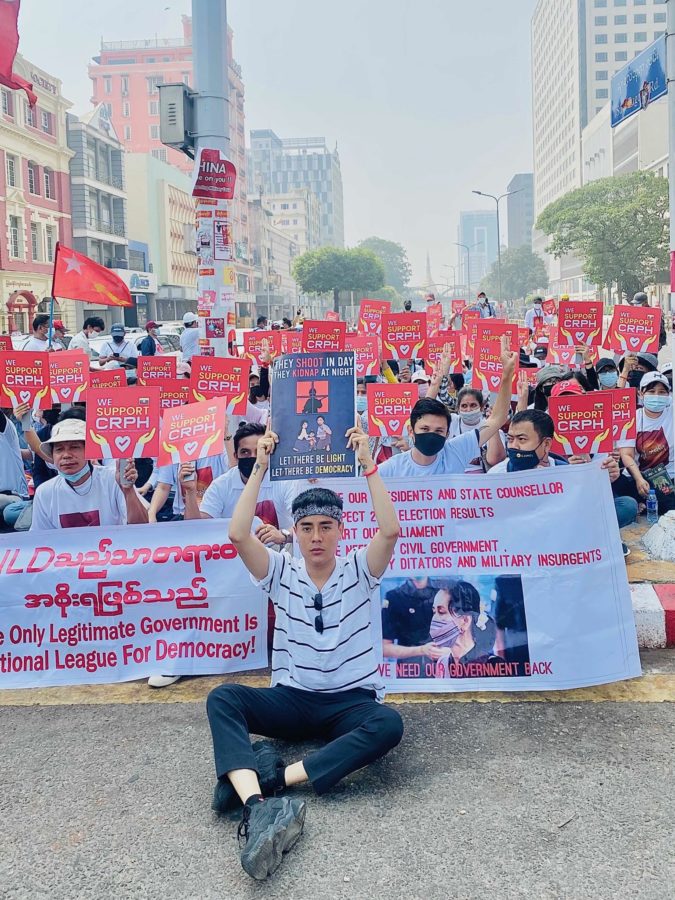 May Oo took to the streets to join the anti-regime protest movement, calling for the restoration of democracy and the release of detained civilian leader State Counselor Daw Aung San Suu Kyi, in Yangon in February 2021. Photo and caption from The Irrawaddy, used with permission.

Now May Oo lives a very different life in border area where he feels safe. (He declined to provide details for security reasons.) He once received weapons training, like other young people determined to topple the regime through armed resistance, but he found that his hands, familiar only with makeup brushes, were not good with guns. Since then, May Oo has devoted his time and energy to other activities, like raising funds for the movement.

I know my strength is not [in military activities], so I choose to support this revolution in whatever way I can. I just see myself as a pillar to help the revolution be victorious.

May Oo admitted that he can’t help but take off his hat to the young women he has seen seriously engaging in military training, adding that seeing them left him with mixed feelings.

I’m sure they never thought they would go through such a hard life. But they see that nothing is more important than ousting the regime. So, they feel immune to all the misery and difficulties they are facing. I feel sad for them but at the same time I feel happy [for the country].

As a gay man who is open about his sexuality, his hopes when voting for the NLD in the November 2020 election were simple: He wanted a government that would respect human rights, including those of the LGBTQ community, which has long faced discrimination in Myanmar.

He told The Irrawaddy that from his point of view, physical and verbal abuse of LGBTQ people decreased under the civilian government.

For a long time, we were insulted for our sexual orientation; but after 2015, we felt less discriminated against, and there were opportunities for makeup artists to choose the path they want.

LGBTQ people are subject to official persecution and discrimination under Section 377 of the Penal Code as well as the Police Act. People who engage in same-sex acts can be punished with up to 10 years in prison. The push for legislative change started under the NLD government, and the LGBTQ community had high hopes for it.

I have suffered discrimination as a gay person since my younger days. I don’t want to experience it again.

It is now nearly five months since May Oo went into hiding. He said sometimes he feels regret, especially when he sees people having fun on Facebook.

That feeling doesn’t last long, though, because I comfort myself with knowing I have done nothing wrong and am taking a stand on the right side.

Asked if he missed his former life as a makeup artist, he said yes and no. He misses it when he thinks of what his life was like in the past.

But when I think about tomorrow under this current situation, I no longer miss it at all, because you can’t guess what will happen next. It’s exciting [to see] what the future will hold for me.