‘If you thirst for freedom, seize it!’: The songs of the Belarusian uprising

Through protest songs, Belarusians stood up to inertia, fear, alienation 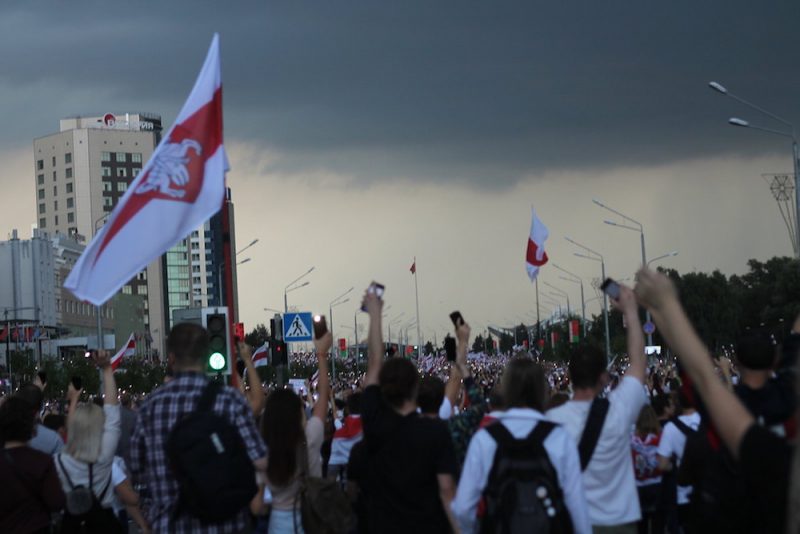 This article by Elena Govor and Raphael Kabo appeared on Transitions Online on September 9, 2021. It is republished as part of a content-sharing partnership and has been abridged and edited to fit the GV style.

Protest, opposition, and revolution always have brought songs in their wake. Even after the revolutions themselves recede into the past, these songs continue to sound. The generations who came of age in the Soviet Union grew up on such songs, taking as fact that lyrics from the Russian revolutions of the 20th century were statements of a clearly delineated polarity set out in “The Internationale”:

We will build a new world, our world,
Those who had nothing will become all.

The songs of protest that have become among the most vital symbols of the 2020 Belarusian revolution are far less simple. The forerunner of these songs is the late Soviet-era rock hit “Khochu Peremen” (“I Want Changes”) by Viktor Tsoi, now more commonly known simply as “Peremen!” Tsoi, wrote the song with his underground rock group Kino in 1986, on the eve of the Gorbachev-era perestroika. The lyrics have a modernist, layered quality, reinforced by a shifting rhythm and use of internal rhyme (sadly not replicated in this translation), which make the song unusual as a rock hit:

Instead of warmth – the green of glass,
Instead of flame – smoke,
A day torn from the calendar’s net.

These lyrics suggest that “Changes!” was written as an expression of self, and as a recognition of a shared feeling among Tsoi’s circle of young friends, who stood on the verge of being drawn into the routine and alienation of adult life.

Cigarette in hand, tea on the table – so the circle closes,
And suddenly we are too frightened to change a thing.

These words are so coded with personal significance that it seems impossible for the song to have become a crowd sing-along. However, its mass appeal lies in its chorus, which transcends the moody lyricism of the verses:

The chorus describes the moment when the subject, drawn into self-reflexive rumination, breaks free of shackles and forms a demand that is collective rather than individual. The subject – not “them” but “we” – is significant in that it does not present an outside force the protagonist must combat to achieve change; as the line reminds the listener, “everything is in us.”

It could be that “Changes!” reached its mass popularity precisely because the revolutions of the last decades have emerged from a desire for an abstract sense of freedom, or, in Russian, volya, with imprecisely defined programs for change, but with a powerful collective yearning to live without falsehood. These political revolutions, including the 2013 Turkish Gezi Park protests, the 2014 Ukrainian Revolution of Dignity, the 2014 Hong Kong Umbrella Revolution, and the 2011-2012 Occupy movement, seek – beyond their equally important, more localized demands – to escape from a world where stability and success are the consequence of living within the unwritten, unspoken rules of the dominant system: being like everyone else, staying in one’s lane.

The 2020 Belarus protests are the most recent manifestation of this 21st century revolutionary lineage. A deeply symbolic trigger for public support for the protests became the state’s press ganging of two young DJs, Kirill Galanov and Vladislav Sokolovsky, into entertaining the audience at a government event hastily organized to prevent a pre-vote rally by then-opposition leader Sviatlana Tsikhanouskaya. Forced to do the state’s bidding, the young men resisted this latest misuse of power by playing Tsoi’s “Changes!”

The song lasted only a minute before the event manager cut the sound system and the DJs were summarily loaded into a police van, but the song, or rather the heavy-handed treatment of the DJs, acted as a catalyst for the crowd. Images of the DJs, hands outstretched and throwing victory signs, captured on hundreds of phones, quickly became a memetic symbol of the dignity and integrity of the “little man.” Meanwhile, the song continued to blare from the speakers of hundreds of cars cruising around Minsk.

In the wake of the DJs’ arrests, as in the time of perestroika, “Changes!” was taken up by Belarusian society as a song of liberation – primarily individual, personal liberation, as intended by its author.

Belarusian opposition figure Siarhei Tsikhanouski popularized another song, “Walls,” which after his arrest also served as a soundtrack for the rallies of his wife, Sviatlana. Its origins lie in a 1968 song by the Catalan singer-songwriter Lluis Llach called “L’Estaca” (“The Stake”). A Russian-language variant of the song by Kirill Medvedev called “Steny” (“Walls”) sounded during protests outside the Belarusian embassy in Moscow after the 2020 August elections in Belarus. The text of the Russian song is close to Llach’s original; however, the symbolic stake to which the unfree are tied is replaced by the more readily understandable symbol of walls; this transformation was likely abetted by earlier metamorphoses into Polish and Belarusian.

The Polish version “Mury” (“Walls”) was written in 1978 by Jacek Kaczmarski, who reworked the text and its philosophical and political message. This song became the hymn of the Polish Solidarity trade union movement. In 2010, during a wave of protests in Belarus, Andrei Khadanovich, a Belarusian poet, translated the Polish variant into Belarusian; the song was titled “Razbury Turmy Mury” (“Break the Prison Walls”). During Tsikhanouski’s presidential campaign (until he was thrown in jail), the complex final stanzas were replaced with more direct, forceful verses.

All versions of the song are united by the melody and the powerful chorus, which calls on listeners to destroy the vertical structures of power through the repetition of “will fall, will fall, will fall.” In the Catalan original, injustice is symbolized by the stake; “l’estaca” is similar in sound to “estat” (government). In the Russian variant the symbol becomes the “long-decaying” walls of prison. Prison walls also feature in the Polish variant, albeit through indirect references. The Belarusian variant returns the prison to center stage.

In these lines, the original concept of the song is brought to its clearest realization. The lyrics are so sparse and dynamic that space is made for a new line added by Khadanovich during the 2010 protests on Independence Square in Minsk, which becomes key to his performance: “If you thirst for freedom, seize it!”

Despite the destructive tenor of the chorus, the overall mood of the song is tragic; the walls ultimately remain standing. In the Catalan and Russian versions this seems to be an objective fact: “the walls will never wear down.” In the Polish and Belarusian versions, the reasons for the continuance of the walls are presented metaphorically:

So a movement of thousands surged up,
A legion of warriors
To topple statues and break the pavement
Into stones.
Each felt that time had come for them
To lend the battle their strength.
Those not with us are against us.

But at this moment, the victorious beat of the Polish song is interrupted by an unexpected conclusion:

… The singer found himself alone.

The 2020 Belarusian variant, at the initiative of Tsikhanouski, was fashioned to be more optimistic: The final tragic stanzas were removed, and two new life-affirming couplets reflecting on contemporary Belarus were added by Alexander Kiss and Sergey Kosmas:

From all Belarus the people rose
To defend their freedom.
Our spirits are moved by one goal:
To dispel the darkness with light.

The song then calls on Belarusians to join the singer in a peaceful march for the eternal ideals of truth and goodness, transforming Belarus into a “land for living.”

Given these changes, Tsikhanouski’s variant of “Walls,” to the tune of which the “people’s president” Sviatlana Tsikhanouskaya won her victory, seems at first glance to have become self-contradictory. It retains its core sense – a celebratory destruction of injustice – and the stirring image of the singer leading the people by the thousands, but the new stanzas address the crowd as a whole, in the third person plural, already assuming that their unity is beyond question. In one of the added stanzas, the authors address the state security forces directly:

Brother-officers, we are one people.
We live in this world together.
Let your conscience make your choice.
We do not want this war.

Despite these apparent contradictions in subject and tone, this version of the song has become wildly successful. No small part of this success, it seems, must be attributed to Khadanovich’s brilliantly simple line “If you thirst for freedom, seize it!”

The women dressed in white with flowers in their arms, who stood in 2020 along the streets of Minsk in silent protest against the overreaches of state power, became a turning point in the Belarusian people’s revolution. They represented victory over fear, individual liberation, a sense of unity, and the birth of a new, free nation. Political scientists and commentators, analyzing the Belarusian protests, have tended to criticize the actions of this period for their lack of a political program and absence of leadership. But precisely these might have been the point of the Belarusian protests: to peacefully and symbolically claim victory over untruth and fear, so that “a bright and sunlit path” would bring them, as Tsikhanouski’s variant puts it, “into a land for living.” One is reminded of the classic words of another Russian bard, Bulat Okudzhava: “Oh, let our aspirations be pure, and the rest will come.”

The final song heard continually throughout the Belarusian protests was “Warriors of Light,” written by Belarusian poet and musician Sergey Mikhalok for his rock band Lyapis Trubetskoy. Written in Russian about a fantasy world unrelated to political events, the song was unexpectedly taken up by the Ukrainian Maidan protests in 2013 and became their unofficial anthem. It was translated into Belarusian by Dmitri Sosnovsky and found its place in the Belarusian protests. Like the other, aforementioned songs, it centers on an explicitly allegorical, symbolic battle between the forces of darkness and light, which “extinguishes fear.”

The song remains the same

In August of 2020, Belarus was full of darkness and light, courage and fear, joy and cruelty. The forces of light were bolstered by the songs they heard and sung – in Minsk as well as in every corner of the country.

A year has passed since those eventful days in Belarus when, it seemed, a peaceful nation could, united, withstand injustice and the dictatorship and win. They did not win and incurred profound losses. One of the most tragic was the death at the hands of the security forces of Raman Bondarenka, a young activist who came out to defend a mural of the rebellious DJs in a suburban Minsk courtyard known as the “Square of Changes.” Occasionally daredevils still organize flash mobs performing “Walls” or Belarusian folk songs and prayers, despite ongoing state repression.

Still, the Belarusian revolution of 2020 has not been completely lost. The Belarusian people today do not long for blood and destruction. Their enemies are altogether different: personal inertia, fear, and alienation. One wants only to believe that the walls soon will fall, and that Tsoi’s magnetic words, “everything is in us,” will at last help the Belarusian people build their “land for living.”