David Axelrod on the ongoing repressions of Crimean Tatar activists 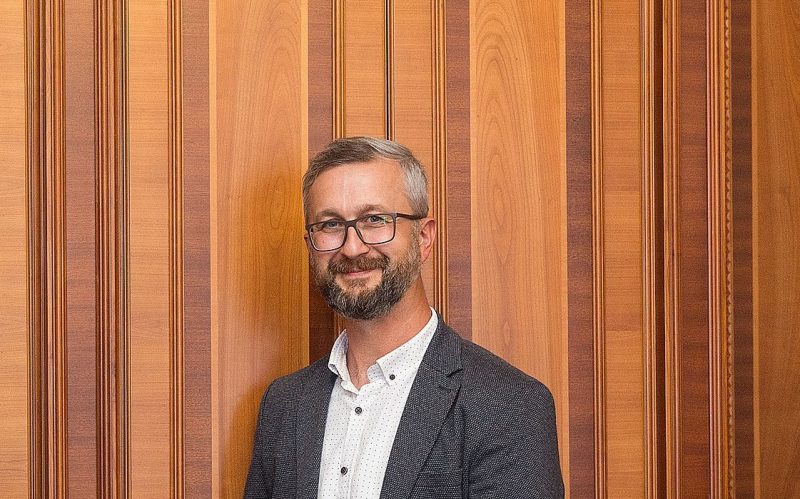 Nariman Dzhelyal in Kyiv, September 2020. Photo from president.gov.ua, CC BY 4.0.

This article by David Axelrod appeared on Open Democracy on September 8, 2021. It is republished as part of a content-sharing partnership and has been edited to fit the GV style.

When Nariman Dzhelyal was detained by Russian security forces on September 4, the Crimean Tatar leader spent the next day “in a basement, in handcuffs and with a bag on his head”, according to his lawyer.

This treatment is, sadly, par for the course since Russia annexed the Ukrainian peninsula in 2014. Since then, the Crimean Tatar community has faced wave upon wave of arrests – often on terrorism and sabotage charges. Dzhelyal, a deputy leader of the Crimean Tatar Meijlis, a representative body banned by Russia, had only recently returned from an international summit devoted to Crimea when he was arrested at his home on Sunday.

The Crimean branch of Russia’s Federal Security Service (FSB) claims that a group including Dzhelyal is responsible for damaging a gas pipeline close to a Russian military base outside the city of Simferopol.

In response to the arrest of Dzhelyal and others, dozens of people gathered outside the FSB headquarters in Simferopol to demand information about Dzhelyal and the other people detained inside – their friends and relatives. Within a matter of minutes, Russian security forces had detained over 40 people, with some escorted to the nearby police wagons, and others roughed up and beaten, according to eyewitnesses.

This is not the first case connected to alleged sabotage and espionage in Crimea. Members of alleged sabotage groups have been detained by the FSB in recent years – and these arrests have been accompanied by allegations of torture. Earlier this year, a journalist for Radio Liberty, Vladislav Esipenko, was detained on espionage charges in Crimea – and claimed that he was tortured by the FSB.

A life in Crimean politics

After graduating from university, Dzhelyal worked in local newspapers and television, and then, according to friends, decided to run as a delegate to the Qurultay, the national parliament of the Crimean Tatars.

Dzhelyal rose to public prominence after Russia annexed Crimea in 2014. In the aftermath, the local authorities banned Crimean Tatar leaders Mustafa Dzhemilev and Refat Chubarov from entering the peninsula and opened a number of criminal investigations against them.

As a result, Dzhelyal – who regularly spoke about the situation of the Crimean Tatars to journalists and international human rights organisations – became one of the most prominent activists on the peninsula. Online, Dzhelyal regularly published information about the actions of the Russian security forces against Crimean Tatars – as he had done on the day of his arrest.

“He never concealed the fact he did not recognise the annexation of Crimea”, said Nikolai Polozov, Dzhelyal’s lawyer, “but at the same time he always spoke very calmly, diplomatically, and in a balanced way. He never sounded any sharp calls for radical action. Nariman has always insisted on exclusively peaceful methods for his struggle”.

In a letter published by his lawyer on September 8, Dzhelyal wrote:

All the searches, interrogations and prison cells don’t particularly worry me. I expected this to happen for a long time. What surprised me was that they chose ‘Sabotage’. I never thought about doing that kind of thing. That’s not my method. But that’s how it turned out.

Crimean lawyer Emil Kurbedinov, who specialises in political cases, said he was perhaps the last person who spoke to Dzhelyal before the FSB searched his home.

On the night of September 3, the activist had called Kurbedinov to say that the security forces had begun a search at the homes of his neighbours, Aziz and Asan Akhtemov. A few hours later, the FSB began searching Dzhelyal’s home too.

At that time, Dzhelyal was formally only a witness in the FSB’s investigation into the gas pipeline incident. Nevertheless, he was removed from his home with a bag over his head, Polozov said, and was only able to speak to his lawyer after he was declared a suspect in the case.

The FSB alleges that Dzhelyal is an accomplice in carrying out sabotage on a gas pipeline in the village of Perevalnoye, located a few kilometres southwest of Simferopol. According to the security services, the group that organised the explosion included at least two more people: Aziz and Asan Akhtemov, Dzhelyal’s neighbours working as a mechanic and a driver.

In a video published by the FSB, the Akhtemov brothers say on camera that they were instructed to blow up the gas pipeline by a Ukrainian military intelligence officer, whom they met in the city of Kherson, in southern Ukraine, in June this year. Similar confession videos followed an FSB investigation into another alleged sabotage plot in Crimea in 2016.

Dzhelyal, according to the FSB, was the link between the Akhtemovs and Ukrainian military intelligence. It was Dzhelyal, the FSB claims, who gave the phone number of the Ukrainian intelligence officer to the Akhtetovs – and, allegedly, he did so knowingly.

Dzhelyal’s defence has decided not to testify, and declined to comment on information about whether the activist had passed the phone number of a Ukrainian intelligence officer to his neighbours.

The Crimean authorities have already expressed support for the investigation into the gas pipeline incident.

“All this proves once again that the activities of agent provocateurs from the [Crimean Tatar] Meijlis and their supporters are part of a hybrid war launched against Russia”, head of the Republic of Crimea, Sergei Aksenov, said.

Like Nariman Dzhelyal, Aziz and Asan Akhtemov were detained immediately after their homes were searched on the morning of September 4. Throughout the day, lawyers who had signed an agreement with their relatives attempted to find their clients in holding prisons across Crimea, but without success.

Kurbedinov is sure that the Akhtemov brothers were tortured throughout the day, and that the result of this torture is the FSB’s now published video of their confession. Prior to the detention hearing, the brothers refused independent legal counsel.

Safie Shabanova, a lawyer who managed to see the Akhtemov brothers, claims that they were frightened when she visited them, though she was able to communicate with them only in the presence of an FSB investigator, Vitaly Vlasov – coincidentally, the same investigator responsible for the case against journalist Vladislav Esipenko. Shabanova and the Akhmetovs were not given time and space for confidential communication.

The FSB has not commented on the suspicion that the Akhtemov brothers were tortured.

In addition, the FSB also detained two other men: Shevket Useinov, a resident of Yevpatoria, and Eldar Odamanov of Simferopol. The latter was arrested on September 3, and no information was received about him for more than a day.

Lawyers, citing the two men’s relatives, said that the searches in their homes were also carried out as part of an investigation into the sabotage of the gas pipeline. As a result, Odamanov and Useinov were sentenced to 14 and 15 days of arrest, respectively, for resisting police officers.

“Frankly, I’m not sure that [Odamanov and Useinov] will be released”, said Kurbedinov. “Security officials have two weeks of uncontrolled access to them, so I would not be surprised if they eventually also become involved in this case”.

The gas pipeline near the village of Perevalnoye military base was damaged at the end of August, according to media reports. According to the Crimean authorities, this pipeline was not used to supply Perevalnoye itself.

Crimea’s Ministry of Internal Affairs reported on August 23 that experts inspecting the pipe had drawn conclusions that the damage “may have occurred as a result of the unlawful actions of unidentified persons”. Initially, police opened a criminal case into “deliberate destruction or damage to property”, without any reference to sabotage.

The local authorities in Perevalnoye refrained from categorical statements. “I am not an expert in what could cause damage to the pipe”, village head Oleg Litvinenko told local media at the time.

According to Nikolai Polozov, Dzhelyal’s lawyer, an analysis of news published around August 23 indirectly indicates that there might not have been an explosion at the gas pipeline at all. “The damage, in theory, could have arisen from a variety of reasons, including heavy wear and tear”, he said.

openDemocracy's analysis of posts and comments in 11 local social media groups in Perevalnoye and surrounding villages for August 22-24 found no mention of the gas pipe explosion, which, hypothetically, could have been heard by local residents.

Dzhelyal’s associates believe the case against him could be linked to his recent participation in the Crimea Platform summit, an official Ukrainian diplomatic initiative held in Kyiv in late August. In the words of its organisers, it is designed “to return the Crimean issue to the international agenda and to facilitate the return of Ukrainian control over Crimea”.

In particular, Dzhelyal’s friends refer to the reaction of Georgy Muradov, Crimea’s deputy prime minister, on the eve of the summit. The summit, Muradov said at the time, “will, like a boomerang, come back to hit the people who thought it up and who will try to implement it”. The Russian Foreign Ministry called the summit “a Russophobic, artificially created action”, as well as “an empty propaganda undertaking that has no prospects”.

According to activists, Dzhelyal was not the only Crimean Tatar politician who visited the Crimea Platform summit – he travelled to Kyiv as part of a group of several people. Zair Smedlya, Dzhelyal’s friend, said he believes that one of the goals of the Russian security forces is to “behead” the Crimean Tatar movement, and that all those who were present at the summit “are also expecting to be arrested”.

“Nariman is both the brains and the mouthpiece of the [Crimean Tatar] national movement, and the person who is able to rally people around him”, Smedlya said.