An artistic performance against bulldozers became a powerful protest tool. 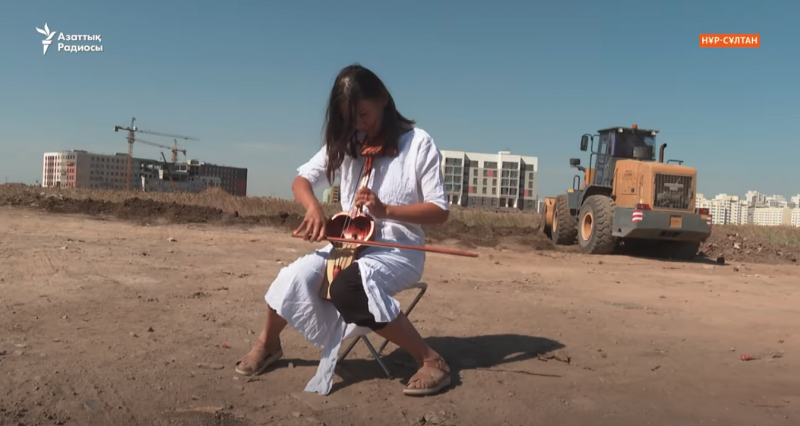 In the background, cranes erect new buildings in the ever-growing periphery of Nur-Sultan, Kazakhstan's capital city. Against that backdrop, on the drying grounds of the water reservoir of Malyi Taldykol, a surprising battle scene takes place: artists dressed in traditional Kazakh clothes and playing traditional Kazakh instruments face off with bulldozers and construction crews.

On September 7, after activists had discovered that the city administration would go ahead with its construction plans at the reservoir, they decided to enact a protest.

Aigerim Ospan and Askhat Akhmedyarov, two renowned contemporary artists, with the help of some of the long-time campaigners of the informal SOS Taldykol organization, staged a symbolic performance, standing with open arms across the path of the bulldozers called in by the construction company.

Ospan played the kobyz, a traditional string instrument, right in front of the blade of a bulldozer, its engine scoffing while her notes resonated around the crowd of workers, activists, and journalists.

For months, activists have tried to draw attention to the worrying decay of water resources around the capital. In March, artist Aisuluu Shaikenova placed dozens of ice figurines of birds in the capital's main boulevard. Their slow melting was supposed to be a metaphor for the progressive depletion of Kazakhstan's bodies of water.

In the summer of 2020, after the government announced it would build a park in the site of Malyi Taldykol lake, activists formed the SOS Taldykol initiative.

In response to public pressure, last December, Altai Kulginov, the mayor of Nur-Sultan, said that the lake would be preserved.

No one will touch the lake. In fact, this is a water accumulation, not a lake. People commonly call it Malyi Taldykol. We will create a recreation zone near Lake Taldykol [the nearby lake] with landscaping and walkways for people.

In the summer of 2021, however, bulldozers came to the Malyi Taldykol and started construction work, triggering more protests from the activists.

The main issue with the reservoir is that its water has been progressively drained, damaging its ecosystem. The growing need for land for real estate in the outskirts of the capital had made Malyi Taldykol a target for new developments.

Ruslan Urazaliyev, a researcher at Kazakhstan's Biodiversity Association, told news channel 24.kz that the real estate development plans will be counterproductive for the environment around the reservoir.

There is an aggressive construction plan for the territory, which used to be wetlands. This goes against both environmental legislation and common sense. New residential complexes, a school, and other facilities will appear here.

The resonance of the protest-performance, which reached high visibility on social media in Kazakhstan, could perhaps push the authorities to review their construction plans. Or so the activists hope.