Several members of the HK Alliance were arrested 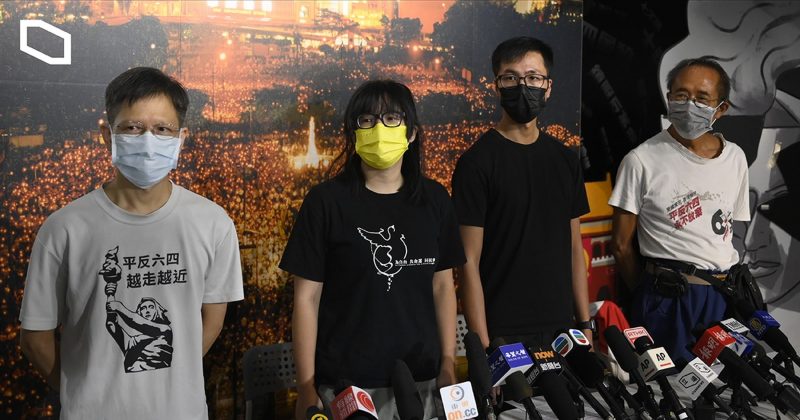 Committee members from the HK Alliance in a press conference on September 6. Image via Stand News. Used with permission.

The Hong Kong Alliance in Support of Patriotic Democratic Movements in China (HK Alliance), the host of annual vigil commemorating the 1989 Tiananmen Massacre, is being investigated under Hong Kong's national security law after the police labelled the group a ‘political organization’ and a ‘foreign agent’ on August 25, 2021.

The Alliance rejected the labels and refused to provide information that police officials requested. Citing article 43 of the national security law, the police accused the HK Alliance of being a ‘foreign agent’ and demanded the HK Alliance hand over information about its executive committee members, their identities, the group's income sources, activities and meetings since 2014.

The Hong Kong-based New School for Democracy and China Human Rights Lawyers Concern Group also received similar requests from the police. Both organizations asked the police a deferment in response to the requests.

On September 8, the police arrested at least four HK Alliance committee members for refusing to turn over the information and failing to comply with the national security investigation request. The news outlet 852 Spirit reported on Twitter:

On September 7, the HK Alliance presented a letter to the national security authority, stressing that the group is not a foreign agent and that the police authority’s demand violates the principle of  ‘reasonable doubt‘, a legal standard of proof. On the same day, the HK Alliance also filed a judicial review over the police action. APF Hong Kong co-respondent Xinqi Su reported on Twitter:

It wasn’t long before the HK Alliance reps finished handing in their letter and leaving the police HQs. Chow Hang-tung @zouxingtong said police warned they should follow the law and she told them to do the same. “It only applies to foreign agents, not any random target,” she said pic.twitter.com/0Z255AXYJL

Barrister Chow Hang Tung, the vice-chairperson of the Alliance, explained the rationale behind the group's decision more thoroughly in an article published by Stand News on September 3. She called the police’s request for the group’s internal documents a ‘fishing expedition‘ to construct stories and conspiracies against civic groups and to invoke fear by labelling the group as ‘foreign agents’, which has a vague and arbitrary definition.

Chow expressed her concern that nearly any organization can be categorised as a ‘political organization’ if they are pursuing policy changes:

What about labour unions that defend workers’ rights, will they be considered pursuing political ends? What about churches that pursue social justice and poverty alleviation? What about groups that work on education, gender equity and rule of law? … And those internet giants and business associations that spend a huge amount of resources to promote policy change?

Chow also pointed out that when a civic group is labelled as political, then it can easily fall into the category of ‘foreign agent’, while international organizations which are based in Hong Kong could easily fall into this legal trap:

Local organizations which receive funding support or have collaboration with overseas organizations would also be subjected to similar political harassment, Chow noted.

The Security Bureau and the Police Force, however, insisted that their power is in accordance with the principle of the rule of law and vowed to take action against the HK Alliance.

HK Alliance was founded in 1990, one year after the bloody crackdown of the Tiananmen student movement in 1989. It is a coalition of more than a dozen civic groups. The organization's mission is expressed in its name, the Hong Kong Alliance in Support of Patriotic Democratic Movements in China.  Since its establishment, it had organized the annual candle night vigil on June 4 to commemorate those who died during the Tiananmen Massacre. In 2020 police banned the vigil citing concerns about the pandemic.

As pointed out by Chris Yeung, the chief editor of Hong Kong-based CitizenNews, the Alliance has always been a domestic patriotic movement to build a democratic and open China, the ‘foreign agent’ label is at odds with Hongkongers’ experience.

For many Hongkongers who had gone through the journey of the ill-fated pro-democracy movement spearheaded by the Alliance in the past three decades, the police’s accusation of the Alliance being a “foreign agent” has defied their knowledge, understanding and experience.

To say those tens of thousands of people who paid tributes to the June 4 victims on every June 4 as part of a plot by a “foreign agent” aimed to endanger national security is an insult to their conscience, to say the least.