'Things are getting better but there's definitely more to be done' 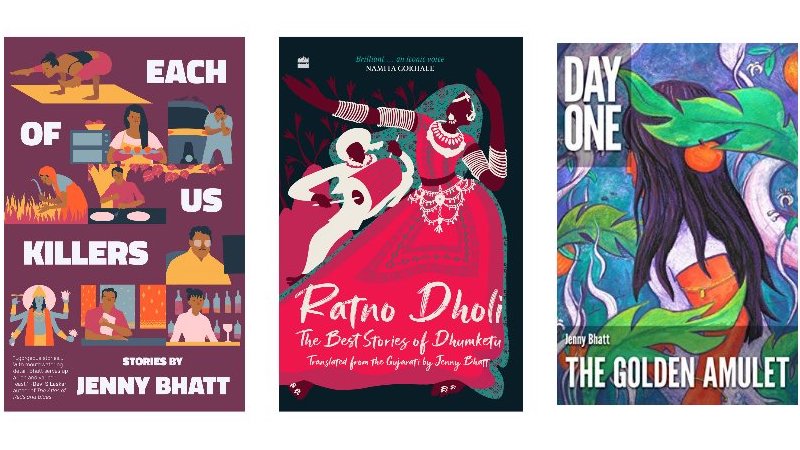 Covers of books Jenny Bhatt has written and translated. Used with permission.

According to Indian American writer, literary translator and book critic Jenny Bhatt, only a small percentage of books from different South Asian languages find their way to international readers, especially in the United States market.

Bhatt teaches creative writing at Writing Workshops Dallas, leads Desibooks, a global multimedia forum that showcases South Asian literature and connects readers and writers through conversation and community. Her debut story collection, ‘Each of Us Killers’, published by 7.13 Books, won a 2020 Foreword INDIES award in the Short Stories category and was also a finalist in the Multicultural Adult Fiction category.

Global Voices interviewed Bhatt about her most recent literary translation via email, and discussed South Asian literature's prospects in the international market. 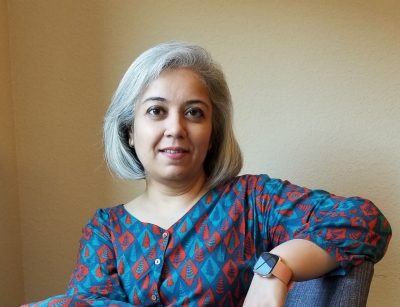 Global Voices (GV): Tell us about the experience of translating Dhumketu’s stories.

Jenny Bhatt (JB): This was my first book-length translation of a writer's work. Before that, I'd translated the odd short story for family members but nothing beyond that. For this project, I read approximately 600 short stories by Dhumketu [the pen name of Gujarati writer Gaurishankar Govardhanram Joshi (1892-1965)] to select the 26 or so for the collection. This was a long process.

I also learned a lot along the way about the craft of literary translation. I'm still learning, I believe. The commercial side of things was a steep learning curve as well, in terms of getting copyright permission, etc. I started the book project in 2017 and the book finally launched in 2020. So, beyond the craft and commercial aspects, I learned the art of patience and self-discipline to stay on course despite setbacks.

GV: How was your publishing journey?

JB: The publishing journey for the translation was educational, for sure. I didn't start out with the idea of doing a book-length translation. I was actually querying an agent in India for my own short story collection [‘Each of Us Killers’ came out in the United States in 2020]. In my email, I'd mentioned how I was also doing a bit of translation work. The agent called me within the hour, keen on the translation.

Then began the long process of getting copyright permission, getting a publisher, actually completing the translation, editing it, etc. The thing that no one had predicted or anticipated was, of course, that the book would launch during a global pandemic. So that added more challenges, as I was in the US while the book was being released in India—and the world was just getting used to going all virtual with book events. So, anyway, as I tell people, all of us who had debuts during the global pandemic are now prepared for pretty much anything as far as book launches go.

GV: Tell us about the podcast you run.

JB: Desi Books focuses on books from or about South Asia. I find that, particularly in the [West], our books are not given their due attention. The desi [a word used to describe the people, cultures, and products of the Indian subcontinent and their diaspora] books that do make it big are often those that check off certain boxes for western gatekeepers and critics, that confirm certain stereotypes and biases people have about South Asia. So my goal is to spotlight the amazing diversity of our literary traditions. And, as I always say, a rising tide lifts all boats. In the end, our literary culture is that much richer and stronger if we all support and uplift each other.

Finally, I want to do and be more of what I'd like to see in the world. So, if I want to see more diverse South Asian books being accepted and read, I need to do my bit of literary citizenship toward that. I find it more productive to put out positive energy through this kind of work than to just complain about the problems I see across the literary landscape. Right now, it's a solo venture because I can't afford to pay anyone, but I'm hoping to find some funding options so I can pay a couple of folks to do interviews and reviews. Let's see.

GV: Are any of your new publications coming out soon? What are you working on currently?

JB: These days, I'm working on a novel as my longer-term project. But I do have ongoing book reviews and short story translations coming out on a regular basis. [My creative writing class] takes up a good part of my working day. And, of course, there's the podcast, which takes a certain amount of time on a weekly basis. But all of this, for me, is part of my writing discipline. I see them all as different and necessary parts of my writing life. And I'm very grateful to be able to do all of these things.

GV: As a South Asian literature campaigner, how do you see its presence in the world market?

JB: It's been getting better over time. But, in general, there's this tokenism that often takes place. Some new writer gets crowned as ‘the’ South Asian writer of our time. And then, all the western literary gatekeepers want more of the same. For the longest time, this was Jhumpa Lahiri. She's a terrific writer, but she does not and should not be held as representative of ALL South Asian literature. Or, the books that get rave reviews are those that exoticize or erase aspects of our cultures that somehow don't fit the generally accepted biases out there. Again, I believe things are getting better but there's definitely more to be done.

GV: What suggestions do you have for translators and writers who want international publishers?

JB: I'll be honest that literary translations in general—and those from South Asia, in particular—are not popular enough in international markets. I believe it's best to start with a publisher in South Asia and, once the book has had a bit of success in this region, then try for international publishers. Mostly, you'll have to research and query with publishers who specifically want to take on translations and have some track record of having published South Asian translations.

In my case, my Indian publisher, HarperCollins India, had global rights for my translation. So they pitched my book, along with a few other titles, to a US publisher. I did not have to get involved with the negotiations and such—and, to be honest, that's all good with me. It takes a lot of time and effort to do all of that on your own. Another option is to translate shorter works and submit them to literary magazines. That can help build a publication history which, especially in the international market, carries some weight.

Bhatt's writing has appeared in various international newspapers and publications. Having lived and worked her way around India, England, Germany, Scotland, and various parts of the US, she now lives in a suburb of Dallas, Texas.