Resisting the coup and the patriarchy: An interview with Myanmar's feminist activist Nandar

Nandar is promoting women's rights in Myanmar even in exile 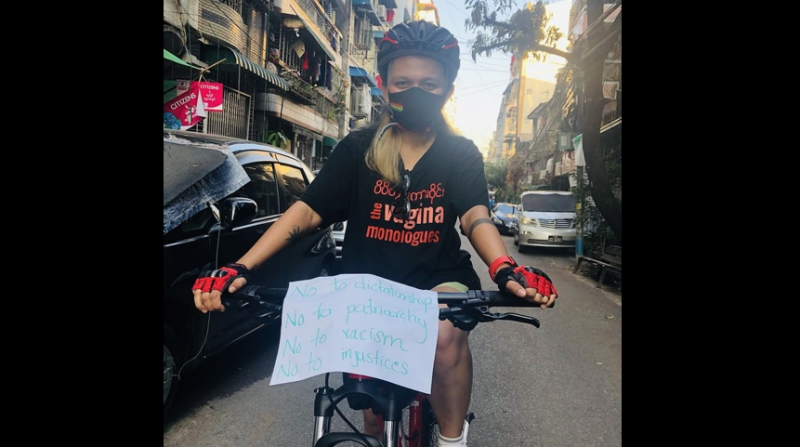 Nandar during an anti-coup protest in Myanmar. Source: Twitter

Citizens from all over Myanmar mobilized to form the resistance against Myanmar’s military government, including, unsurprisingly, artists and feminists. One of these resisters is prominent women’s rights advocate Nandar.

Nandar founded the Purple Feminists Group, co-directed a production of The Vagina Monologues in Myanmar, and translated a Burmese version of Chimamanda Ngozi Adichie's book “We Should All Be Feminists.” Her podcasts “Feminist Talks” and “G-Taw Zagar Wyne” tackle topics affecting women in Myanmar.

In recognition of her work, she was included on the BBC’s list of 100 most influential and inspirational women around the world in 2020. She is shortlisted for the Index on Censorship's 2021 Freedom of Expression Awards.

She was on the frontlines of the protests during the early weeks of the coup until an intensified government crackdown forced her to return to her village in northern Myanmar. She left the country in March but continued to oppose the coup while promoting women's empowerment.

In a virtual interview with Global Voices, Nandar recalled the difficult transition she faced after leaving Myanmar

…choosing to get out was a very difficult choice-emotionally and physically. It was such a painful process with the COVID-19 restrictions and all. As soon as I got out, I started working so much that at one point, I wasn't taking care of my own mental and physical health. I felt extremely sick many times but kept working. Most parts of this also were fueled by survivors’ guilt and [the] grieving process that I was going through heavily after leaving the country. 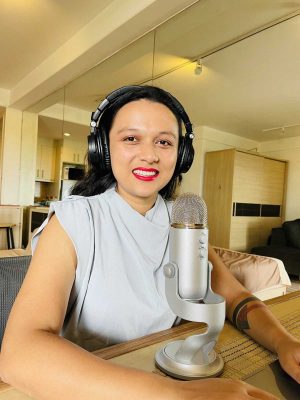 The coup hasn't stopped the Purple Feminists Group from continuing their advocacy work, and though they can't run the same programs they used to, they are still finding ways to promote peace and women's empowerment through literature, podcasts, and a virtual workshop series. They plan to hold a feminist literature competition and are running a self-care campaign to raise awareness on mental health in Myanmar. They also created a “writing to heal” workshop series to teach people how to use writing to cope with trauma and mental health issues.

She underscored the vital role that women and feminists have played in challenging the coup:

With the help of digital and internet advancement as well as the progress that the feminists in Myanmar have made, women in Myanmar gradually realized that hiding their ability to do things will not necessarily help their society or the country. Therefore, it is time for them to be themselves. That's when the game changed, I would say. When women and girls decide that they are part of this community that has been taken away and ruled by dictators. So, they must do something about it.

I remember asking random women in the protests about why they think they should be here in the protests along with these men and if the politics is really for women out of curiosity of getting their insights, they said this beautifully which I think can answer your questions about how and why it is valuable that feminists and women are challenging not only the dictatorship system but also the patriarchy system. They said, “if the country is continued by the dictators, it is not just the men who would suffer, we would also suffer under it. That's why it is important for women to be part of this revolution.”

In a webinar hosted by the Association for Women's Rights in Development, Nandar talked about how feminists are calling out the feudal mindset of some anti-coup protesters:

Even among protestors, as I was mentioning, women are judged for how they are dressed during the protest by male protestors. [They are] being questioned about how they are dressing while protesting. I think these are irrelevant questions to be asking while standing up for democracy. You are not supposed to question a female body, whatever she is wearing or however she is protesting. It’s solely her body. There has to be freedom for women to be themselves and to protest. So I think this is something women have to go through, specifically for being women. These problems should be highlighted by the media as well.

Nandar shared how the international community can support Myanmar and the pro-democracy movement:

She also has a message to donors and international agencies which are providing assistance to groups and individuals in Myanmar:

Donors must learn to design their funding to have room for flexibility so that feminists who are working in the crisis using the fund don't have to go through painful procedures and time consumptions to get the funding so that they can do what they need to do. The donors must take responsibility to do better with their funding design.