One survey suggests 33 percent support for government; 6.4 for opposition 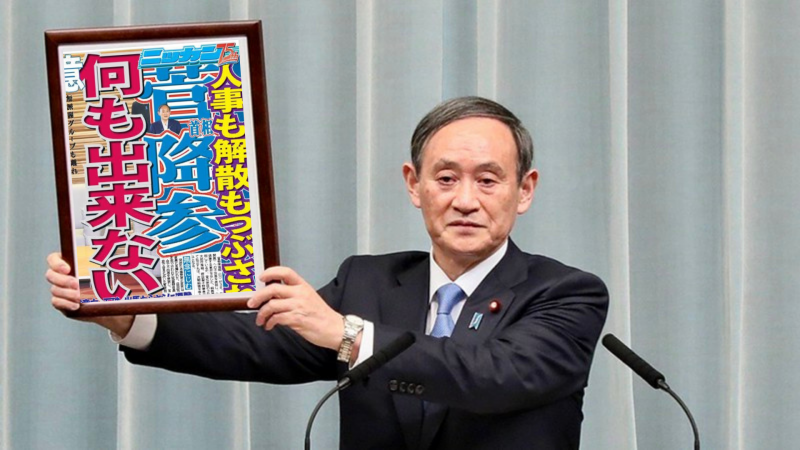 Placard caption: “Suga surrenders!!!” Suga Yoshide, who, as chief cabinet secretary, announced the naming of the new Reiwa era on April 1, 2019, announced he would resign as prime minister on September 2, 2021. Image remixed by Nevin Thompson.

After a summer dominated by an “unusual” Tokyo Olympics that played to virtual spectators amid a surging pandemic, by late August—with national elections just around the corner—Japanese Prime Minister Suga Yoshihide and his ruling Liberal Democratic Party (LDP) found their popularity waning. Even so, a series of own goals by opposition party figures mean there is little chance of a change in government.

After approval ratings cratered post-Olympics—by August 8, just 29 percent of Japanese voters approved of the government, versus 52 percent disapproval—a beleaguered Suga effectively gave up after less than a year as prime minister. On September 2, after weeks of dithering, Suga announced he would not run in an LDP leadership vote scheduled for later in the month, paving the way for a new prime minister to lead the party into elections, which are carded to happen before the end of October.

Suga became prime minister on September 16, 2020. A successor to—and protege of—Prime Minister Abe Shinzo, Suga has been unpopular with voters for a variety of reasons, all to do with how his government has responded to the pandemic. Vaccine rollout in Japan has been perceived to be haphazard and slow. Fears that COVID-19 cases would spike during and following the Olympics were largely realized, as infections and hospitalizations skyrocketed across Japan, with no apparent government plans to deal with the situation.

Even Team Japan racking up a record number of medals at the Olympics could not change the electorate's opinion. Yet, despite dissatisfaction with the current government, opposition parties are also unpopular with voters.

In a public opinion survey conducted by NHK (the Japan Broadcasting Corporation), about 33 percent of voters supported the governing LDP. In contrast, just 6.4 percent of respondents said they supported the Constitutional Democratic Party (CDP), the single-biggest opposition party in the Japanese National Diet.

Public distrust of parties like the CDP could be linked to recent odious and anti-science remarks made by some opposition figures. In May 2020, for instance, during discussions among opposition figures about revisions to sex crime laws, CDP member Honda Hiranao remarked that he thought it “strange that he might be arrested if he had sex with a 14-year-old girl who consented to the relationship.” The current Japanese Penal Code sets the minimum age at 13.

Honda apologized, resigned from the party, and announced he would not run in the upcoming election, but the damage was already done. The Japanese Communist Party (JCP), traditionally a highly popular regional party that has said it would be open to cooperating with the CDP to defeat the incumbent, attempted to do damage control. Koike Akira, a senior JCP leader, tweeted:

The United Nations has recommended that the age of consent for sexual intercourse, which is under the current criminal law, be raised. We should also listen to the victims of sexual violence. In any event, the age of consent should be raised to “over the age of 16 years,” following the completion of compulsory education. [Honda's] remarks are outrageous, and should be severely condemned.

Japan's political landscape has been dominated by the LDP-Komeito coalition ever since its defeat of the Democratic Party of Japan (DPJ) in the 2012 general election. The DPJ broke up following the election, splintering opposition parties at the polls, and allowing the LDP-Komeito to continue in government.

Meanwhile, the Constitutional Democratic Party (CDP), heir to the DPJ and theoretically waiting to take over from a weakened LDP, struggles to avoid gaffes. Following the disgrace of Honda after his comments about sexual consent, another CDP legislator was called out for online disinformation campaigns amid the pandemic and a public health crisis.

As reported in July by Yahoo! Japan News, Buzzfeed, and other sources, Kitajo Tomohiko, a CDP electoral candidate, used official CDP campaign materials to share misinformation about vaccines on Twitter. Kitajo claimed that “mRNA vaccines can cause infertility among females” and “the Pfizer vaccine has no efficacy against [the] COVID-19 virus.”

After online backlash from well-known doctors about the inaccuracy of his statement, Kitajo deleted his tweet and apologized for conflating his personal opinion with the stance of his party. Yet, he continues to express his controversial views about COVID-19 vaccines, along with other opposition anti-vaxxers—including Aoyama Masayuki, formerly of the CDP but now a member of the Japan Restoration Party (JRP), an independent faction. Aoyama Masayuki, who once sits on the parliamentary Committee on Health, Welfare and Labor, often tweets anti-vaccine misinformation while picking fights with doctors.

As such, while Suga joins the ranks of Japan's “revolving-door” prime ministers, the LDP-Komeito government appears safe to continue on, despite the misgivings of the electorate.