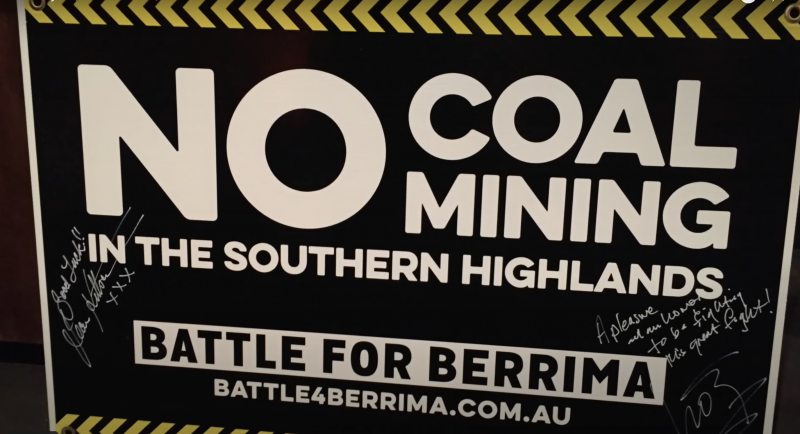 A screenshot from the Battle For Berrima Inc. video Hume Coal and Its Plans For A New Coal Mine In Berrima 2015

Environmentalists are celebrating a victory over a proposed coal development in the Australian state of New South Wales (NSW) after 11 years of debate and community protests. The Independent Planning Commission (IPC) for the NSW Southern Highlands blocked the plans for the proposed mine, saying the potential impacts of the project were ‘too great to be reasonably managed, and the social risks to the community are high.’

Korean-owned Hume Coal proposed applied to build the coal mine in Berrima. The company argued that the mine would ‘create 300+ jobs for locals’.

The full IPC determination and background materials are available here. The review followed an earlier rejection by the Department of Planning, Industry and Environment.

The IPC identified a long list of issues raised by the project's opponents, including:

According to the Lock the Gate Alliance, a national grassroots organisation concerned with risky coal mining, coal seam gas and fracking, the mine would have emitted a massive amount of greenhouse gasses:

If it had been built, the Hume Coal project would have been responsible for more than 106 million tonnes of greenhouse gas emissions over its lifespan.

There have been local concerns since permission was granted to drill exploration holes in 2010. High profile supporters over the years have included singers Leo Sayer, Cold Chisel's Jimmy Barnes and actor Nicole Kidman, who owned one of the 424 properties that would have been affected by the mine.

This video has an interview with Sayer, a local resident in 2015:

Sayer also made a statement for the public inquiry in June 2021:

…the mine is a danger to health, clean air, farm produce, and the nature of the Southern Highlands and the peace and quiet of this historically natural area.

Jimmy Barnes, who is another longstanding local, also made a written submission.

There has also been opposition from local small business groups such as the Moss Vale Rural and Chamber of Commerce. Their president, restaurateur and farmer Brigid Kennedy, was very pleased with the result, arguing that it would give businesses hope.

I think I have held my breath for 10 years and I feel I can finally let it out. I am so excited — the community will be doing cartwheels down the Berrima main street. There has been a lot of tears over this, marriage break-ups, divorce — this has caused a great deal of anxiety. Hopefully it will help businesses struggling though COVID hang on and flourish.

Tweets by community members Seamus Byrne and Clare Press showed both the elation and growing frustration of many online:

Hume Coal mine project for Southern Highlands has officially been rejected. Feels like a rare win right now!

The IPC found that the greenhouse gas emissions were not justified ‘when weighed against the relatively minor economic benefits’.

However, Nature Conservation Council Chief Executive Chris Gambian was concerned that the overall issue of climate change was not properly addressed by the IPC, arguing that no new mines should be approved in NSW:

Yes, the water impacts of this ill-conceived project were extremely risky. And yes, the mine should have been rejected for these reasons alone.

But the fact the IPC barely touched on climate highlights the deficiencies of the planning system in coming to grips with the greatest environmental hazard we face.

The decision has been hailed as a victory for local community action. Groups such as Battle for Berrima have been active on the ground as well as online. The group celebrated the win on their Facebook page.

We would love to be celebrating with you tonight. Throughout, we engaged with the government planning process respectfully. Thank you everybody for your support, donations, volunteering and commitment. Hopefully, once lockdown is over, we can celebrate together. A massive THANK YOU to everybody

Community activist Jenny Hunter’s Twitter thread details the hard work that many locals put in over the 11 years of campaigning:

It’s a rare treat to tweet good news in the covid shitshow era but here we are. A Korean coal company has been refused permission by the NSW govt to build a coal mine 2km from the historic village of Berrima. We live in this cottage, built as an inn in 1834 … 1/5 pic.twitter.com/1Zhv9PrqgP

After the decision, Peter Martin, president of Coal Free Southern Highlands, posted to their Facebook page :

It’s been a ‘knock down and drag out’ struggle for the local community against the Korean steel maker which has used every weapon in its arsenal to push the project through against the determined opposition.

…Given the serious climate issues that we all face, it would have been a dereliction of duty for the State Government to let a coal mining project like this proceed. Coal is clearly at the end of its useful life.