The agreement could allow Belarusian authorities to target "critics abroad" 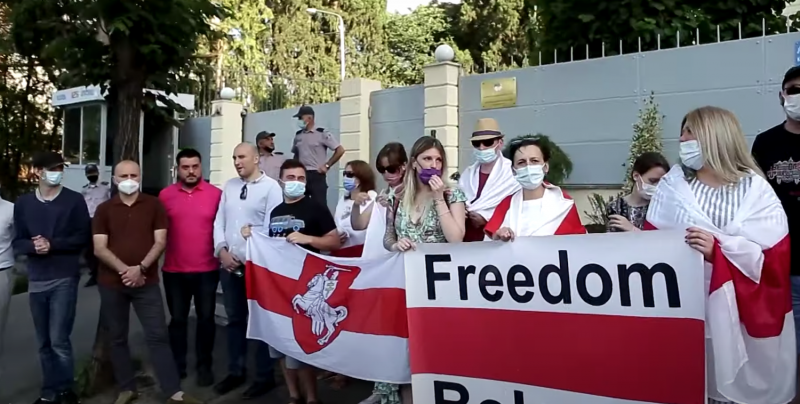 Belarusian, Georgian, and Ukrainian activists protest outside the Belarusian embassy in Tbilisi, Georgia, May 2021. Screenshot from video by RFE/RL on YouTube.

This article by Shota Kincha was first published on OC Media. An edited version is republished here under a content partnership agreement.

A year after disputed presidential elections in Belarus, a Georgian-Belarusian security cooperation agreement has come into force. Critics fear that the treaty could help Minsk target political dissidents currently residing in Georgia.

Belarusians that had fled to Georgia in the repressive aftermath of the disputed 2020 election in Belarus have voiced concern about a cooperation agreement between Georgia’s State Security Service (SSSG) and the State Security Committee of Belarus (KGB) that has entered into force this month.

With the agreement, the two countries are to regularly exchange information, including personal data of interested parties, to cooperate in the fight against “terrorism”, “corruption” and a number of other crimes, including those committed “against the constitutional order, sovereignty and territorial integrity” of the signatory countries.

The deal also includes cooperation in the fight against “transnational organised crime and international crime posing a threat to state security”.

Within the cooperation on these matters, Article 8.1 of the Agreement envisages sending “representatives/attachés” to the partner country “for a definite or an indefinite period”.

The Belarus-Georgian agreement came into force on August 1, 2021, days before Lukashenka's critics marked the anniversary of last year’s presidential election, held on August 9, 2020, and weeks after the European Union targeted the Belarus regime with harder sanctions in response to an intensified crackdown on civil society organisations.

He told OC Media that he estimates at least 100 Belarusians are currently in Georgia for political reasons.

“Therefore, only the complete termination of the agreement will guarantee the security of Belarusians in Georgia”, Tsikhanouskaya stressed.

Law enforcement and security agencies in Belarus have been repeatedly accused of launching politically motivated investigations to target government critics for years, designating, and outlawing the activities of, a number of civil groups, including media organisations,  who they labelled as “extremist”.

Dmitry Chernykh, Deputy Chairman of Belarusian Helsinki Committee told OC Media that the potential crimes that Georgia and Belarus agreed to jointly combat  — including terrorism and the financing of terrorism, as well as “crimes against the constitutional order, sovereignty and territorial integrity of the state” — are those “that many activists of the Republic of Belarus are accused of”.

“We assume that the security of activists in Georgia will depend on what position Georgia will take regarding the political situation in Belarus”, he said. “If Georgia supports the current regime in its agenda with regard to activists, the activists hiding in Georgia will be under threat”.

“Fortunately, the extradition is not mentioned there”, Belarusian journalist Aleksey Karpeka, who arrived in Georgia from Belarus in June, told OC Media.

However, the fact that the law enforcement agencies of Belarus will be able to get access to financial and other information of Belarusians in Georgia triggers negative emotions. Many won’t feel safe here anymore.

According to Marisha Korzh, a Belarusian civil activist living in Georgia, Lukashenka’s government targeting Belarusians in Georgia with “extremist” or “terrorist” designations could be too obvious for the Georgian authorities to play along with.

Instead, according to Korzh, Belarusian authorities could go after their critics by smearing them as potentially involved in dealing drugs or avoiding taxes, in order to retrieve their personal financial information from their Georgian counterparts. They would then proceed to engineer criminal cases.

“In this case, Georgia could actually send these people to Belarus without any sort of justification”, Kozh warned, and cited the criminal case against Ales Bialiatski, the Director of the Human Rights Center Viasna, a rights group active in Belarus.

In 2011, Belarusian prosecutors charged Bialiatski with tax evasion based on the financial information provided by Lithuania and Poland. Human Rights Watch has called the charges “unjustified and politically motivated“.

“The KGB can be quite creative in this kind of thing and I think Georgian security services and the government have to be very very alert and really aware about the consequences of what can happen”, Korzh told OC Media.

News of the treaty began to spread after it was published on state-run Belarusian legal portal Pravo on August 13, with Polish news agency Belsat breaking the story later that day. Swift condemnations from government critics in Georgia as well as from Georgia’s ally countries quickly followed.

“By bringing into force the agreement with the authoritarian regime of Belarus, Georgia will grossly violate human rights, Georgian legislation and its obligations under international treaties”, the Tbilisi office of international rights group Human Rights House warned on August 16.

The opposition parties Droa and European Georgia were among the first to condemn the treaty, with Droa stating that they were “horrified” by it, and European Georgia calling it “shameful”. The treaty was also criticised by Linas Linkevicius, former foreign minister of Lithuania, Estonian MEP Marina Kaljurand, and German MEP Viola Von Cramon, who expressed her surprise on Twitter.

Very scary indeed. Why does #Georgia implement an agreement after 5 yrs in a situation where everyone else in the world gave up the cooperation with #Belarus? GEO government must respect human rights &not extradite journalists & HR defenders to Lukashenka https://t.co/ZuNr8ozK9t https://t.co/nwZT8FABYA

Where are you going, Georgian govt? You withdraw from an agreement brokered by the EU, and double down on this agreement. Prove to us you have not cast your lot with bloody authoritarian regimes. Withdraw. Show you are with the West, not Putin’s East. https://t.co/FZgWbdN7UY

In response to growing criticism Georgia's State Security Service claimed on August 16 that they were targeted with a campaign of “discreditation”.

The SSSG also argued that Georgia already had similar treaties with the USA, UK and EU-member countries and that the agreement, originally signed in 2016, would not oblige Georgia to act against its “state interests”.

A provision in Article 5.6 of the Agreement states that each of the parties may “refuse to execute the request” from another party if it contradicts “human rights”, “national legislation” or “international obligations”.

Amnesty International underlined in their August 20 statement that this “vaguely formulated clause” left protection of human rights to the discretion of the security services of Belarus and Georgia.

Given the “troubling human rights record” of Belarus, the agreement, according to Amnesty International, “could potentially become yet another tool for Belarusian authorities to continue the harassment and intimidation of their critics abroad”.

Russia  19 hours ago
Cancel this reply