A Weibo supervisor was exposed for wrongfully censoring citizens 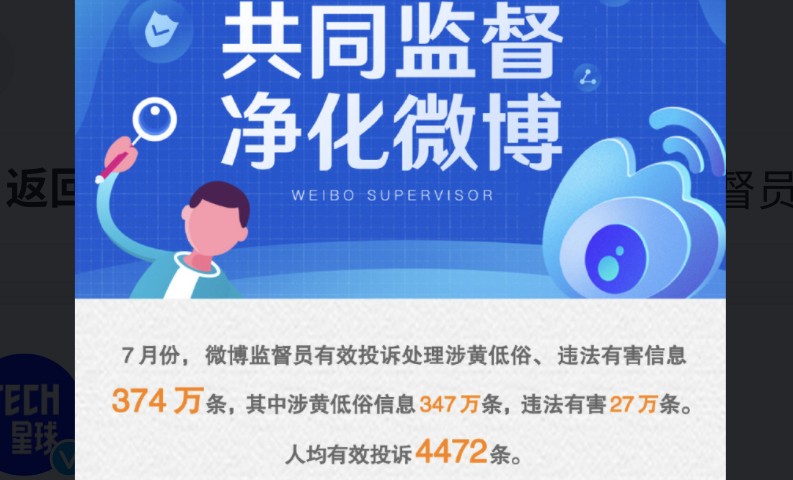 A screenshot from a Weibo supervisor's monthly report. The slogan says: ‘collective supervision to clean up Weibo’.

‘Why am I being censored?’ Many Chinese citizens have shared this question online after receiving a notification from administrators of online platforms including Weibo, WeChat and Douban, informing them that their content has been flagged as harmful or illegal and has been removed. Yet, no one has explained exactly why or how their materials were harmful or illegal.

Recently a ‘Weibo supervisor’ named Ji Haoyang wrote a series of posts bragging about his performance as a censor. These posts have inadvertently shed some light on the puzzle as to how and why material is sometimes identified as censorious. They have also revealed a system designed to encourage and reward censorship.

In 2017, the Weibo community management centre recruited 1,000 community members to report on harmful content. The team expanded to 2,000 in 2018. The Weibo user Ji Haoyang was one of these so-called supervisors.

On August 26, Ji boasted on his Weibo that he had successfully reported on another Weibo user, Tomo Jiangjiang, for lying about her mother’s death after receiving the first dose of the coronavirus vaccine. Ji claimed that Tomo’s post was a scam to attract sympathy and could have an adverse impact on the country. He further claimed that as a result of his complaint, Tomo was under police’s administrative detention and her account was suspended.

In her post, Tomo wrote that her mother had developed a rash five days after taking her first dose of the Sinopharm coronavirus vaccine on March 26 and died on June 30. She then expressed her sadness and thanked those who had given her treatment advice in the past few months.

However, Ji quoted a police source saying that Tomo’s mother was alive and at work as normal.

In response, Tomo registered a new Weibo account and posted her mother’s death certificate and cremation papers to prove that she had not lied.

Within two hours, Ji issued an apology saying that the false allegation had occurred because he and the police had misidentified Tomo Jiangjiang's phone number. But he did not explain what had caused the mistake or how he had obtained Tomo's Weibo phone number. Instead, he insisted that his report was justified. The China Digital Times captured a screenshot of this response:

In order to avoid the incident getting out of control, I have handed over all my posts and others’ comments to the public security authorities. Tomorrow I will file the case. There will be proper follow up. Regarding my comments which were made before I verified the identity of ‘Tomo’, I will visit the police station and file my apology. But the law will not let you use an excuse to defame the country. Please ask yourself if the death is caused by the vaccine. The foreign media outlets are quickly picking up the incident and we will see the result tomorrow. No one can run away from the legal consequences.

His response has attracted a backlash. On a Weibo news thread, many expressed outrage at Ji's words:

Ji acts like a warrior in his so-called apology. Using the ‘vaccine’ and ‘foreign media’ to justify his acts. If such people are in power, what would be the consequence?

So any mentioning about deaths after taking made-in-China vaccines is flagged as ‘political information that is harmful to the state’, that's why we can't see any related information. All we see is deaths after receiving foreign vaccines.

When patriotism has turned into an excuse for taking someone down, the mad dogs in this country are getting out of control.

On the same day, the official ‘Weibo supervisor’ account issued an announcement saying that the platform had removed Ji from the supervisor team and banned his user account, as he had violated the community’s code of conduct by ‘posting disinformation that disrupted communication order and damaged the reputation of Weibo supervisor.’ It also clarified that Weibo supervisors do not have the power to access users’ personal information and suspend user accounts.

But many pointed out that the platform operator itself is responsible for this censorship system. China Digital Times has collected some reactions along this line:

Weibo supervisors are just running dogs. Now that one performs badly, its master kicks it away.

One Ji Haoyang was blocked, but there are tens of thousands Ji Haoyang who are willing to give up their humanity for a few bones.

Some dug into Ji’s Weibo timeline and found out that the Weibo supervisors are managed through a set of key performance indicators (KPIs). They have to fulfill a minimum quota, filing 500 reports per month with a 90 percent well-grounded, in order to remain on the team. Ji had been facing pressure at work since April. They believed his behaviour was driven by such a censorship system. For example, a now-removed post said:

This Weibo Supervisor has revealed that they have to meet certain targets in filing reports. Each of them may have arbitrarily deleted others’ posts in order to complete their target. So horrible. This is alienation.

An IT blogger, whose posts in his commercial account had been hidden from public view recently, believed that the Weibo supervisor system was the cause of his problem:

I only realized that there is a report target in the Weibo supervisor system after the Ji Haoyang incident. That’s why since June 28, my Weibo, which has been open for more than ten years, has been regularly hidden from public view. I filed complaints to the Sina customer service but it did not solve my problem. Please take a look, which of my posts are harmful? Which Weibo supervisor ‘shot’ me? I am a paying customer with a very good social credit record — Sina Weibo, how can you treat your customers like this?

According to Sina's official explanation, the relation between Sina and the supervisors is not employer and employees. Instead, they are considered as active or rewarded community members. Once someone has successfully been recruited into the team, their accounts are verified, meaning that their posts would be more visible. They could participate in Weibo’s official offline activities and could receive a bonus according to their performance.  However, if they fail to meet the minimum target, they have to leave the team.

Weibo issues a monthly censorship report, which includes the performance of Weibo supervisors. According to its July 2021 report, Weibo blocked and deleted 244,000 harmful political posts and 9,877 user accounts through complaints. As for pornographic and illegal content, Weibo has deleted 2,771,027 user accounts and  7,700,000 posts through complaints, among which 3,740,000 were filed by Weibo supervisors. The system also automatically blocked 4,700,000 posts in July. The company will proactively submit illegal content to the police authorities to follow up on the cases.

A Weibo user applied a normal distribution model to analyse the data and estimated that the top Weibo supervisor would have to file 22,000 complaints per month, which means 700 complaints per day and 70 reports per hour in a 10-hour work schedule.