Transnistrian election fraud ‘a slap in the face of Moldovan democracy’ 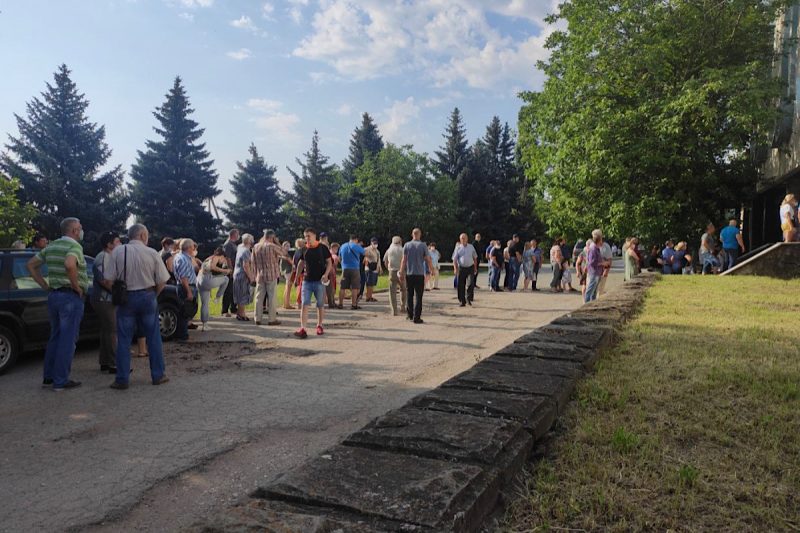 Voters from Transnistria waiting to cast their ballots in the Moldovan elections. Image courtesy of Ziarul de Garda.

Several voters from the breakaway region of Transnistria say they received money to vote for the Electoral Bloc of Communists and Socialists in the Moldovan parliamentary election held on 11 July. Some received the money before exercising their right to vote, and others after returning from the polls and presenting the ballot with the “voted” stamp on it. Others received the money they were promised from election observers.

In Moldova’s snap elections on July 11, 2021 the pro-Western Action and Solidarity Party founded by current President Maia Sandu won comfortably, gaining 63 of the 101 seats in parliament. The Electoral Bloc of Communists and Socialists (BECS), led by former presidents Vladimir Voronin and Igor Dodon, in a serious setback, won just 32 seats.

Transnistria (or Pridnestrovie) is a breakaway state on the border of Moldova and Ukraine that separated from Moldova in the early 1990s amid an armed conflict. The global community and Moldova do not recognize the de facto state of Transnistria, but consider it an autonomous territorial unit within Moldova with special legal status. In September 2016, the authorities of self-proclaimed Transnistria held a referendum, as a result of which they began preparations for joining the Russian Federation. Russian peacekeeping forces have had a long-standing presence in the republic, and the situation around Transnistria is often characterized as a “frozen conflict.”

The special missions that monitored last month’s electoral process also took note of allegations concerning other material rewards, and the organized transportation of voters, especially at polling stations open to citizens of the Transnistria region.

The scheme is already well known from past elections. After being put on a list, the people (whose votes were bought) were transported to polling stations by private car or taxi. The money was distributed on the way to the polling stations, while the people were in the cars, or as they left polling places. Some people openly admitted that they had sold their vote.

Groups on messaging apps that include people from the left bank of the Dniester river (Transnistria) say employees of private and public bodies  in Transnistria were urged to vote for the Communist and Socialist bloc in exchange for money. There are also allegations that lists [of people willing to sell their votes] were drawn up all over the breakaway region at the suggestion of managers of such institutions.

The early parliamentary elections had a turnout of 28,000 people at the 41 polling stations open to voters on the left bank of the Dniester. Sixty-two percent of them voted for the Electoral Bloc of Communists and Socialists. Many who voted for Vladimir Voronin and Igor Dodon took part in electoral tourism in the form of organized trips to polling stations on the right bank of the Dniester (Moldova proper). Along the lines of a scheme applied in past elections, some voters sold their vote in exchange for 200, 400, or even 500 Moldovan lei ($11–$28).

On election day, Dumitru Iancev, who lives in Tighina (a city in Transnistria, also known as Bender), said he learned of a group of people involved in voting fraud. In a video Iancev recorded in front of a store in Tighina, a man asks someone if “there will be a bus,” with the reply that “it will be only a taxi and only on registrations,” a hint at electoral tourism. The woman who made the lists of potential vote sellers, Vera, says she called everyone whose phone numbers she had from the last elections: “I called everyone’s number.”

Iancev, a former judge who worked in courts in Tighina and Taraclia (a city in southern Moldova), became aware of the scheme during the 2020 presidential election. For the July elections, he managed to be put on the lists [of people willing to sell their votes], was part of an organized transport to a polling station, and received 200 Moldovan lei ($11) for his vote.

Iancev reported the situation to the police, offering as proof the 200 lei and an invitation to the polls bearing the BECS logo. A criminal case was opened based on his complaint.

Also in Transnistria, there were cases of voters leaving polling stations outraged because they didn’t receive the promised amount for their vote. One woman emerged from the polling station in tears of disappointment.

Another voter from Causeni district (in central Moldova) was also in search of the promised 500 Transnistrian rubles, the equivalent of about 550 Moldovan lei ($30), which he was promised in exchange for a vote for BECS. He said the money was supposed to come from a veteran of the Dniester war (conflict between Moldova and Transnistrian separatists, 1990-1992), who pretended to be an organizer of electoral tourism.

Compared to the 2019 elections, when voters were transported by bus, this time, voters reached the polling stations by car or by taxi. Just like the voters, the drivers of the cars were also remunerated for the service they provided.

Information about vote-buying and transportation of voters from Transnistria began to appear on messaging apps both and after before election day.

People wrote that in exchange for money, many employees of private and public entities in Transnistria were urged to “vote with Igor Dodon.”

According to these posts, management of these entities gave the “order” for their employees to be included on certain lists of people willing to sell their votes. The messages seen by Ziarul de Garda say that such lists were drawn up on the entire territory of Transnistria, and mention certain enterprises including the Department of Public Education in Rabnita, the Moldovan Steel Works, the shops of the Sheriff sports group, and some hospitals.

Sheriff’s representatives refused to talk to ZdG and asked not to contact them again because “no one will answer these stupid questions.”

Another incident that indicates possible voting fraud took place in Russia, where an electoral observer notified the Moldovan Central Electoral Committee about voters being offered vouchers when leaving polling stations.

Three days before the elections, Dar pentru Moldova (Gift for Moldova), a bus company that runs between Russia and Moldova, announced it would offer free vouchers worth 1,000 Russian rubles ($13), to those who showed up on 11 July at certain addresses. Coincidentally or not, those were the addresses of polling stations open to Moldovans living in Russia.

During last year’s Moldovan presidential election, Dar pentru Moldova posted messages on its social media channels urging people to vote for “a president who will strengthen Moldovan-Russian relations,” a position embraced by Dodon. At that time, the company’s social media also reprinted Dodon’s electoral leaflets, a statement by Russian President Vladimir Putin supporting Dodon, and leaflets with fake news about the candidate of the Action and Solidarity Party, Maia Sandu, who won the presidential election.

When asked by ZdG, Mihail Cornea, a representative of the company, said the idea of ​​distributing vouchers “was meant to wake up the Moldovan diaspora in Russia, to urge it to go out in large numbers to vote. That was my message, it didn’t have a political bias, in the sense that it didn’t say ‘Go out and vote for a certain party or a certain candidate.’”

On the evening of 11 July, Marin Maxian, deputy head of the Moldovan General Inspectorate of Police, announced that police had received 562 complaints about electoral violations during the electoral period, including 236 complaints on election day. In 187 cases, the complaints came from representatives of parties on the ballot, including 177 regarding the transportation of voters to certain polling stations and attempts to persuade people to vote for a certain candidate.

According to Moldovan legislation, voter corruption is punishable by a fine ranging from 27,000 to 42,000 Moldovan lei, or imprisonment from one to five years. Legal entities can be punished for the same offense with fines ranging from 200,000 to 300,000 lei with further punishments including liquidation of the entity.

Promo-LEX, an NGO which has been monitoring Moldovan elections for years, reported 17 instances of “rumors, attempts, or even situations of material or monetary rewards” to influence voters within 100 meters of polling stations. Promo-LEX observers also noted 29 instances of organized transport of voters in coaches, minibuses, or other means of transportation.

Nicolae Panfil, director of Promo-LEX programs, says the association’s observers found multiple instances of voter transportation, frequently associated with cases of voter corruption. The clearest clues, he says, came from the Transnistria region. “This phenomenon is at odds with democratic norms and laws, and those who organized it should be identified and punished regardless of the number of cases that were reported,” he says.

The relatively small number of instances of apparent corruption that his association reported might not have been important for the final result, he adds, but they still represent “a painful slap in the face of Moldovan democracy.”

Daniela Calmis is an investigative reporter, and Victoria Borodin is a reporter with the Moldovan newspaper Ziarul de Garda, where a longer version of this article originally appeared. This article was translated by Ioana Caloianu and appeared on Transitions Online on August 30, 2021. It is republished as part of a content-sharing partnership.