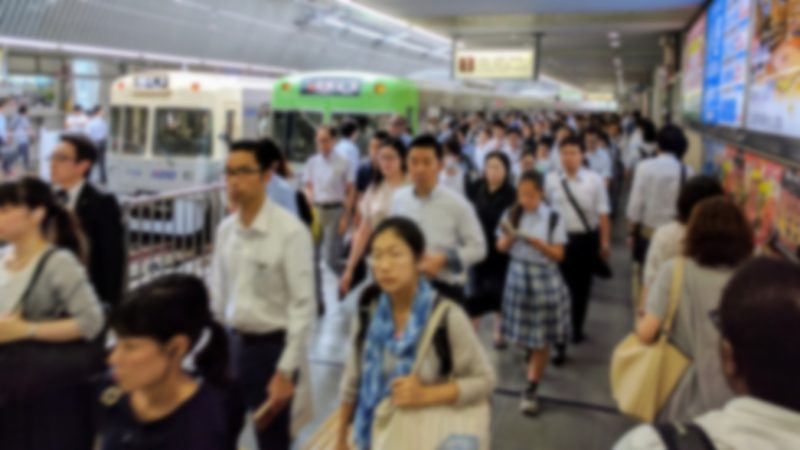 A commuter railway station in suburban Tokyo. On August 6, 2021, a man attacked 9 people on a train in Tokyo. Photo by Nevin Thompson, adjusted slightly to protect privacy.

A knife attack on a train in Tokyo in August has highlighted a culture of misogyny in Japan, while leaving some women fearful for their own safety on their daily commute.

On August 6, a 36-year-old man was arrested and charged with attempted murder after allegedly attacking passengers with a knife on a train on Tokyo's Odakyu commuter line. Four women and five men were injured in the attack, with one woman transported to the hospital with serious injuries.

When arrested, the suspect allegedly stated his motivation for the attack was that he was targeting women:

For the past six years, whenever I saw women who looked happy I wanted to kill them… Anyone would do.

Women in Japan regularly experience sexual assault in everyday situations, such as commuting. Following the attack, many women on social media expressed fear about their own commute in Tokyo and in other parts of Japan.

In the last year alone I’ve had a man grope himself on the train in my face, multiple men approach me on the street for sex, several follow me through stations and on roads, a man rub his genitalia on me on the crowded train. 14 years of stories I don’t have enough characters.

Various news outlets including wire service Kyodo and the Japan Times reported the alleged assailant “suffered” rejection in past relationships with women. In the days following the attack, more evidence came to light that the suspect had allegedly considered or planned even more attacks before being apprehended.

This is the guy certain publications wanted us to feel sorry for yesterday. hm. https://t.co/0aCrFRVP6y

Rather than focus on the suspect's lack of success in human relationships, some media commentators instead called out the attack as a “crime of misogyny” (ミソジニー犯罪), and as a “hate crime against women.”

Writing for Yahoo! Japan News, Ito Kazuko, a lawyer and secretary-general of Japan-based Human Rights Now, classified the attack as an (attempted) “femicide.”

While more details will become clear, assuming the remarks of the suspect are as reported, there are strong concerns that this is a hate crime against women and an [attempted] femicide. Women are growing more and more afraid.

“The common trait among mass shooters, serial killers, and other serial perpetrators of gendered violence is an intense hatred of women,” said Julia DeCook in an interview with Global Voices. DeCook is Assistant Professor in the School of Communication at Loyola University Chicago, whose research focus includes online hate groups, and race and gender, particularly male supremacism and masculinity.

“I don’t think [the Tokyo train attack] is an example of far-right extremism towards women, but rather a harrowing example of how violent and fatal misogyny and backlash against feminism and women’s rights is for women,” said DeCook. “The violent misogyny that women are subjected to in everyday circumstances and day-to-day is an example of how patriarchy exerts political control through these (often private) fear tactics and terror.”

Japan generally enjoys a reputation for personal safety, with 73 percent of people responding in a recent survey that they feel safe walking alone at night.

I think it's mostly a myth that Japan is a “safe country.” In our society, every day, women must live in fear of groping, sexual harassment, and the threat of being murdered. Who exactly is saying that “Japan is safe?”

In a 2019 report by the Japanese government, 65 percent of women who responded reported experiencing groping, unwanted touching, and similar kinds of sexual assault, commonly experienced on crowded trains.

By some estimates, over 95 percent of incidents of sexual violence in Japan are not reported to the police. A 2019 report by the Japanese government found that sex crimes continue to be significantly underreported in Japan, with just 14 percent of women who experienced sexual assault reporting the incident to police.

According to statistics published in 2021 by Japan's National Policy Agency, the number of reports of gender-based crimes, such as stalking and domestic violence, has increased in Japan over the past twenty years. This increase in reported crime has occurred since legislation was enacted to address stalking in 1999, and domestic violence in 2001.

Some forms of violence against women still go officially unreported by the National Police Agency — as of 2021 there is still no law criminalizing non-consensual sex (in contrast, “forcible sexual intercourse”  and similar offenses are only recognized as such under Japanese criminal law if they are committed through “assault or intimidation.”)

As well, not all women will report their experiences to the police.

“In Japan, women tend to not report the abuse that they suffer in, and police are notoriously not that helpful in these kinds of cases,” said DeCook.

This is not unique to Japan, but rather an experience that women all over the world face, according to DeCook.

“We can see this in cases of rape and domestic violence where perpetrators are given laughably short sentences, just face fines, or are even still allowed access to weapons and firearms even after being charged with domestic and sexual violence,” she said. “These are all influenced by the logic and terror of misogyny. All of these things combined deter women from being able to fully live and participate in all areas of life.”