Fishers and shellfish gatherers are concerned about environmental damage

This text was written by Eduardo Machado and originally published in February 2021, by Agência Mural. It is published here via a content partnership between Global Voices and Agência Mural.

One of the largest industrial ports in Brazil’s northeastern Bahia state, Aratu Port, has been impacting the life of the community in the area.

Fishers, shellfish gatherers, and quilombolas in Ilha da Maré are concerned about the environmental and socio-economic impacts to the region. They worry that the contamination of the sea, rivers, and mangroves has prevented these families from producing their own food and selling it.

The term quilombola refers to people who are part of communities of African descendent that date back to enslaved Brazilians who escaped and created spaces of resistance, known as quilombos in Brazil. These communities maintain a strong connection with their history and heritage, preserving customs and cultures from their ancestors. There are more than 500 quilombola communities in Bahia alone.

Eliete Paraguassu, 41, a quilombola counselor and shellfish gatherer from the Porto dos Cavalos village, says that the local communities have been suffering for decades from contamination by chemicals produced by the companies that lease the port of Aratu.

Paraguassu said that several complaints against the pollution in the area were made and sent to agencies such as the United Nations, Amnesty International, and the government's Human Rights Commission, in Brazil.

“This pollution is an invisible monster. We have several documents, a report, and several partners that help us, but the pandemic led to a non-response to the problem,” she explained.

Among the impacts listed in the report are the loss of medicinal plants, such as aloe vera and the Brazilian pepper tree (known as aroeira); environmental contamination, especially of water; and the disappearance of fish, such as the Maria Preta fish, and shellfish, such as chumbinho.

The residents also point out that trucks dump waste on the road, encroaching on the mangroves and killing the animals.

According to the Centre for Liquid Effluent Treatment (Cetrel), a private company in charge of managing contaminated areas in large industrial complexes, several chemical substances, which are classified by Brazil's National Environmental Council (Conama) as dangerous or very dangerous, were detected.

Inaugurated in 1975, Aratu Port is an extension of the Aratu Industrial Centre and the Camaçari Industrial Complex. It is one of the country's most important outlets for chemical and petrochemical production, accounting for 60 percent of regional profits, as well as handling cargo for the Bahia State Docks Company (Codeba).

According to the company, the port manages a wide variety of goods, simultaneously handling products such as iron ore, manganese, copper, urea, fertilizers, naphtha, propylene, and copper concentrate.

According to local residents, chemical waste from local industry is disposed of through pipes in the waters of Aratu Bay.

For Maria de Fátima Lima Pereira, 63, a fisherwoman and president of the collective restaurant Tempero do Quilombo (Quilombo’ Spice), in Alto do Tororó, which works as a kind of cooperative enterprise, the industrial developments in the area have worsened the quality of life there and transformed the place from a rural to an urban community.

She grew up in Maré and recalled that this began when she was 10 years old. “The mangrove was damaged. It became sandy. The mud that was pure, medicinal, turned into rotten mud,” she said.

Pereira blames the companies for destroying Matuím, a fenced-off mangrove forest that is an important habitat for various animals such as shrimp, fish, crustaceans, and mollusks.

“They chose this place to dump their waste because what they call evolution, I call destruction. Nobody cares about the communities. They make money and the people get sick, waste away, and die,” she said.

Marcella Gomes, a biologist and educator living in Ilha de Maré, highlighted the possible consequences and risks to the region’s Quilombola and fishing communities. “A lot of these contaminants are carcinogenic,” she observed. 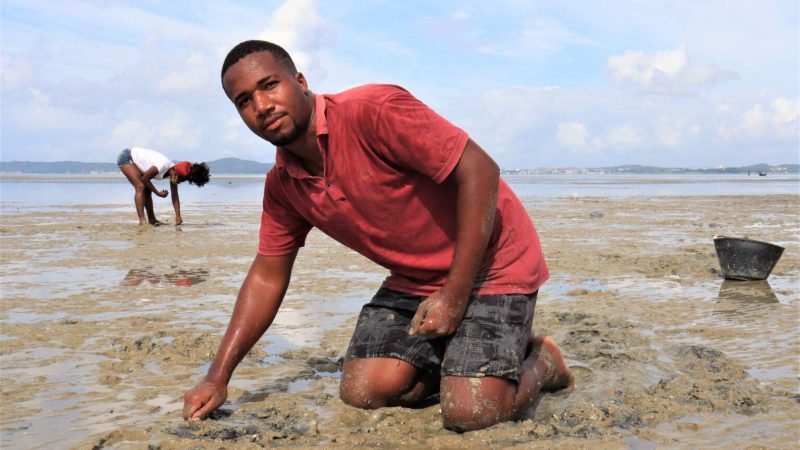 Gomes also pointed out other environmental changes. “The polluting substances, especially in the long term, cause impacts to the marine ecosystem with alterations in water quality and in the dynamics of the trophic chain, as the death of some of the more vulnerable organisms unbalances the entire food chain.”

Alex Santos da Silva, 19, a shellfish gatherer and resident in the quilombola community Bananeiras near Aratu's port, is one of the few men in the shellfish industry in Pecém, Praia Grande district. For him, these impacts are already noticeable in the local flora.

“The mango, lemon, and jackfruit groves are all dying because of pollution. I don't know the substances, but Aratu port has been devastating them,” he said.

The quilombola communities of Ilha de Maré and Alto do Tororó have been fighting for the recognition of their ethnic identity and the demarcation of their traditional lands since the early 1990s.

Around 400 families of the traditional communities of Ilha de Maré in the districts of Bananeiras, Martelo, Ponta Grossa, Porto dos Cavalos, and Praia Grande were officially recognized between December 2004 and September 2005, by the Palmares Cultural Foundation, an agency linked to the Ministry of Citizenship, responsible for registering and issuing official documents for quilombola communities.

However, Incra (National Institute of Settlement and Agrarian Reform) has yet to demarcate the quilombola lands that have already been recognised and certify them.

The Ilha de Maré Quilombola Territory, which covers 644.7 hectares, is in the metropolitan region of Salvador. The history of these communities is entwined with the known and unknown histories of Brazil, as it is located where Portuguese colonization began — a safe haven of fertile lands for production on land and water.

With the killing and displacement of the Indigenous peoples and the trafficking of Africans, enslaved Black people who fled from the sugar mills made this their “place on the Island.”

Fernanda Bianca Gonçalves Galo, a history graduate with a Master's degree in Ethnic Studies from the Centre for Afro-Oriental Studies (Ceao), questioned the violation of the quilombola right to prior consultation. Despite the land area being recognised by the Palmares Foundation and the territory being an Environmental Protection Area (APA), she argued that there are industrial centres which have developed in the region at the expense of this “sacrificed zone.”

She stated that none of the quilombola or fishing communities in the region were consulted. “One of the factors that contribute to this non-recognition or silencing is the large companies that are here in the surrounding area. There is development, but the communities are not listened to, and, obviously, because they are populations that are of no interest,” she said.

In a statement, the Institute of Environment and Water Resources (Inema), an organization from Bahia's state government, said that it monitors water quality through its Technical Directorates in Aratu Bay, working with various environmental activities to monitor the companies operating in the region.

The institute also said that it is currently carrying out studies on the region, as well as verifying compliance with the regulations that it issues.

Codeba claims there are no “petrochemical industries” operating within the Aratu-Candeias Organized Port, and so there is no “processing” of chemical products.

Understanding that the environment belongs to the public, to be safeguarded and protected, the company says it systematically takes action in line with good environmental practices in the Aratu Port area, including Ilha de Maré, in compliance with the legal standards established for port activities.