Controversial company is under investigation for tax evasion, money laundering

This story by D. Mishev was originally published by CIVIL Today, an English edition of the media platform CIVIL Media. An edited version of the translation by Natаša Cvetkovska is republished here with permission of CIVIL – Center for Freedom.

For four days, from August 16 to August 19, the employees of TV Alfa, a private television station with national broadcasting  concession in North Macedonia, conducted a partial strike by reducing the format of newscasts – they were conducted without live stream from the studio and using only archive footage.

This move came after the the employees sent a letter to the management and the shareholders of TV Alfa on August 11, demanding payment of their salaries and other expenses. The letter contained a warning that the cameramen would stop going on the ground from August 16, and that the information content would be reduced to ten minutes.

Since that day, each TV Alfa news cast begun with a black screen showing the following announcement: 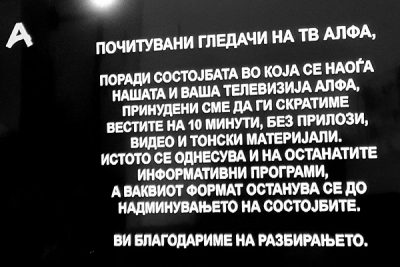 The black screen with the information about the partial strike shown before Alfa TV newscasts. Screen capture by CIVIL, used with permission.

Due to the situation of our and yours TV station Alfa, we are forced to reduce the news to ten minutes, without video and audio material, and the same also refers to other information programs. Such format will continue until the situation has been overcome.

We thank you for your understanding.

The reason for this, as was said in the warning letter, signed by the “Employees in TV Alfa”, is the delay of two salaries, health insurance and fees for three months, which “causes revolt among the employees”. 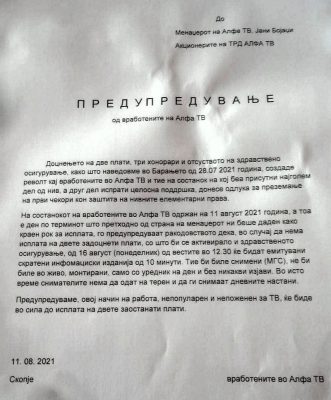 According to the leaked letter obtained by CIVIL Media, at the August 11 meeting, which had been attended by most of the employees, a decision had been made for “taking the first steps to protect their elementary rights.”

The employees held the emergency meeting a day after the deadline set by the Alfa TV manager for payment of “three monthly salaries, two honoraria and related health insurance benefits,” because that promise remained unfulfilled.

CIVIL Media tried to contact TV Alfa management, in order to obtain information about the newly-created situation, but nobody answered the telephone number posted on their Facebook page.

The strike seem to have ended by Friday, February 20, when at the 9:30 am morning news cast, the anchor Ana Todevska welcomed the viewers stressing that they are watching “the first live edition of TV Alfa news.” No further official explanation was given in regard to the situation and return to the usual format of the program coverage.

The recordings of the news items from the strike period, containing the black screen with employees’ warning message, have been removed from the Alfa TV news YouTube channel.

A history of controversies

In February 2021, TV Alfa was part of a scandal related to the misuse of taxpayer money from the state fund for mitigation of the economic effects of COVID-19 pandemic, providing subsidies to companies to supplement salaries of their workers.

On February 8, CIVIL Media reported that documents made public under government policies for increased transparency indicated that TV Alfa was among the companies that received state assistance, but did not pay salaries to their employees.

According to the list published on the website of the government, Alfa TV received state support of 22,328 US dollars (1,175,820 Macedonian denars) for the month of December 2020 to supplement the salaries for 102 employees. However government audit found out that the money were not paid to the workers by that time.

In addition, it emerged that the company-owner of TV Alfa was accused of tax evasion, as Prizma , a Macedonian language website run by the Balkan Investigative Network (BIRN) reported at the end of march this year.

Previously, in 2018 much was written also about Oliveri oil company and the multi-million scheme, for financing black propaganda aimed against the Macedonian European integration.

At the time, the Organized Crime and Corruption Reporting Project (OCCRP) reported that “Hungarians with links to the country’s pro-government media have embarked on a mass buy-up of news outlets in Macedonia, part of what appears to be a concerted push into the Balkans by media companies loyal to right-wing Hungarian Prime Minister Viktor Orban.”

Another country targeted with Hungarian media investment surge besides North Macedonia is Slovenia, where it aided the efforts of right-wing government led by Orban's ally Janez Jansha to undermine free media.

CIVIL media monitoring, as well as the European Parliament report Mapping Fake News an Disinformation in the Western Balkans and Identifying Ways to Effectively Counter Them, have noted that TV Alfa often publishes politically biased disinformation. This includes slander and insults against organizations for human rights and freedoms, and against journalists, including numerous attacks against CIVIL and its individual members.

Despite this, CIVIL expressed solidarity with the demands for respecting the worker’s rights of media workers in TV Alfa.

As noted in the study on COVID-19 related disinformation in North Macedonia by Metamorphosis Foundation, in 2020 TV Alfa content was used to disseminate confusing and unfounded claims about the pandemic across the Balkans, as reported by Serbian fact-checking  service Istinomer. Тhe Critical Thinking for Mediawise Citizens – Crithink project reported that Alfa TV promoted distrust of government anti-pandemic measures including the contract tracing mobile application StopKorona! through a late night talk show. Al Jazeera reported that that campaign was run in collusion with a troll army linked to right wing political parties.

During the period of state capture 2010-2017, the right wing regime run by the political party VMRO-DPMNE led by then-Prime Minister Nikola Gruevski was especially generous towards TV Alfa. The government siphoned over 26 million euros taxpayers money into private media during that period , with 95 percent of this amount ending up on the accounts of three TV stations with national broadcasting concessions: Sitel, Kanal 5 and TV Alfa.

Gruevski was later convicted of corruption  and fled to Hungary, under protection of Orban, where he  received political asylum. He had taken an undisclosed amount of money from the country and has recently registered a company there.