An AI typo brings some much-needed levity to nation's capital 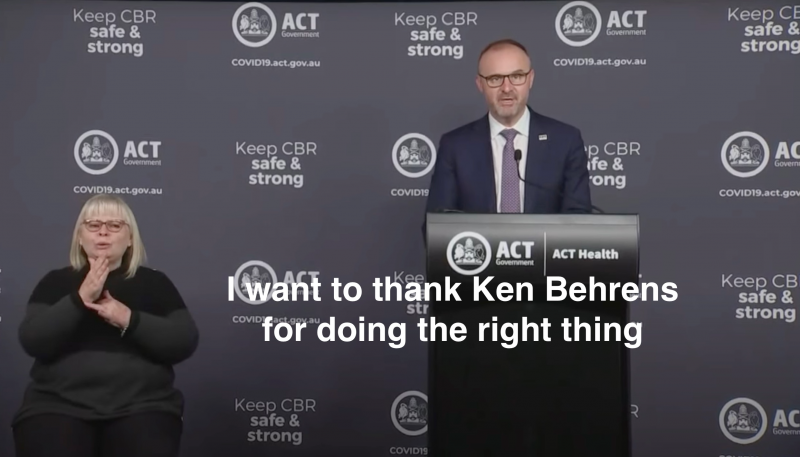 Every pandemic should have at least one accidental hero. In Australia’s case, the honor has been awarded because of a transcription mistake. When the Australian Capital Territory’s chief minister Andrew Barr thanked the people of the capital city Canberra on August 13, 2021, for their commitment to stay home during the COVID-19 lockdown, he could not have anticipated the consequences.

Mitch Bowey was tasked with captioning the footage from the media conference. He used a voice-to-text Artificial Intelligence (AI) software to transcribe the word “Canberrans.” The AI suggested a bizarre rendition, namely “Ken Behrens.”

Mitch admitted that he missed the error:

Are you the real Ken Behrens? Do you live in Canberra? Are you the real hero that the Chief is praising at the presser? If so, my DMs are open pic.twitter.com/VXoySHsIEi

Once social media users noticed the mistake, it became a viral meme — one that quickly took on a life of its own. Some even joke that it may end up as an Australianism entry in the Australian National Dictionary, alongside classics like, “doing a Bradbury.”

The gaffe has generated lots of online merchandise, including T-shirts, coffee mugs and cushion covers heralding “We are all Ken Behrens.”

We are all #KenBehrens ?? pic.twitter.com/cHMOkq5hj5

Local Canberra media also joined in on the fun:

A new edition of #KenBehrens Weekly available today, online & in limited stands across the ACT. Get your free copy! pic.twitter.com/vfocf0soNQ

So where did this odd predictive text come from? It turns out that there is a flesh and blood Ken Behrens. Originally from the United States, he now lives in Madagascar where he is a wildlife photographer. Pre-COVID Ken worked as a natural history tour guide and wrote a number of natural history books. He was interviewed by Her Canberra's Ginger Gorman after she “found him”:

In response to Chief Minister Andrew Barr’s kind words, I’d like to say “You’re welcome” ;p. Though please don’t tell him that I’m not actually at home right now!

Ken became a co-host of the podcast “Naturally Adventurous” in July 2020. Though he is pretty well-traveled, he hasn't yet made it down to Australia.

Ken is thrilled by his honorary citizenship in Canberra and has discussed the mix-up on his social media accounts. He also shared information about a free Donut Day creation that had been made in honor of “Ken Behren.”

Donut day down under often indicates zero COVID cases — an obvious cause for celebration during a lockdown. A truly worthy prize for Australia's new favorite hero.