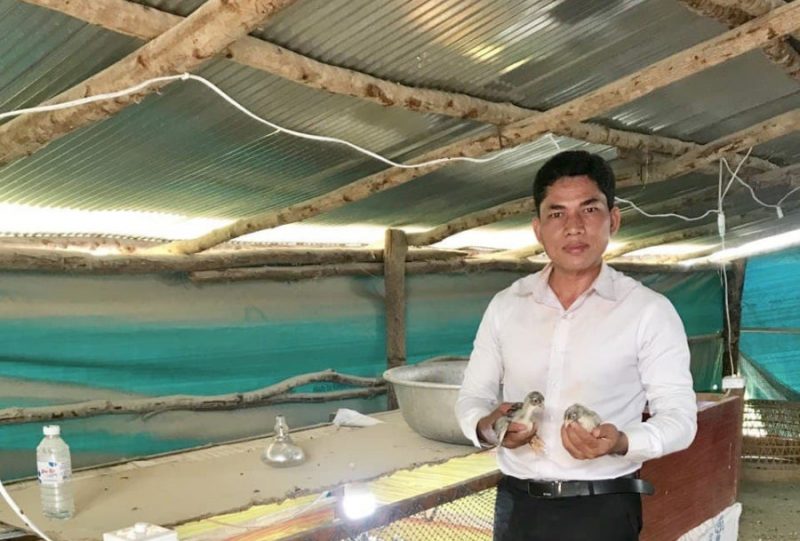 Ny Nak wrote on Facebook that he will declare a “state of emergency” in his chicken coop. Source: Facebook

On December 7, 2020, Nak posted that he intended to declare a “state of emergency” in his chicken coop — appearing to mimic a speech Hun Sen made the same day. He was arrested by the police on December 12 and charged with “insult” and “incitement.” He was denied bail in January and convicted on August 19.

Ny Nak is an agricultural entrepreneur who often posted critical comments on the government’s policies on his popular personal Facebook page.

While Ny Nak’s post was intended to be funny, it sparked widespread controversy. Here’s an excerpt of what he said:

I have already prepared or drafted a letter and documents to request that my chickens be placed in a state of emergency due to the fact that the bird flu virus is spreading on the farm. I do not want to think about this because it is seriously damaging the economy of the chickens. I hope that all the chickens will be able to wear masks and sleep in cages. Do not go out unless necessary.

Authorities who saw the post insisted that it violated the law because it was ‘defaming’ Hun Sen, who delivered a speech about the impact of placing the country under a state of emergency because of the surging COVID-19 cases at that time.

Agriculture Minister Veng Sakhon said the post could have caused panic because it mentioned  the bird flu:

By mentioning the bird flu, it could affect our people’s incomes as they may be paranoid to a point of stopping the rearing [of chickens] amid our efforts of a gradual economic recovery.

Justice Ministry spokesperson Chin Malin disagreed with some reporters who think that the Facebook post is simply being satirical:

This is your outsider judgement. Authorities and the prosecutors have grounds to specify that this is a crime and this is not an expression of a viewpoint. It is based on the ill-intention of the perpetrator in the past and recent actions that led to the charge.

After Ny Nak’s arrest, political analyst Lao Mong Hay said that it reflected the precarious state of the country's democracy:

In a liberal and multi-party democracy that guarantees human rights and respects the law, Ny Nak’s act would not be regarded as a criminal offence. The Cambodian Criminal Code also does not consider this comedy to be a criminal offence.

Chak Sopheap, executive director of the Cambodian Center for Human Rights, warned that the arrest would have a chilling effect on society

This has a detrimental impact on Cambodian society, as it deters individuals from public participation and fosters a culture of fear and self-censorship. Ultimately self-censorship in Cambodia results in the public being excluded from vital dialogues about the governance of the country, and extinguishes an important safeguard for government accountability.

[Arresting people] “serves nothing more than increasing fear among the people to share information or participate by expressing their views” @sopheapfocus said. https://t.co/ienzecqdMp

This verdict yesterday is a message that makes those who have constructive ideas or criticisms in relation to social issues be fearful and hesitant and will limit their freedom of expression…For a democratic country, if it is missing the sharing of ideas in a constructive way, it will not be able to progress quickly.

Ny Nak’s case is an example of what media and human rights groups have called an intensifying suppression of dissent in the country and the use of emergency laws to silence critics.