Woman breaks record for lying down at resting contest in Montenegro

The contest celebrates the stereotype of Montenegrins as lazy 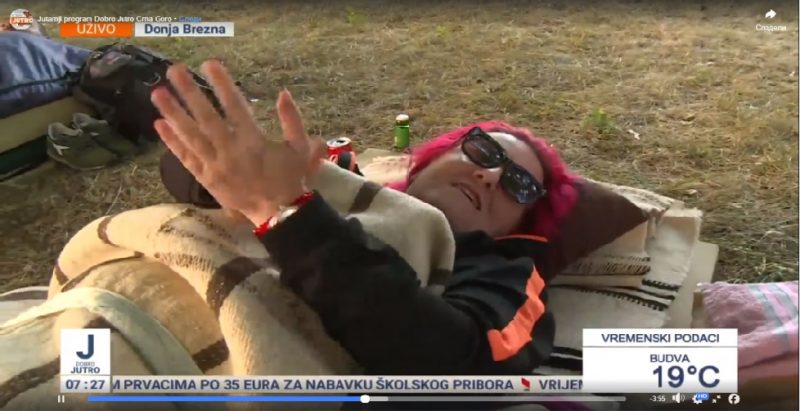 Brezna Ethno Village Montenegro, a hospitality complex located at the village of Donja Brezna in Montenegro, organized the traditional lying down contest during the last week of August 2021. For the tenth time, the competition poked fun at the widespread stereotype that Montenegrins are lazy. Contestants were supposed to lie down on the ground for hours, which turned into days.

Montenegro’s public broadcasting service (RTCG) reported that, even though the world record was broken on August 24, the three remaining contestants continued to compete, i.e. they continued lying flat in order to win an award of 300 euros (around 353 US dollars).

Radoje Blagojević, the owner of the Montenegro ethno village and contest’s organizer, stated for RTCG that three contestants broke “the world record, set two years ago.”

The breaking of the record probably came as a direct result of a change in the rules from previous years—allowing contestants to go to the toilet. 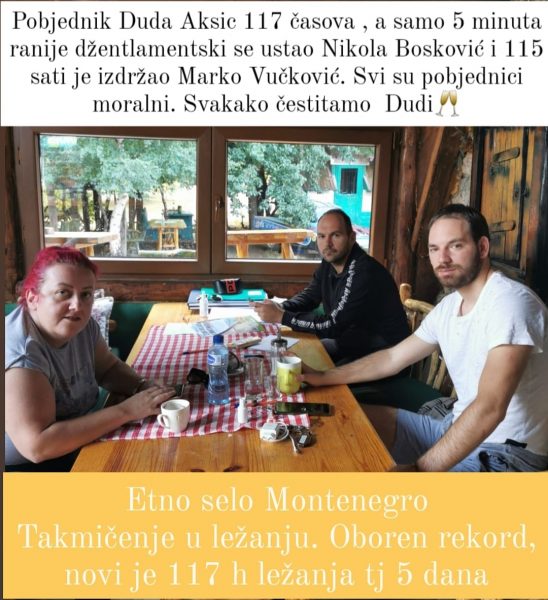 Photo by Ethno Village Montenegro Facebook page. The  embedded text reads: “The winner is Duda Aksić with 117 hours. Nikola Bosković gentlemanly got up only 5 minutes before, and Marko Vučković lasted 115. They are all moral winners. Congratulations for Duda! Lying Down Contest at Ethno Village Montenegro. New record – 117 hrs or 5 days.”

Two young men from Nikšić and a woman from Podgorica were vying for the new record. On August 25, the winner of the contest emerged, a lady from the capital, Dubravka “Duda” Aksić.

Aksić managed to lie down for 117 hours. The other finalist  Nikola Bošković got up five  minutes before her, while the third finalist Marko Vučković gave up two hours before them, Vesti newspaper reported.

The winner stated for Vijesti:

It was really hard, especially at 3 am last night when a heavy rain started. It was cold, even though we used  additional blankets. Otherwise it become too boring to continue, and our  bodies began to ache from lying down, so we attempted to invoke rain so it would be the judge, and so it came to pass. If  it wasn't for the rain, we would have remained some more time.

Before the end of the contest, the organizers upgraded the top prize to 350 euros (around 412 dollars).

Duda Aksić stated for Vijesti that she intends to spend the money to party with friends and to buy something to keep as memento of the contest, which  showed her that it's not easy to lie down all the time.

Part of urban folklore in the region

Stereotypes about Montenegrins being lazy are part of the common urban folklore in the countries that comprised Yugoslavia, which also contains jokes based on stereotypes about ethnic communities or inhabitants of particular regions as cunning, base, stingy, boastful, hedonistic, etc.

One instance of that kind of humor are the decades-old Ten Montenegrin Commandments (Deset crnogorskih  zapovjedi) which use the format of the Biblical Ten Commandments. Their author is anonymous. 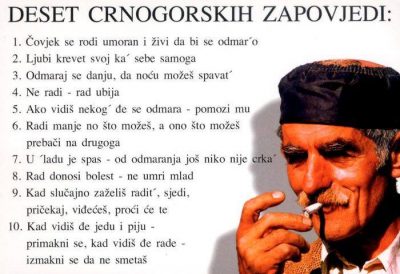 A widely spread meme with the Ten Montenegrin Commandments.

Montengrins are also famous for being valiant and chivalrous, and they have owned this kind of jokes, using them as graphics on souvenirs (mugs, t-shirts, posters) as well as internet memes.

One of the many favorite jokes told by Montengrins also concerns the difficult work of lying down:

American film director Steven Spielberg was shooting a movie in Montengro and invited locals as extras. He  hired two Montengrins and explained to them that their task is to lie under a tree.
So the two Montenegrins worked for two days. On the third day Spielberg told them that for the new scene  they have to move under another tree.
The older Montengrin responded: “Alas Mr. Spielberg, we are indeed extras and actors, but we are not stuntmen!”